Adisseo Spain presents its 2019 survey of mycotoxins in maize

The survey aims to determine the quality of Spain's maize harvest in 2019 in terms of mycotoxin contamination.

Mycotoxins are secondary metabolites of molds that have adverse effects on humans, animals, and crops that result in illnesses and economic losses. The contamination of foods and feeds with mycotoxins is a significant problem worldwide. Aflatoxins, ochratoxins, trichothecenes, zearalenone (ZEN), fumonisins (FUM), tremorgenic toxins, and ergot alkaloids are the mycotoxins of greatest agro-economic importance. Some molds are capable of producing more than one mycotoxin and some mycotoxins are produced by more than one fungal species. Mycotoxins have various acute and chronic effects on humans and animals depending on species and susceptibility of an animal within a species. The economic impact of mycotoxins includes loss of human and animal life, increased health care and veterinary care costs, reduced livestock production, disposal of contaminated foods and feeds, and costs associated with investing in research and applications to reduce severity of the mycotoxin effects (Zain, 2011). 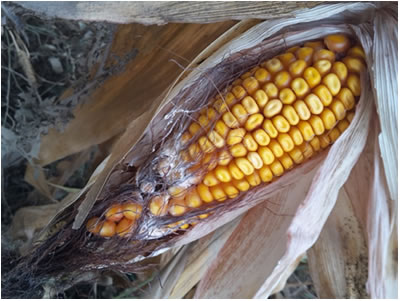 The 2019 ADISSEO mycotoxin survey included 44 maize samples from across Spain. All samples were collected almost immediately after the harvest from farms or animal feed production sites. Sample providers were advised to follow the principles of good sampling (Richard, 2000). Analytical personnel and/or laboratory staff were not involved in the sampling and did not influence any part of this procedure.

More than 170 analyses were conducted to test for the occurrence of the four mycotoxins most frequently found in agricultural commodities intended for animal production. The survey provided an insight into the incidences of aflatoxin B1 (AfB1), ZEN, deoxynivalenol (DON) and FUM (includes fumonisin B1 and fumonisin B2).

All four mycotoxins were analysed by Enzyme-Linked Immuno-Sorbent Assay (ELISA). For the purpose of data analysis, non-detection levels were based on the limits of quantification (LOQ) of the test method for each mycotoxin: AfB1<1 μg/kg; ZEN <5 μg/kg; DON <18.5 μg/kg and FUM <222 μg/kg.

The results showed that 20% and 43% of the maize samples were contaminated with FUM and DON, respectively (Table 1 and Figure 1). Only 5% of the samples contained AfB1 which was an unexpected low incidence of contamination. Unexpectedly, 33% of the samples contained ZEN, a mycotoxin than can affect the fertility performance of most animal species.  This incidence is lower in comparison to the previous year when 47.05% of samples were positive for ZEN. More than half the samples were concurrently contaminated with 2 to 4 mycotoxins which could lead to synergistic interactions among them (Figure 2).

The average concentrations of all recovered mycotoxins were low to medium (>LOQ but below EU recommendation levels). The highest concentration of DON detected in one of the samples reached 1302 μg/kg (Table 1). 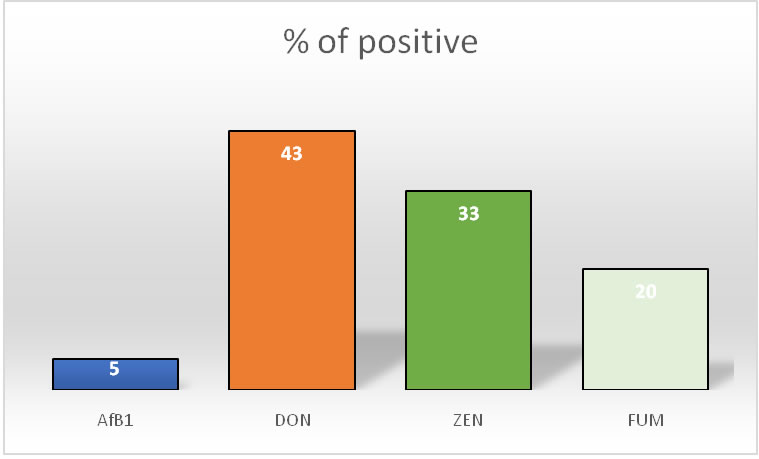 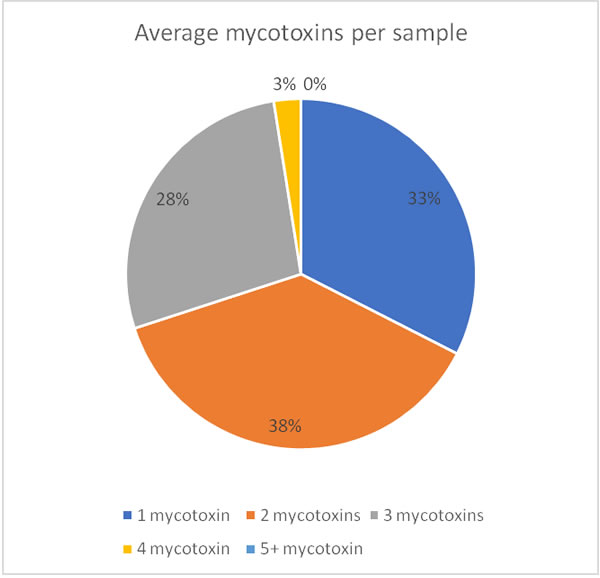 Figure 2 - Number of mycotoxins per sample

The ADISSEO 2019 mycotoxin survey concluded that the year's harvest of maize in Spain was of good quality (>LOQ but below EU recommendation levels) in terms of mycotoxin contamination (DON, ZEN, FUM, AfB1). In addition, the maximum concentrations of AfB1 did not exceed the concentration of AfB1 permitted in animal feed in the EU.  Despite the good results of this year's survey, the 2019 maize crop in Spain should not automatically be considered safe for inclusion into finished feed rations and a degree of vigilance is prudent.

Vigilance is always advisable as cereals in animal feeds originate from many sources.  The last possible line of defense is the detoxification of mycotoxins in vivo. The addition of proven mycotoxin deactivators to animal feeds is a very common method to prevent mycotoxicosis and is an effective strategy to keep mycotoxin risk low under any and all conditions.

Video >
Technical Paper >
Early nutrition programming (in ovo and post-hatch feeding) as a strategy to modulate gut health of poultry
Healthy gastrointestinal tract (GIT) is crucial for optimum performance, better feed efficiency, and overall health of poultry. In the past, antibiotic growth promoters (AGP) were ...
What is the impact of diet on nutritional diarrhoea associated with gut microbiota in weaning piglets: A system review
Weaning is sudden and stressful and one of the most challenging periods in a pig's life. Newly weaned pigs are usually stressed by nutritional, psychological, environmental, ph ...
Feeding of brewers' yeast derivatives in calves enables excellent start in life
Due to their immature immune system calves are very susceptible to intestinal and respiratory diseases in the first weeks of life. Challenges, e.g. adverse climate conditions or so ...