eNewsletter
January 9, 2015
Beans, palm trees and greenbacks: Deflationary clouds on feed market horizon before looming USDA report
Biofuels, rising US dollar poised to transmit crude oil deflation into the feed market. Currency changes make palm's recent rally less than it seems.
By Eric J. BROOKS
An eFeedLink Hot Topic
Unless next week's USDA WASDE report swings a very big supply-side surprise, a new round of corn market deflation appears to be on the horizon. Taking into account the factors described below in mind, the first week of January saw CBOT corn futures fall some 3%, to just below US$4.00/bushel. While a surprise can always occur, at this time the odds favor more deflation ahead.
Oil, ethanol, Latin currencies circle market
Oversupplies of everything from crude oil, ethanol, Latin American corn, --and even Latin American currencies are once again exerting deflationary pressure on corn.
From October 2012 to October 2014, corn prices fell by 60% but oil prices only declined 10%. This greatly widened the spread between ethanol's selling price and the cost of corn feedstock, which fell by a far larger amount.

By boosting ethanol returns, its production was stimulated and with it, the demand for corn. At a time when Brazil and America produced record harvests within a year of each other, rising ethanol production boosted US corn consumption higher than it would have otherwise have been. This helped keep inventories below analysts' projections, and gave corn valuable market support.
However, from October 2014 through early January 2015, after bottoming out near US$3.20/bushel, CBOT corn rebounded by over 25% to over US$4.00/bushel, while crude oil prices fell 50%. To make matters worse, the start of the year saw February 2015 US gasoline futures down by 25% while ethanol futures fell only 12%.All this made ethanol far less cost-effective than before.
With demand wilting, ethanol inventories entered January at their highest level in over two years, meaning that less corn will than expected will be used for biofuel production. A future downtrend in ethanol production -and biofuel-based corn demand- can already be seen. In early January's USDA numbers, ethanol output was 2% below its 10-week running average and 2.5% below its 4-week running. Obviously, the oil price crash has only started impacting ethanol output, distillers' corn demand has nowhere to go but down, and the rate of output decline is accelerating.
None of this is too surprising. According to senior UN FAO economist Abdolreza Abbassian, "The drop in oil prices obviously makes ethanol production less attractive, implying "bearish price trends for commodities that can be used for biofuels."
With this in mind, analysts now expect the mid-January USDA report to downgrade the US harvest several million tonnes less than expected. Add to this several million fewer tonnes of corn consumed by ethanol makers, a looming, large Latin American harvest and corn can't help but feel downward pressure on its price.
Currency plunge keeps Latin exports profitable
To all this can be added the depreciation of Latin American currencies. Brazil's real has been falling for several years dropping in value 23.6% from January 2014 to the early 2015. The pace of the decline however, accelerated in December as its economy faltered and investors withdrew funds.
Interestingly, because Brazil's real and the US dollar are inversely related and the country's crop exports are priced in dollars, Brazil's farmers have not at all been harmed by the drop in corn and soy prices. -In fact, a recent University of Sao Paolo study concluded that the Brazilian real's depreciation has completely compensated farmers for the drop in grain prices. Hence, even though CBOT corn and soy have fallen by a lot, so long as the volume they export remains constant, Brazilian farmers will earn as much this year as they did last year.
Furthermore, what is true for Brazil's corn and soy farmers is even truer for Argentina. -The peso has fallen even more steeply, down over 44% over the past year, especially since it was declared in default of loans in July of last year. Therefore, even with lower feed crop prices, Argentina's corn and soy farmers can earn more off of exports this year than in 2014.
Hence, Latin America's strong motivation to oversell its feed crops is putting downward pressure on corn prices, and may do so even more when the harvest matures within several months.
Furthermore, anxious to balance their own budgets, Latin American governments are encouraging their farmers to go full-speed ahead with feed crop exports. In Argentina, for example, the government has banned banks from providing loans to any farmers who opt to put their soya beans into storage.
This is not surprising, as Argentina's government is heavily dependent on soya bean export taxes to balance its budget -but by increasing the motivation to sell the crop into an already deflating world market, it implies that deflationary forces will get worse when South America's harvest comes in during the early second quarter. 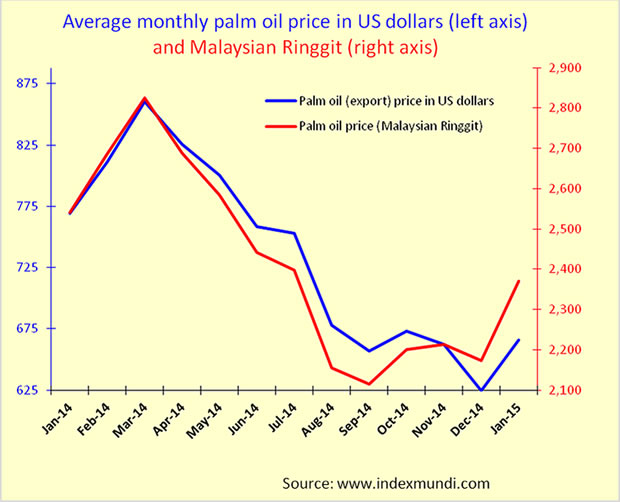 Rain, currency changesmake for deceptive palm impact
On the other side of the world opposite Latin America, the rising US dollar is also having an inflationary, yet paradoxical impact on Southeast Asian oilseeds.
On one hand, with torrential December and early January rains reducing Malaysia's December palm oil output by 20% from a year earlier, this has prompted a sharp rally in the previously slumping oilseed. From its August low, palm oil rallied from barely RM2,100/tonne in early December to RM2,380/tonne at the time of publication.
While a continuation of wet weather could drive palm oil as high as RM2,500/tonne, as is the case in Latin America with soy and corn, the real story is in how currency fluctuations have changed the palm's relative return and cost to growers and exporter's respectively. In October, palm oil had fallen 15% from its March 2014 peak in both dollars and ringgit. Since November however, a sharp price divergence between its domestic cost in ringgit and export price in US dollars has occurred.
Palm's recent rally has coincided with the Malaysian ringgit's decline against the US dollar. As a result, from its low in the first week of December into the first week of January, palm oil rallied in price 13% in Malaysian ringgit -but only increased 6.6% in US dollar terms. Compared to March 2014's rally peak, in the first week of January, palm oil had fallen in price 17.5% in Malaysian ringgit but by 22.6% in US dollar, export price terms.
Now all this has a very paradoxical, deceptive impact on the feed market oilseeds. On one hand, the constraining of Malaysian palm output and higher palm oil price appears to lend the soy-based oilseed/protein meal complex price support.
On the other hand, provided Malaysia's torrential rains end, they will reduce overall annual output by less than 3% -but with the Malaysian ringgit falling in price, palm oil remains very cheap. Hence, even after the losses to exceptionally heavy rains, palm oil faces a very crowded oilseed market -particularly since currency movements are motivating palm growers to over-export as much as they do their Latin American soy and corn growing counterparts. 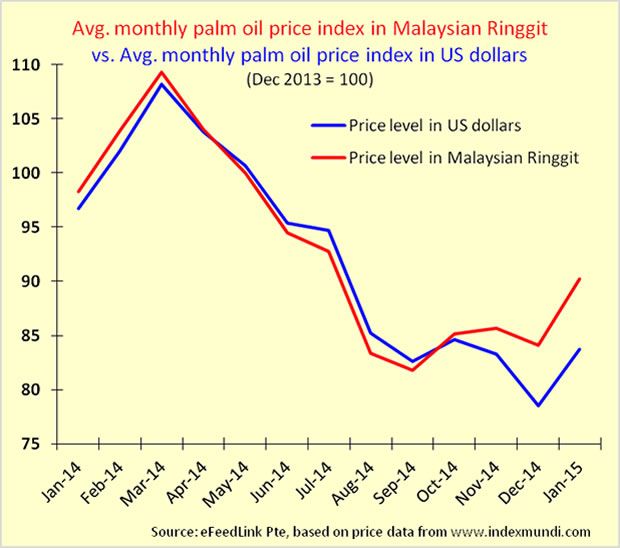 High harvest expectations, wilting demand
The perverse, export-motivating dynamics of currency market swings are given a further deflationary impetus by the disappearance of previous supply-side fears. The US corn harvest is coming in almost as large as early expectations.
In advance of the USDA report, Bloomberg's survey of traders found them expecting the USDA to adjust its estimated corn harvest size to be 364.3 million tonnes, just 1.7 million tonnes less than in the last report. With the corn demand of ethanol makers poised to fall by more than this amount, another 95 to 100 million tonnes of Latin American corn is due to be harvested within a few months. This will be complimented by record or near-record soy harvests in Brazil and Argentina. -And while US farmers have suffered under the weight of lower prices, South American feed crop farmers will be anxious to take advantage of the rising US dollar's creation of windfall export earnings in their national currencies.
At the same time, Alltech reports that in its latest survey findings, world feed production fell last  year, even dropping for a third year in a row in China. All this implies that unless the USDA pulls off a spectacular January surprise, next week's USDA report is set to pull corn and soy back towards the lows they tested in the fourth quarter of 2014.