It's been a good year but a bad decade: After nearly ten years that saw growth in world chicken meat exports trail those of beef and pork, broiler meat exporters ended 2019 feeling more confident than they have been for a very long time.
China brought a five-year bird flu epidemic under control just in time for African Swine Fever (ASF) to first wipe out up to half its pigs and then spread into neighboring Southeast countries. This is jump-starting a massive substitution of poultry in place of pork in Pacific Rim markets holding over two billion of the world's people.
As a result, 2019 saw both world chicken output and exports grow at their fastest rate since 2011 –and at a pace that could be once taken for granted before 2010. World broiler meat production expanded by 4.2%, from 2018's 95.568 million tonnes to a USDA estimated 99.572 million tonnes. Based on strong Asian growth momentum and the need to substitute chicken in place of ASF-constrained pork supplies, the USDA projects 2020 will see a 3.9% increase in world broiler meat output, to a record 103.498 million tonnes.
Exports did even better, rising 6.1%, from 2018's 11.283 million tonnes to 11.976 million in 2019, their most rapid growth since 7.6% in 2011 –after which bird flu and Chinese food safety scandals darkened the longterm outlook. The USDA is projecting growth momentum to power a further 4.4% expansion, making for 2020 world chicken meat exports totaling 12.497 million tonnes.
–But the road to a bright 2020 was both rough and transformative: Based on USDA statistics, 4% annual growth in chicken meat output from 2000 through 2010 subsequently gave way to a succession of bird flu epidemics in China, America, Turkey, India and other nations. This decelerated annual growth in world chicken meat production, to 3.3% in 2010-15, slumping further to below 2% from 2016 through 2018 included.
Exports also suffered. 6% annual export growth from 2000-05 slipped to 5.6% in the years leading to 2010. That was due to a serious bird flu epidemic suffered by Thailand in the mid-2000s, followed by a world recession at the end of the decade. After 2012, a slew of exporters including America, Turkey, Ukraine and Poland suffered bird flu epidemics, as did China. As a result, from 2012 through 2017 inclusive, world broiler meat export growth fell to an unbelievably slow 1.8% annual rate.
The strong, ongoing pick up in poultry meat production and trade is mostly due to two paradoxically ironic factors. First, thanks to ASF, pathogenic viruses devastated world chicken consumption for most of this decade but are now forcing a mass substitution of poultry in place of pork among two billion people living in western Pacific Rim countries.
China will not recover from ASF before 2025 and nearby nations including Vietnam, Philippines, Myanmar, Cambodia and Laos will take a similar number of years. With chicken being substituted in place of pork among younger, more educated Asian demographic segments, the current, ongoing rapid increase in Asian poultry demand is expected to be permanent.
As a result, Rabobank's Q4 Poultry Quarterly notes that "Brazil has made remarkable comeback in global trade, benefitting from the ASF problems in China and Southeast Asia", while noting Thailand and Argentina benefitted even more from the situation.
Second, while "trade wars" dominate media headlines, the world chicken trade is quietly liberalizing in both large ways and in more subtle manners too. The last three months has seen America liberalize its chicken trade with Japan and Mexico, who are the world's first and second-largest chicken importers. Beijing then announced it would allow US poultry into China for the first time in five years and this was followed by a tentative agreement for China to buy up to US$50 billion of agricultural imports over the next two years, a significant proportion of which will be accounted for by poultry.

On the other side of the world, for three years China has steadily approved a rising number of Brazilian and Argentine poultry processing plants for export –and accelerated the pace of approvals after ASF struck its swine sector. The past year also saw China approving Polish and Russian processing plants for exporting chicken meat to China. During these same last six months, Japan also allowed Russian chicken meat into the country.
A few years earlier, Ukraine took advantage of a preferential trade agreement with the EU to become a top broiler meat exporter. Moreover, both Ukrainian and Russian exporters are expected to negotiate access to several Middle Eastern and Asian markets over the coming year.
None of the above-mentioned trade liberalizations is large in itself but their cumulative impact on the world chicken market is large and stimulative. They ensure the world broiler trade will keep expanding by more than the sum of yearly economic growth and ASF-induced substitution of white meat in place of red.
Ongoing broiler meat trade liberalization also means that the chicken trade will continue growing long after the impact of ASF has worn off. Provided no unforeseen disease or economic upset rocks the industry, all the above implies near 4% growth in chicken exports up to the mid-2020s and at least 3%+ annual growth during the decade.
But while good times are ahead, who gets to enjoy them is changing. Underneath a decade of slack broiler trade, an important backstory was underway: From 2005 through 2010, the world broiler market was effectively a duopoly, with America and Brazil accounting for 75% to 79% of annual exports. By 2015, the US and Brazil only supplied 65.5% of poultry exports and their collective share fell to 59% in 2019.
Indeed, the world poultry trade did not decelerate as much as it split into a 'two track' market. For most of this decade, US and Brazilian were flat, barely growing after the early 2010s. In 2019 America exported less chicken than it did in 2013; Brazil no more than it did in 2015. From 2014 through 2019, combined US and Brazilian chicken exports rose 2.7%, up a mere 200,000 tonnes, from 6.9 million to 7.1 million tonnes.
By comparison, the collective export volume of Thailand (+96%), Poland (+184%: both EU and non-EU), Turkey (+36%) and Ukraine (+182%) increased a whopping 84% and 1.35 million tonnes, from 1.61 million in 2014 to 2.96 million tonnes this year.
Of these, Poland's low labor costs and central location have made it a fierce competitor: The EU publishes export statistics as if it were a single country. Even on that basis, Poland is impressive: Exports to non-EU countries have risen from 3,000 tonnes in 2000 to 85,000 tonnes by 2010, 237,000 tonnes in 2015 and an estimated 400,000 tonnes in 2019.
–But if one counts total shipments of Polish chicken meat to both EU and non-European countries, they skyrocketed from 34,000 tonnes in 2000 to approximately 292,000 tonnes in 2010, 666,000 tonnes in 2015, a million tonnes in 2018 and 1.03 million tonnes in 2018 –or 1.311 million tonnes if one includes turkey, duck, and quail meat.
From under 1% of EU chicken meat output in 2000, Poland will account for nearly 20% in 2020. From 7% of output at the turn of the century, exports will account for nearly half of Polish chicken meat production in 2020. 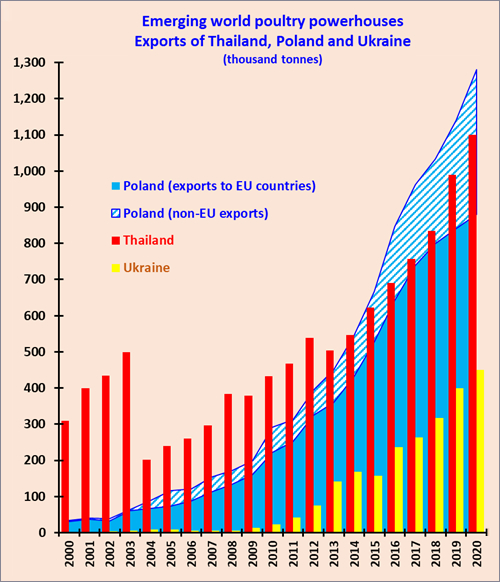 After entering a 2014 trade deal with the European Union, Ukraine enjoyed a similarly meteoric rise: A 778% output rise from 2000 (0.15 million tonnes) through 2019 (1.335 million) tonnes is more than Ukrainian consumers could absorb. Hence, from under 2,000 tonnes in 2000, Ukrainian chicken exports totaled 23,000 tonnes in 2010, 158,000 tonnes in 2015 and a USDA estimated 400,000 tonnes in 2019. Both Polish and Ukrainian chicken have pushed out Brazilian chicken from European supermarkets, as did competing products from Thailand.
A similar success story is that of Turkey, which boosted its exports to Middle Eastern nations such as Iraq and Syria from 24,000 tonnes in 2004 to 348,000 tonnes in 2014, before terrorism and regional civil wars slashed this volume by a third. After the cessation of hostilities two years ago, exports recovered, totaling a record 425,000 tonnes in 2019, though what it really desires is a free trade agreement with both the EU and Saudi Arabia.
Leveraging geographic proximity to large Asian markets and trade agreements with Japan, ASEAN and the EU, Thailand will ship over a million tonnes of chicken in 2020, giving it an intermediate status between tier one and tier two exporters. Having its frozen chicken banned from world markets from 2004 to 2012 forced Thailand to move up the value chain into cooked chicken and frozen, ready-to-eat meals.
Thai integrators combined this value-added processing with branding and marketing strategy, creating a competitive advantage and differentiated product lines that neither larger nor smaller chicken exporters have. Though not based in the EU, Thai broiler meat exports took more European market share from Brazil than Poland and Ukraine combined.
Over the last three years, these four nations have taken market share from America and Brazil in different ways. From America primarily because of the US's inability to temporarily compete in world markets after its 2014 bird flu epidemic. That was followed by the loss of China's market until late this year, when access was restored.
Brazil lost market share primarily due to its sloppiness; be it in food safety violations, via bribery and sanitation scandals, or their non-adherence to Muslim slaughtering procedures. These missteps caused Brazilian chicken market share losses everywhere from the EU (where some of its plants are banned from exporting) to Saudi Arabia, Russia to the United Arab Emirates.
Going forward, ASF is allowing Brazil to substitute Asian market share in place of lost European and Middle Eastern business. For the first time since bird flu struck, America is in a good position from both a trade and supply-side perspective (see accompanying article on US broilers).
Nonetheless, ASF and trade liberalization makes for a rapidly growing but increasingly competitive world poultry market in the years ahead.