UK clean pig slaughterings were almost 5% lower in November than in the same month last year, at 932,000 head.

Latest data from the UK Department for Environment, Food & Rural Affairs, or Defra, showed that this is the largest year-on-year fall recorded so far in 2016, and the largest since mid-2009. It also represents the fifth substantial decline in the last six months.

"This is the legacy of the contraction of the breeding herd driven by low prices a year ago, coupled with some reports of increased disease pressure affecting productivity" AHDB Pork said.

In contrast, sow slaughterings were higher than a year before by 4% at 22,600 head. However, this follows a sharp fall in October which, according to AHDB Pork, shouldn't be interpreted as a significant rise.

The pork division of the UK Agriculture & Horticulture Development Board noted that carcase weights in November returned to the upward trend recorded for most of the year and were around a kilo heavier, on average, than in November 2015, at 82.7 kilogrammes. This partly offset the lower clean pig numbers but pig-meat production was still 3% below last year's level on a like-for-like basis, at 80,400 tonnes. 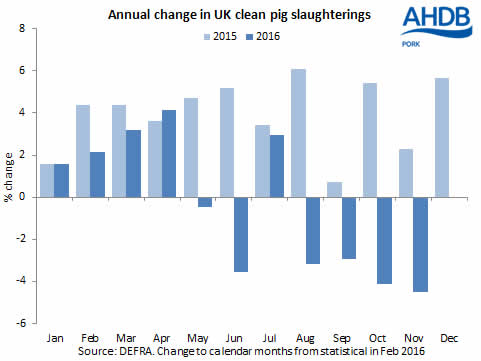