Trouw Nutrition explains how to choose the right TM source

Trouw Nutrition explains how to choose the right TM source

Even small fractions of the animal's diet matter when it comes to influencing health and performance in poultry, swine and ruminant livestock. As essential nutrients in animal feed, trace minerals are a good example of how small considerations can have a big impact on health, performance and producer economics. Raw materials in the basal diet often do not contain enough trace mineral to fulfil the animals requirement, therefore they need to be supplemented.

The role of trace minerals?

Trace minerals including zinc (Zn), copper (Cu), and manganese (Mn) play an important role in the immune system and are essential for animal performance. Zinc helps maintain skin integrity and mucosal membranes (as a cofactor for metallo-enzymes required for cell membrane repair), and promotes activation and proliferation of T-lymphocytes. Copper is a cofactor of cellular metabolic reactions and copper-dependent enzymes. Several of these enzymes play an important role in antioxidant defence of the body, while working within the macrophages to combat certain infectious agents. Manganese is another trace mineral which is a co-factor to several enzymes and helps protect DNA against oxidative damage.

Not all trace mineral sources are made equal

It is important to highlight that not all sources of trace mineral are the same. The source of trace mineral in the diet can help determine how much of the metal will be available to be absorbed into the blood stream, after which it can be used by the animal.

Trace mineral sources differ based on how securely the nutrient is bound and at what concentration. Sulfate trace minerals bind metal ions using a relatively weak ionic bond. These easily broken bonds allow the metal to separate when it contacts moisture, allowing it to react with other elements in feed. Whether moisture is encountered in humid conditions or during processing, it can increase the possibility that the trace mineral is not available to the animal in the gastrointestinal tract (GIT). When trace minerals dissolve outside of the GIT, they aren't available to the animal. Additionally, reactions can occur that interfere with other functions – like reducing fiber and dry matter digestion in the rumen. Minerals that are never absorbed will be excreted into the environment.

Several studies have found that zinc can alleviate or help mitigate gut inflammation and resulting problems during stress management conditions and practices, such as vaccination, shipping and weaning. Additionally, legislation in many parts of the world has meant that therapeutic levels of zincare no longer an option for treating conditions such as diarrhea. A recent study done at Oklahoma State University looked at how feeding different levels and sources of the trace mineral influenced GIT dysbiosis in weaning pigs.4

The two trial diets included a sulfate based or IntelliBond zinc, copper and manganese diet. Pigs also faced an LPS challenge on days 29, 31, 33 and 35. In the hours following the challenge, there was an increase found in the production of TNF inflammatory cytokines. However, three-hours post challenge, swine receiving the IntelliBond diet were better able to regulate the response. 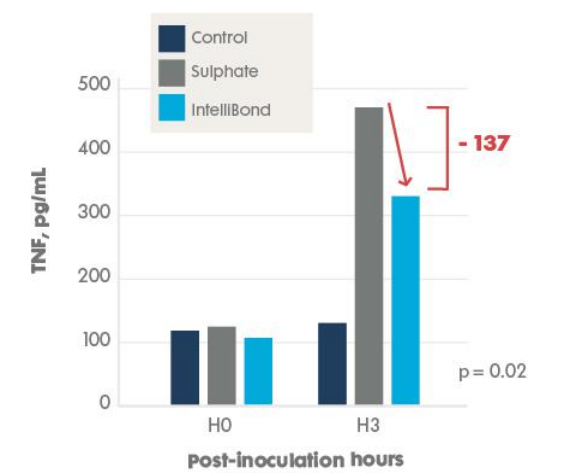 Challenged pigs also were tracked for growth performance (Fig. 2). At the end of the trial, average daily feed intake was higher for pigs on the IntelliBond diet and average daily gain was 30g/day higher compared to pigs receiving sulfate-based diets. 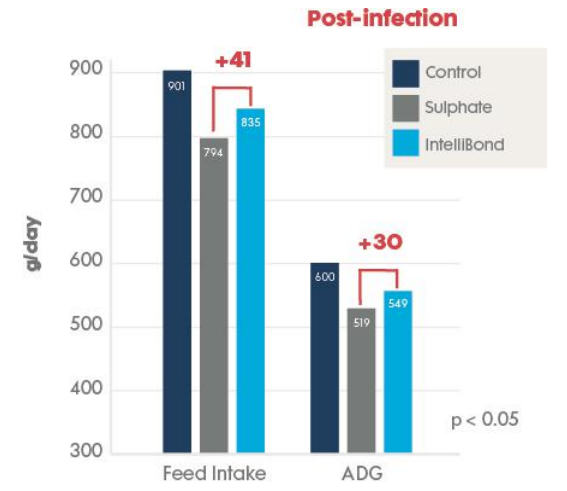 Figure 2. Looking at growth performance metrics, animals on the IntelliBond diet outperformed those on the sulfate diet. Control group animals did not face the disease challenge.

A swine study, done in Iowa in 2018 looked at immune competence in gilts on diets supplemented with either sulfate or IntelliBond trace minerals.5 Diets included 120mg/kg zinc, 15mg/kg copper and 50mg/kg magnesium. Almost 20,000 gilts were orally acclimated to PEDV and researchers tracked how long it took their immune systems to recognize the disease. Gilts receiving the IntelliBond took longer to present PEDV in their saliva and they demonstrated an immune system more efficient at eliminating the viral challenge. 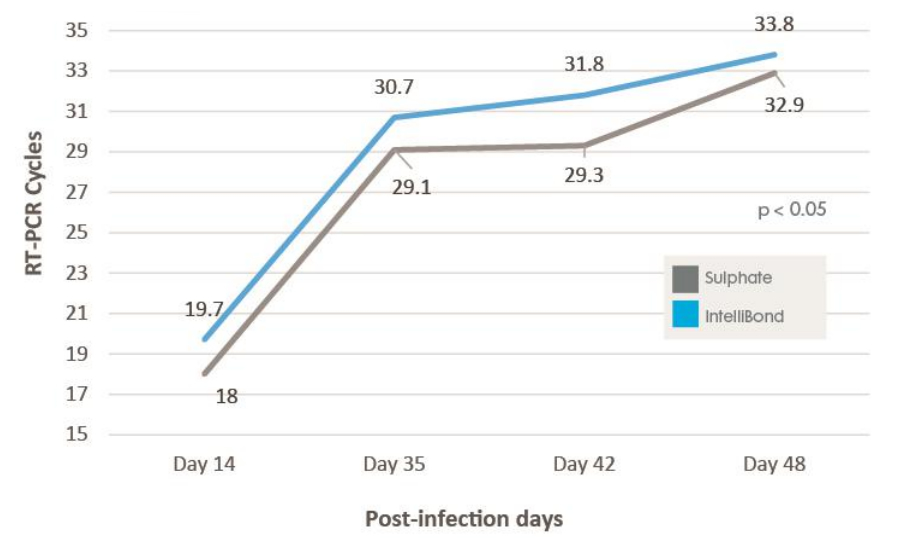 Figure 3. Gilts on an IntelliBond trace mineral diet were better able to fight off an immune challenge from PEDV compared to animals on a sulfate diet.

A study done in 2020 by researchers at North Carolina State University and The Autonomous University of Barcelona looked at antioxidant activity in weaned pigs during a period of environmental stress.6-7 Pigs received diets with 110mg/kg zinc and15mg/kg copper. Pigs on the hydroxy diet generated higher levels of antioxidant enzymes. 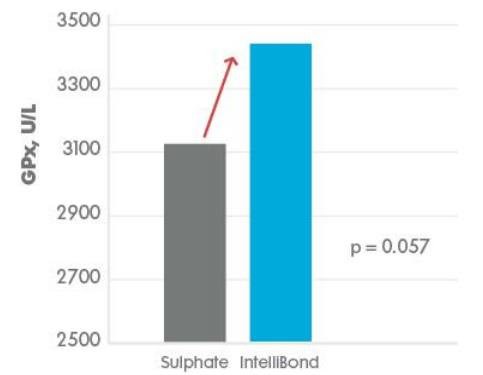 A study done by researchers at the University of Kentucky looked at the difference in response to multiple parities based on the type and amount of copper in the diet.8 Overall, researchers found that animals on the IntelliBond diets were able to produce a greater antioxidant response. 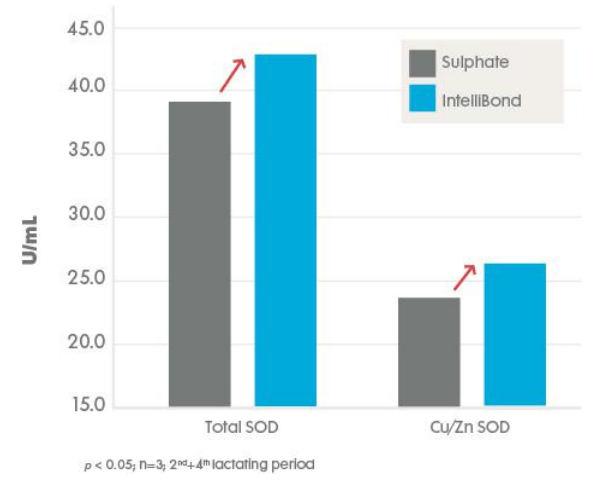 The response to mineral type was not only observed in swine. A study done in 2019 looked at antioxidant activity in broilers.9 In the trial, 1,080 broilers were raised on diets that included 80mg/kg zinc and 15mg/kg copper from either a sulfate or IntelliBond. Broiler birds were tracked for their production of the oxidative stress markers methyl malonic acid and uric acid. Birds on the IntelliBond diet generated lower levels of both acids.

The type of trace mineral source used in feeds can influence the immune response. An less soluble of trace mineral can give better bioavailability, helping ensure that it supports the desired health and performance benefits. Beyond being essential for several functions involved with immune competence, trace minerals also play a role in microbial modulation, gene expression and can contribute to feed palatability. As environmental sustainability remains a priority, an additional benefit of less reactive, more bioavailable trace minerals is lower excretion and waste of metal nutrients into the environment.

Video >
Technical Paper >
The pathway to zinc oxide-free piglet production: Success starts with the gut
Pig producers across the European Union (EU) are now preparing for the upcoming ban on zinc oxide (ZnO), which will come into effect in June 2022. Under this new regulation, the us ...
Water acidifiers maintain piglet gut health, and reduce the need for ZnO
The challenge of managing piglets' enteric health is becoming increasingly complex. Concerns about human health due to antimicrobial resistance and the effects of metals excret ...
Effect of zinc source and level on growth performance and zinc status of weaned piglets
Diarrhea is common in weaned piglets. Feed supplementation with Zn is one strategy for preventing such disturbances. A total ban on the use of therapeutic doses of Zn will be intro ...