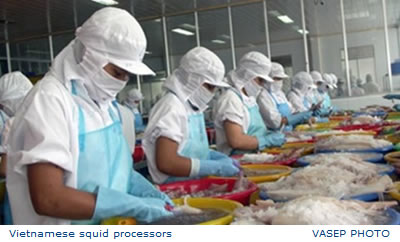 Vietnamese cephalopod exports during the first 10 months decreased 3.5% in value to US$341.9 million.

In October alone, however, exports rose 5.6% to US$43.6 million year-on-year. Exports were on the upward trend in recent months.

South Korea, Japan and the EU remain as the top three importers of Vietnamese cephalopod with good growths recorded in the recent months. While shipments to both Japan and the EU decreased during the first half of the year, the figures for the January-October period showed positive growths in these two markets.

In October, South Korea remained as the largest buyer of Vietnamese cephalopod valued at $18.08 million, up 12.4% over the same period in 2015.

Sales to second-biggest buyer Japan in October reached $9.2 million, and in January-October, about S$85.2 million, up 0.5% from the same 10-month period in 2015. Japan currently accounts for 24.9% of Vietnam's cephalopod exports.

The EU ranks third-largest purchaser with the share of 15.7%.

Exports to South Korea in the first half plummeted by 10%, but in the 10 months through October, they declined by only 3.5% year-on-year to $128.8 million.

Vietnamese cephalopod exports to fourth-largest buyer Asean (Association of Southeast Asian Nations) in October were worth $5.1 million, up 5.8%. The figure in January-October was estimated at $40.5 million, down 11% year-on-year. Asean accounted for 11.8% of Vietnam's total cephalopod exports in the 10 months through October, lower than the 13% proportion in the first half (January-June).

For squid items, shipments of live/fresh/frozen squid in January-October reached $115.5 million, followed by dried/grilled squid with $70.9 million and other processed squid with $12.05 million.

For octopus items, sales of dried/salted/live/fresh/frozen octopus in the first 10 months were worth $113.6 million, followed by processed octopus with $29.8 million, or a total of $143.4 million, accounting for 41.9% of total cephalopod exports.