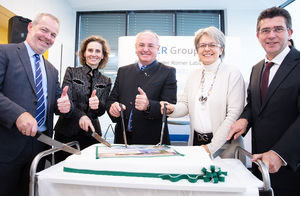 Romer Labs®, a leading provider of diagnostic solutions for the agricultural, food and feed industries, recently celebrated the opening of a new center for R&D and production in Tulln, Austria.

Representatives from business, research and public service gathered to participate in the ribbon-cutting ceremony.

"With the opening of a center for R&D and production in Tulln, Romer Labs® further cements its commitment to innovation and precision in diagnostic solutions for the food and feed industries," the company said in a press statement.

Since its founding in Missouri, US, in 1982, Romer Labs® has grown to serve producers of food and feed around the world. Its 1999 acquisition by the ERBER Group laid the groundwork for an ambitious expansion course that has seen the company become a world leader in both rapid test kits and analytical services with four worldwide service labs, one of them now housed in the new facility in Tulln.

"We have decided to invest in Austria, sustainably and for the future, as ERBER Group," said  Erich Erber, founder and chairman of the ERBER Group's supervisory board, at the opening ceremony.

"This attests to a growth trajectory that is clearly international and, at the same time, has an Austrian focus - the new Romer Labs® facility in Tulln is just one of many steps we will be taking over the next few years, and it truly demonstrates that we have ambitious goals on the market. It is a big step toward a future that continues to be successful for the entire ERBER Group."

"Sales at Romer Labs® have doubled in fewer than four years. Over the next five years, Romer Labs® will strive to double sales again and will make a valuable contribution to the entire group's organic growth," Jan Vanbrabant, chairman of the group's executive board, commented.

"Now that we have research and production under the same roof, we can increase our agility considerably," Eva Wanzenböck, managing director of Romer Labs®, remarked. "This will enable us not only to respond faster to the demands of the marketplace but also to anticipate them."

Dignitaries at the ceremony included the Provincial Minister for Economy, Tourism and Sport for Lower Austria Petra Bohuslav, Mayor of Tulln Peter Eisenschenk, vice-president of the University of Life Sciences and Natural Resources (BOKU) Sabine Baumgartner, and Professor Rudolf Krska, head of the Department of Agrobiotechnology at BOKU.