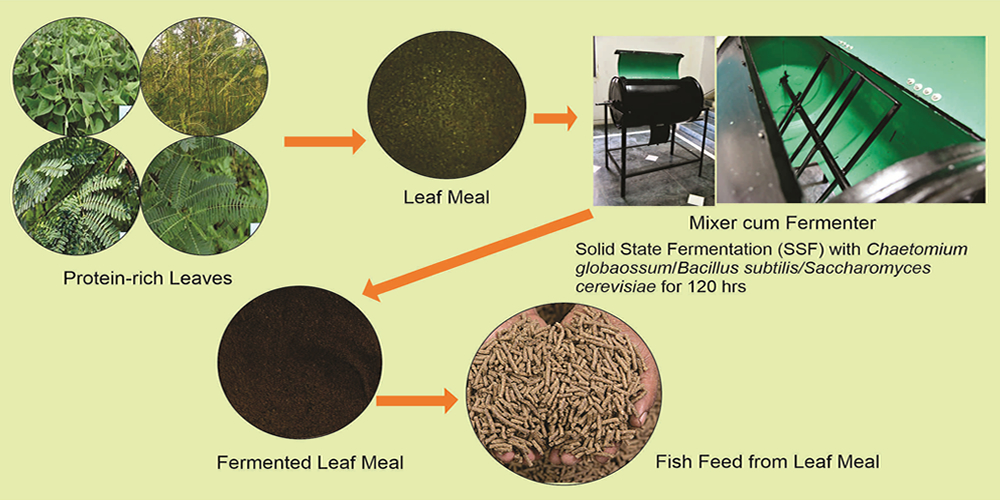 The intensification of aquaculture in India invariably requires rapid growth and development in aquafeed production.

As a practice, major feed ingredients used by Indian farmers for carp production include de-oiled rice bran, groundnut or mustered oil cakes, and their use depends on availability and price.

De-oiled rice bran is the by-product of rice milling, and contains 14-17% crude protein. The utilisation of bran has increased manifold, which resulted in increased prices in the market.

Additionally, increasing fish production to match the requirement of the ever-increasing human population requires an additional amount of de-oiled rice bran, which could be insufficient in future when considering the current state of production.

An alternative, non-conventional ingredient that can replace de-oiled rice bran is leafmeal, which is less expensive and readily available.

The following are interesting facts about leafmeal:

- Leaves, which have a higher protein content (20-28% CP), are used for the preparation of leafmeal. These can be obtained from sweet potato, Subabul, Sesbania, Mung, green pea and soybean leaves;

- The digestibility and nutrient content of leafmeal are enhanced by solid-state fermentation (SSF). For sweet potato, SSF for leafmeal is carried out with fungus, Chaetomium globosum for 120 hours. Other microbes, like Saccharomyces cerevisiae (commonly known as baker's yeast) and Lactobacillus subtilis, can also be used depending on the type of leaf;

- For the SSF of leafmeal, a  mixer/fermenter is fabricated, which can effectively process 20kg of leafmeal at one time;

- Fermented leafmeal is used to prepare carp feed with enhanced nutrients content and can replace de-oiled rice bran completely without compromising the growth and health of fish;

There is also no direct cost involved in leafmeal preparation, with labour costs a recurring expenditure. A fermenter/mixer can be fabricated locally at a very minimum cost.