Increased occurrence of gut diseases with the removal of AGP in feeds, however, enlightens pig producers and animal scientists the importance of concepts of intestinal health [13,14], intestinal microbiota, and alternative feed additives. Importance of these topics is well shown by increased research activities. Simply searching the PubMed with keywords including intestinal health and microbiota in pigs provided over 1,900 peer-reviewed papers since 1960. However, 90% of all papers are published since 2010 indicating increased challenges with intestinal health and interests in intestinal microbiota of pigs especially during the last 10 years (Figure 1). Even after consideration of a general increase of research activities in swine nutrition and production, based on the number of peer-reviewed papers shown in the PubMed, research on intestinal health and microbiota is near 40% of general growth performance research in 2020, whereas it took less than 5% prior to 2007 or only less than 1% prior to 1997. 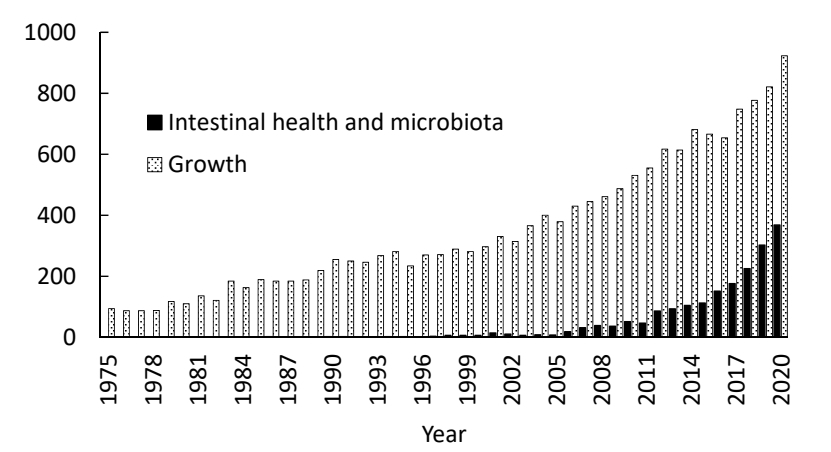 The gastrointestinal tract is the largest and longest internal organ of pigs [15]. The intestine is separated into the small and large intestine. The small intestine is further divided to the duodenum, jejunum, and ileum. In pigs, the jejunum takes almost 80% of the small intestine (Figure 2) and where feeds are mostly digested to nutrients and then absorbed [13]. In the modern pig production, nursing piglets are weaned mostly at 3 to 4 weeks of age when they are too young considering that natural weaning occurs at around 8 to 10 weeks of age [16]. The intestine of early weaned pigs is premature with mucosal dysfunction [17,18]. This is the critical age for newly weaned pigs greatly affected by dietary factor. Conventional feeds given to newly weaned pigs include grains, legume seed meals, and animal byproducts. These feeds are essential sources of nutrients but also provide a notable amount of allergenic, antigenic, toxic, and pathogenic compounds to the intestine of newly weaned pigs [19-21]. Such stressors from the feeds often cause immune responses at the mucosal barrier of the jejunum followed by inflammatory responses and oxidative stress responses [22-26]. The jejunum is the major site of facing these challenges [15,18, 20,26] as well as for the feed digestion and nutrient absorption. Excessive inflammation and oxidative stress in the jejunum would cause destruction of villi and leaky gut resulting in reduced growth [24,27,28]. 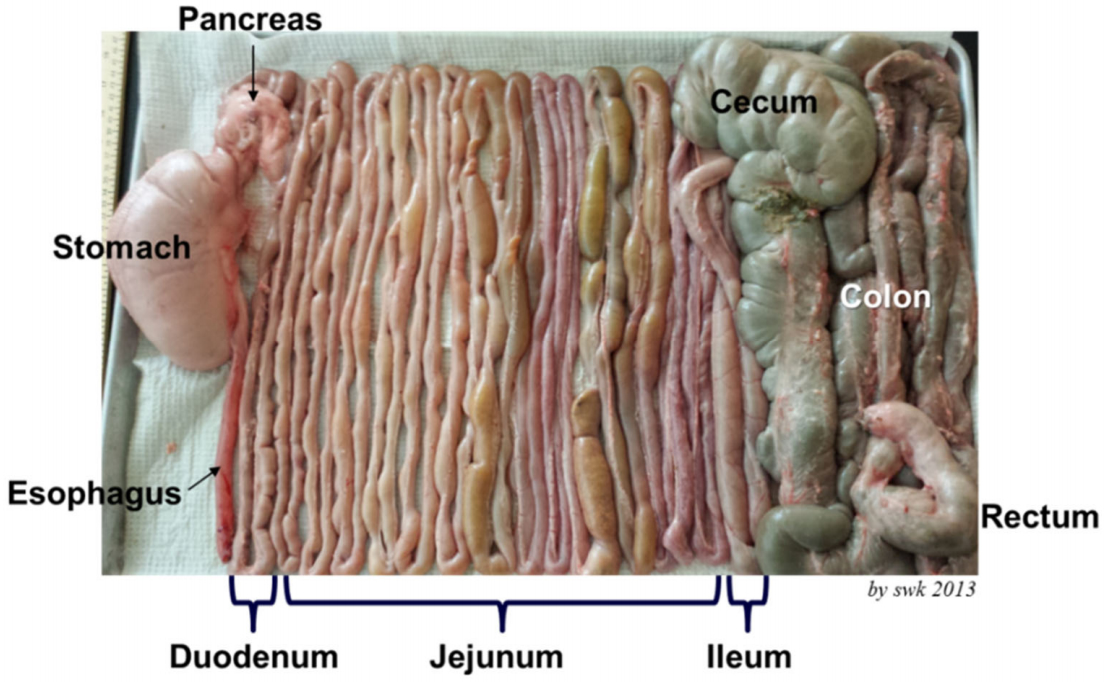 Figure 2. A photo of gastrointestinal tract of a pig at 5 weeks of age. The photo is taken by Sung Woo Kim in 2013 and also used in Eisemann and Kim [15].

For the successful nutritional management of newly weaned pigs, therefore, prevention of unnecessary elevation of inflammation and oxidative stress in the jejunum would be the right direction. There can be several biological indicators to determine inflammatory status and oxidative stress status in the jejunum of pigs. Cytokines are small proteins secreted from cells for the communication among cells. Some cytokines (including tumor necrosis factor-α [TNF-α], interleukin-1β [IL-1β], IL-6, IL-8, and interferon-γ) functions as immunoregulatory molecules to activate immune cells causing inflammation and thus they are called pro-inflammatory cytokines [29], whereas cytokines (including IL-4, IL-10, and IL-13) reducing inflammatory responses are called anti-inflammatory cytokines [30]. Pro-inflammatory cytokines can be released from intestinal immune cells as well as mucosal epithelial cells [31,32] by increased production of free radicals causing oxidative stress [33]. Excessive free radicals can damage cellular components including cell membranes and intracellular enzymes. Malondialdehydes and carbonyls are products of oxidative damages of lipids and protein, respectively, which are well accepted biological markers for oxidative stress [34-36].

A collective review of over 10 recent publications from our laboratory indicates that typical lean type nursery pigs with normal growth maintain 0.2 to 2.0 pg TNF-α and 0.2 to 0.8 µmol malondialdehydes per mg protein in the jejunal mucosa as selected examples. Increases of TNF-α and malondialdehydes showed negative correlation with growth of nursery pigs (Unpublished data). Nursery pigs with TNF-α greater than 0.6 pg and malondialdehydes greater than 0.5 μmol per mg protein in the jejunal mucosa showed reduced weight gain. This example shows that selected inflammatory and oxidative stress measurements of the jejunal mucosa could be effective biomarkers for the intestinal health and thus potential growth of nursery pigs. Then nutritional strategies to maintain or improve intestinal health of pigs upon weaning could target altering some of these biomarkers. Recent publications, evaluating the effectiveness of these nutritional strategies, extensively target to affect the status in the jejunum by reducing the excessive release of pro-inflammatory cytokines and oxidative stress products. This alternation would maintain healthy villus structure with effective barrier functions which will in turn influence potential growth of nursery pigs.

Animal nutritionists have evaluated and tested numerous alternative bioactive compounds, extracts, microorganisms, and feed additives to replace the use of AGP. The major target of these alternatives has been affecting and improving intestinal health of pigs with some promising outcomes but still without complete answers to replace AGP [9,54,55].

Potential and partial success has been obtained from the use of prebiotics [56,57], probiotics or direct-fed microbials [53,58], postbiotics [59-61], phytobiotics [62-64], non-starch polysaccharide degrading enzymes (NSPases) [24, 65-67], functional amino acids [68-70], acidifiers or organic acids [71,72], and other bioactive compounds [38,73,74]. Prebiotics traditionally used in feeds include fructo-oligosaccharides and manno-oligosaccharides, but also extend to xylo-oligosaccharides and milk oligosaccharides [57,75]. Recent research uses NSPases such as xylanase and mannanse as feed supplements in feeds to provide xylo-oligosaccharides and manno-oligosaccharides as sources of prebiotics in the intestine of pigs [25]. Probiotics has long been used in animal production. Effective probiotics are extensively lactogenic bacteria as they can reduce pH of the intestinal lumen and can potentially colonize or associate to the intestinal mucosa, together providing undesirable environment to pathogenic bacteria in the intestine. Recent research indicates that effective probiotic bacteria should associate to jejunal mucosa affecting immune cells in the small intestine [25,76]. Typical probiotics used in pig production include, but not limited to, Bacillus licheniformis, Bacillus subtilis, Bifidobacterium thermophilum, Bifidobacterium bifidum, Lactobacillus acidophilus, Lactobacillus plantarum, Lactobacillus reuteri, Saccharomyces cerevisiae, and Enterococcus fascium. Each strain of probiotics has a preferred environment based on availability of oxygen in the intestine of pigs. Effectiveness of probiotics with multiple strains should be compared with probiotics with a single strain. Postbiotics include bioactive compounds produced by probiotics during a fermentation process. This is a relatively new term but yeast culture [59,60] and yeast cell wall extracts [27,61] are examples of traditional postbiotics used in pig production.

Phytobiotics includes herbal extracts and essential oils that typically possess antioxidant, antibacterial, and antiviral properties [62-64,77]. Bioactive compounds in phytobiotics typically phenolic compounds with unique aroma [62]. Determination of an effective dose level would be an important item for the use of phytobiotics to prevent any potential negative impacts on feed intake. Feed enzymes degrading non-starch polysaccharides have been used in pig production mainly to provide additional nutrients by lessening cage effects of polysaccharides which entrap nutrients and feed particles in the small intestine of pigs [65-67]. However, recent research shows additional benefits of NSPases by converting NSP to potential prebiotics in the small intestine of pigs [24,25]. Some selected supplemental amino acids, such as arginine, glutamine, methionine, possess unique functions in the animal body. Methionine reduces oxidative stress in the intestinal epithelium [68], whereas glutamine prevents jejunal atrophy [78]. Arginine is also shown to be effective by its role in angiogenesis and vasodilation in the small intestine [79,80].

A combinational use of multiple alternatives providing potential synergic benefits, so called synbiotics, is leading a recent trend of pig nutrition research [25,81-83].

Video >
Technical Paper >
The pathway to zinc oxide-free piglet production: Success starts with the gut
Pig producers across the European Union (EU) are now preparing for the upcoming ban on zinc oxide (ZnO), which will come into effect in June 2022. Under this new regulation, the us ...
Water acidifiers maintain piglet gut health, and reduce the need for ZnO
The challenge of managing piglets' enteric health is becoming increasingly complex. Concerns about human health due to antimicrobial resistance and the effects of metals excret ...
Effect of zinc source and level on growth performance and zinc status of weaned piglets
Diarrhea is common in weaned piglets. Feed supplementation with Zn is one strategy for preventing such disturbances. A total ban on the use of therapeutic doses of Zn will be intro ...