After hyperinflating 168% from approximately RMB19/kg (US$2.79/kg) in August 2018 (when ASF broke out) to a record RMB52/kg (US$7.40/kg) in late October, November saw hog carcass prices in Beijing's Xinfadi market fall sharply for the first time since the epidemic started.
Partly due to a cyclical post-Autumn holiday demand slump, partly due to surging imports, Xinfadi hog carcasses fell 23%, closing November near RMB40/kg (US$5.69/kg). –Even so, prices entered December 122% more expensive than in the same month of 2018.
An additional factor egging on this aggressive deflation was a November 4th announcement that the government would inspect cold storage facilities nationwide and destroy any meat found containing African Swine Fever (ASF) virus. They subsequently panicked and sold their frozen pork before inspectors could see it. This made the price fall worse.
The deflation also coincided with the first solidly positive supply-side news of the year: eFeedLink's Livestock Tracker reported that after falling from 492 million head in August 2018 to a bottom of 208.8 million head this September, Chinese hog inventories rebounded 8.9% in two months, closing at 227.4 million head in November. Except for south and southwest China, swine herds in all other regions have either stabilized or started to increase.
Always a bellwether for inventory trends, October saw China's sow population rise 0.6% --its first such increase since April 2018, before ASF broke out.  All this agrees with Yang Zhenhai, China's agriculture ministry animal husbandry bureau. He recently stated that "Overall, breeding sow inventories are expanding and we see a bottoming out in hog inventories." 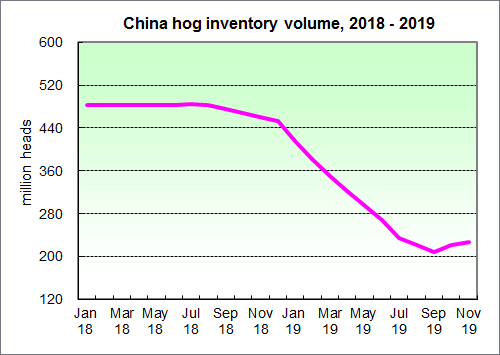 Moreover, among the 13,000 large integrated farms which grow over 5,000 hogs and own nearly 20% of China's hogs, the news was much brighter: Reuters reported that their October inventories of live hogs increased by 0.5% and breeder sows by 4.7% respectively over September levels.
That implies that the nascent inventory recovery is being led by the largest, most integrated and capital intensive farms in China's vast swine sector. With these technologically advanced swine growers can be expected to account for a significantly larger proportion of future pork output. This on its own will significantly raise Chinese swine sector productivity in years to come.
But the "good news" about the recovery in sow numbers must be viewed with a degree of cold skepticism: In late November ministry of agriculture officials instructed local Chinese news media press conference attendees "to report good news to restore the confidence of hog farmers."
But even if the recovery in hog numbers is sustainable, for now, prices will be demand-driven. They will not respond to supply growth anytime before the second quarter of 2020. Only then will a sufficient quantity of new hogs come to market to influence price movements.
Beijing and Shanghai's live hog markets set the price trend for China as a whole: As of early December and with Chinese New Year's high yearly consumption peak less than two months away, both of these exchanges were auctioning 30% to 40% fewer live hogs than a year earlier. That is why after bottoming out near RMB40/kg at the end of November, hog carcass prices rebounded to RMB42-43/kg in the first week of December.
Pork supplies are further constrained by hog carcass rejection, which now occurs with over 10% of slaughtered swine. The rejection rate skyrocketed after farmers attempted to maximize returns by boosting finishing hog weights by a whopping 15kg over the past few months. According to traders in Beijing's Xinfadi market, most of the additional weight gain was unsellable excess fat rather than actual pork muscle, making fat rejected hog carcasses impossible to process at a net profit.
With domestic supplies at least 30% below normal, imports of pork and other meats are unable to make up for lost output. Yearly peak pre-Chinese New Year demand will strongly stimulate consumption throughout December and the first three weeks of January. This means that in theory, China's hog and pork prices have nowhere to go but up for the next seven weeks
In practice, China's policymakers traditionally suppress pork prices during the two-month run-up to Lunar New Year by selling pork from government reserves. 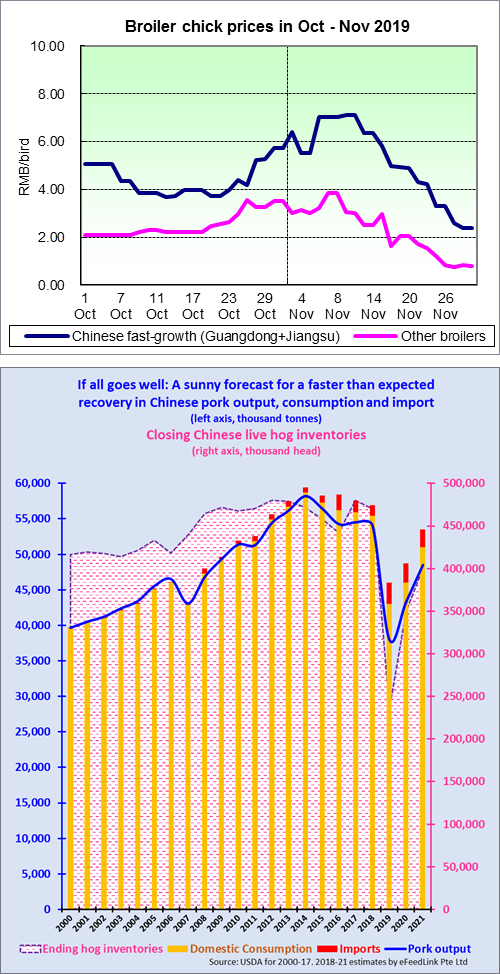 One one hand, the ASF outbreak forced them resort to more aggressive deflationary measures. According to industry sources government officials have discreetly told companies and slaughterhouses to step up their slaughter rates, stop hoarding pork, release their frozen pork inventories into the market, and refrain from raising prices at the end of the year.
On the other hand, to ensure a rapid pork output recovery, government officials have to pursue a delicate balancing act:
November's swine price deflation made AA broiler prices crash 17.2%, from 13.03/kg (US$1.85/kg) at the start of November to RMB10.79/kg (US$1.53/kg) at the month's end. AA broiler profit margins plunged 94.5%, from RMB2.57/kg (U$0.37/kg) in October to a razor-thin RMB0.15/kg (US$0.02/kg) in November. According to eFeedLink's Livestock Tracker, any further drop in swine prices could result in AA broiler net farming losses of up to -RMB0.30/kg (-US$0.04/kg).
That would probably stop the growth in chicken meat production and could lead to a new round of meat price inflation in 2020. Policymakers will probably supply the market with enough reserve pork to stabilize its price around RMB41/kg to RMB45/kg during the run-up to Chinese New Year.
–That is up to 10% above the swine market's November bottom and would ensure that poultry sector profits are sufficiently high to motivate its rapid expansion in 2020.
Even after the recent price drop, swine farming remains strongly profitable such that piglet replenishment will continue. Over the short term, however, December and January will see a sharp rise in the number of hogs released, as farmers make a large percentage of yearly revenues in the two months prior to Chinese New Year.
That may cause the rapid growth in hog inventories to stall in December and for most of Q1 2020. Assuming no further serious ASF outbreaks occur, hog inventories will shift into an aggressive growth phase in Q2 2020. That will induce an aggressive rebound in pork output from H2 2020 onwards, as the rising hog population starts coming to market.
Going forward animal husbandry and veterinary bureau director Yang Zhenhai has an ambitious official target: While many analysts did not expect production to fully recover before 2024, Yang wants 2020 hog inventories to close at 80% of "normal levels." –Based on the USDA's average 2013 to 2017 average closing inventory level of 455.8 million hogs, Yang hopes hog inventories will recover a whopping 60% in 13 months, to total 365 million head by December 2020 –that is far above the USDA's current estimate, which sees Chinese hog inventories ending 2020 at 275 million head.
Yang's optimistic projections would see pork production rebound back into the 45 to 49 million tonne range by 2021, far ahead of the 39 to 44 million tonnes most analysts are forecasting for that year.
On one hand, Yang is intelligent enough to expect more setbacks and probably knows his target 2021 inventory target is not achievable. On the other hand, if the reported rebound in hog and sow inventories is statistically accurate and can be sustained, pork production of up to 5 million tonnes above current industry estimates could occur beginning in 2020, with full recovery occurring up to two years ahead of what is being currently assumed.
That, in turn, could upset the USDA's China import forecasts of 3.5 million tonnes for 2020. It will still remain the world's leading swine meat importer, but see volumes level out in the 2.5 to 3.0 million tonnes range in the years up to 2025.
Alongside a certain measure of luck, all this requires that China's domestic pork and hog prices do not fall far below the lows seen this past November. Until a cure for ASF is found, Chinese pork production can only expand if high disease risk is offset by equally exceptional farming returns. Chinese policymakers probably appreciate this enough to limit their interference with free-market hog prices.