Poultry mortality and performance losses due to necrotic enteritis (NE) were mitigated when feeds were supplemented with HiZox®, a potentiated source of zinc oxide from Animine, the company said.

The findings were announced during the Intestinal Health Scientific Interest Group symposium (IHSIG) in Bangkok, Thailand, in October. Necrotic enteritis in the poultry industry was one of the subjects presented at the event.

Nutrition and more particularly, mineral nutrition, are critical factors to dealing  with necrotic enteritis, according to Animine. Hence, two findings about the effects of dietary zinc in broilers affected by Clostridium perfringens were presented. One of these cases is a "severe challenge" which was studied by Southern Poultry Research Inc. (SPR); the other was described as a "mild challenge" which was carried out in Thailand. 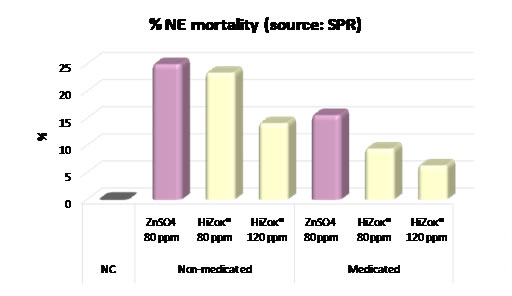