Research findings were presented in the company's global webinar series – "The gut health benefit of copper in broiler production."  Following are excerpts of the research.

When feeding trace minerals, two factors are key
When adding trace minerals like supplemental copper to the animal's diet, two different levels should be considered: nutritional levels and high levels. The required nutritional amount of trace mineral is needed by the animal for optimal performance and is absorbed across the intestinal wall to meet physiological demands including:

* Tissue integrity – including in the skin, bone and gut and respiratory tract lining

* Nervous system functioning and the production of myelin

For copper, higher level feeding means adding 125 to 250ppm of copper to the diet for broilers, layers or turkeys. This additional level in copper has been linked to improvements in:

When adding trace minerals, including copper, to animal feed, one consideration is how a mineral interacts with other elements in the diet. A particular concern is that mineral inclusion could interfere with the retention of several vitamins including A, E, K and thiamine.

In a study completed in 2002 and shared at the Annual Florida Ruminant Nutrition Symposium, vitamin retention was examined as levels of four different kinds of trace mineral were added to the diets – chelated minerals, oxide-based minerals, sulphate-based minerals or free metal minerals.

The examination found that the longer feeds were stored with trace minerals, the more reduction in vitamin levels occurred. However, the reduction in vitamin level was not consistent across the source of mineral type. Higher levels of vitamin degradation occurred when free metal or sulphate-based minerals were added to the diet. A far greater amount of the vitamins remained in the diets when oxide-based or chelated minerals were used (Figure 1).

In a study looking at vitamin E levels in feed when no trace mineral, 200ppm copper sulphate or 200ppm Selko® IntelliBond® hydroxy copper were added, researchers found that vitamin levels again fell over time.  However, feeds with no added copper and IntelliBond copper saw a similar slow reduction in vitamin E levels - about 45mg/lg of the initial 60mg/kg of the vitamin remained after 41 days. Feed supplemented with copper sulphate saw a 24% decline in vitamin E levels in 10 days and a 69% drop in 41 days – leaving about 14mg/kg of vitamin E in the diet (Figure 2). 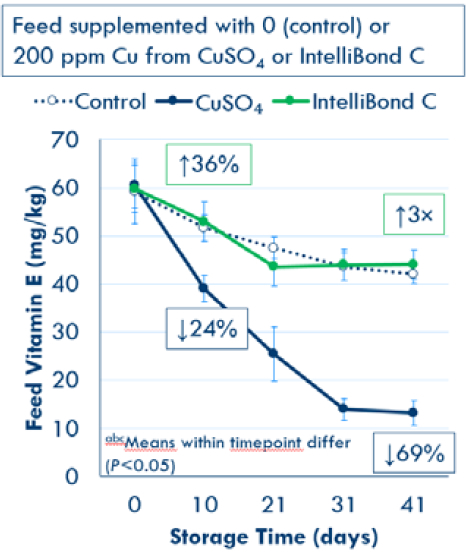 Similarly, in a feeding trial, chicks received diets with either 100, 150 or 200ppm copper sulfate or hydroxy copper. Their corn-soybean mash diets also included 64 IU/kg vitamin E in premix and 16 IU/kg in feed. The amount of vitamin E found in chicks' blood plasma was 11% higher for birds getting the hydroxy copper supplement (Figure 3). 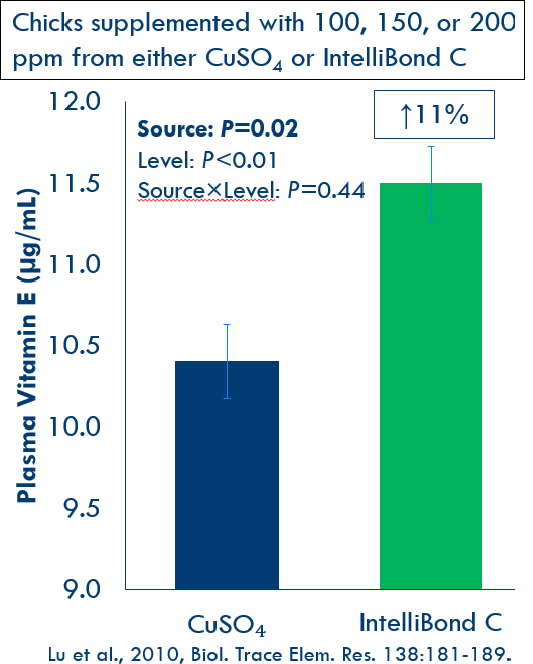 Another interaction trial completed in 2006, saw researchers exploring the possible relationship between copper inclusion in a diet and phytase efficacy. The group traced the release of phosphorus when increasing levels of copper citrate, copper chloride, copper lysine, copper sulphate or IntelliBond copper were added to phytase. As higher levels of copper were added the efficacy of phytase fell – but how much inhibition was experienced changed based on the kind of copper included. Copper citrate, copper chloride and copper sulphate had the most influence on phytase. Copper lysine demonstrated less of an affect and – other than at the 500ppm level – IntelliBond copper had the least influence on phytase efficacy allowing more phosphorus to be available.

Testing high levels of copper to defend against pathogenic bacteria

Beyond adding copper to feeds to supply needed dietary nutrients, there has been interest in adding higher levels of copper to provide bacteriostatic and bactericidal properties. Several research studies have demonstrated that the presence of copper can limit colony growth for multiple species of pathogenic bacteria including clostridium and salmonella along with reducing coliform populations, which can improve bird growth and feed efficiency.

In an in vitro study looking at the interaction between copper and pathogens including S. enteritidis, E. coli, C. perfringens and S. gallinarum, researchers found that increasing the presence of copper to 200ppm significantly reduced the growth of some bacterial colonies. By the time 400ppm copper were present, only C. perfringens and S. gallinarum showed any development and all bacteria growth was inhibited when 600ppm copper were added to the test dishes.

Although 600ppm may appear a large amount to include in a diet, the actual amount that needs to be fed is much smaller. As livestock digest diets with higher levels of copper, the copper present becomes more concentrated as it moves along the digestive tract. The reduction of other elements means that a diet that starts with 150ppm copper reaches the lower intestinal tract with 375ppm. 600ppm copper in the lower gastrointestinal tract started as a diet with 240ppm of added copper.

In addition to limiting bacteria growth, high copper diets may prevent microbial degradation of diets and increase the amount of nutrients available to the bird. Reducing microflora also can mean less disease challenge for the bird.

In a pair of feeding trials, looking at the indirect benefits from using of high levels dietary IntelliBond copper, the practice was found to support protein digestibility and to spare dietary vitamin E.

The effects of high levels of dietary copper also can be influenced by the type of trace mineral used. When planning to add high levels of copper to a broiler diet, there may be interest in using high levels of copper sulphate given its very low price point. However, because sulphate-based trace minerals are reactive with other dietary ingredients, its use can have a higher cost than expected. Copper sulphate has an antagonistic relationship with some dietary nutrients, increases the pace of oxidation for some fats, limits phytate functioning and reduces the longevity and availability of vitamins.

A study examining the influence of copper on the bacteria in broilers, looked at the amount of E. coli and C. perfringens found in the upper ileum of broilers getting diets with 150ppm copper from either a copper sulphate or hydroxy-copper source for 14 days. Bacteria were inoculated with digesta from birds on the diets and a control diet, which included only nutritional levels of copper at 6.9ppm. 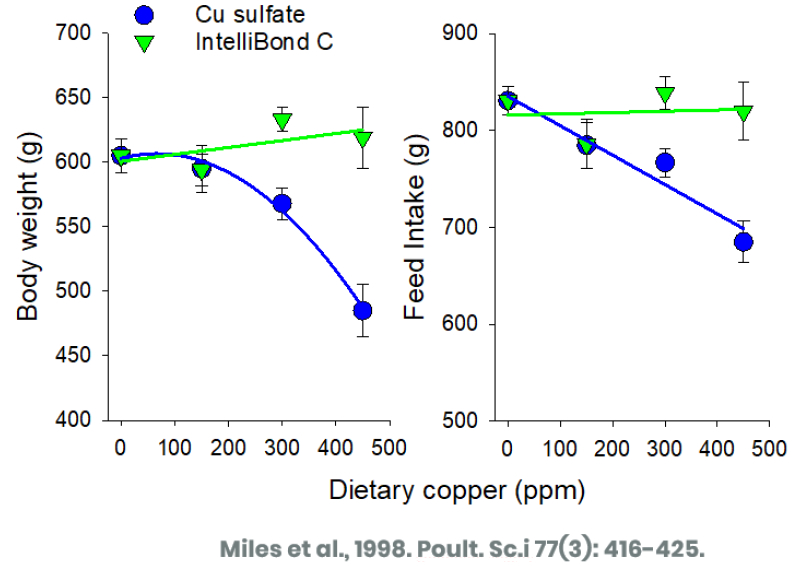 In a follow-up trial, birds receiving hydroxy copper saw feed intake and average daily gain increase until about 250ppm copper was added to the diet, then began to decline. Birds on a diet with copper sulphate presented a decline in feed intake when about 100ppm copper were included in the diet and a decline in average weight gain that went lower than that shown by birds receiving a hydroxy copper-supplemented diet.

In a series of trials completed from 2010 through 2017 birds were provided with 125ppm copper from either copper sulphate or hydroxy copper. Overall, birds demonstrated improved feed conversion with results ranging from 0.7 points to 7.3 points of gain. Body weight also predominately was improved when hydroxy copper was used in the diet – except for a study done in 2017 with male birds. On average, body weight improved by 0.084lb and feed conversion saw a 4.7-point boost.

A study completed in 2014 examined the use of graded levels of IntelliBond copper for periods of broiler production used with or without an antibiotic growth promoter (BMD). Diets included no additional copper; 125ppm copper through day 28, through day 42 or day 49; or a graded use with 200ppm days 0-14, 150ppm days 15-26 and 125ppm days 29-49.

Also, in the trial, birds had phytase and xylanase added to diets and birds were raised in built-up litter and given a coccidiosis vaccine at hatching.

Overall, the results indicated that birds gained an average of 0.221lb more on higher levels of hydroxy copper rather than lower levels or copper sulphate-supplemented diets. Those birds also reduced feed conversion by 2.6 points, lowered lesion scores, and saw a decline in mortality rate of 3.5%.The results also demonstrate that hydroxy copper provides an effective and antibiotic-free tool to producers seeking to combat necrotic enteritis.

Additionally, an internal trial compared the feed conversion shown by 2,220 male broiler chicks facing a heat stress challenge based on the type of copper additive birds received. Diets included graded levels of hydroxy copper – 200ppm days 1-14, 150ppm days 15-28 and 125ppm days 29-42 – or graded levels of copper sulphate combined with 80ppm of a corresponding type of zinc and manganese. Researchers also examined the use of nutritional – 15ppm – levels of hydroxy copper or copper sulphate, again combined with 80ppm of the corresponding – hydroxy- or sulphate-based – zinc and manganese.

They found that using a grade level of hydroxy-based copper provided a better feed conversion ratio than using sulphate-based copper.

Overall, research finds adding hydroxy copper to the diets of broiler chicken supports production – even during challenges like heat stress or disease presence. It can be used with antibiotic growth promoters but provides better performance at a lower cost than use of antibiotic growth promoters alone. It also consistently outperforms copper sulphate and provides a good economic return.

Video >
Technical Paper >
Early nutrition programming (in ovo and post-hatch feeding) as a strategy to modulate gut health of poultry
Healthy gastrointestinal tract (GIT) is crucial for optimum performance, better feed efficiency, and overall health of poultry. In the past, antibiotic growth promoters (AGP) were ...
What is the impact of diet on nutritional diarrhoea associated with gut microbiota in weaning piglets: A system review
Weaning is sudden and stressful and one of the most challenging periods in a pig's life. Newly weaned pigs are usually stressed by nutritional, psychological, environmental, ph ...
Feeding of brewers' yeast derivatives in calves enables excellent start in life
Due to their immature immune system calves are very susceptible to intestinal and respiratory diseases in the first weeks of life. Challenges, e.g. adverse climate conditions or so ...