November 28, 2019
The constantly re-invented bird: Genetics, antibiotics and a century of non-stop poultry innovation
Even after a century of torrid growth, costs keep falling keeps rising, consumption keeps rising and the end-product continues to evolve.
By Eric J. Brooks
An eFeedlink Hot Topic 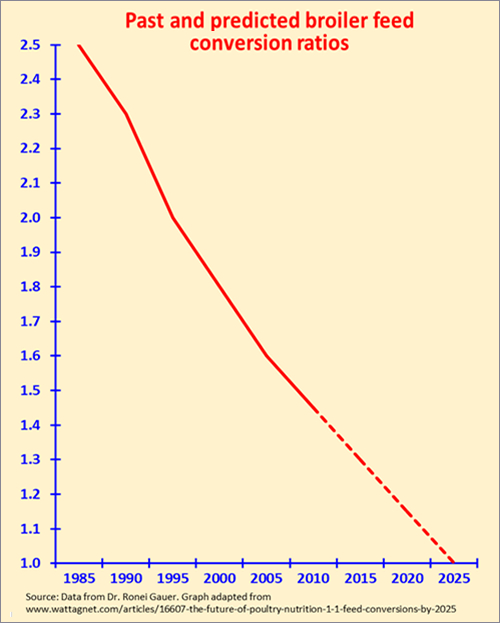 Whether it is cars or electronics, products that consistently innovate over many decades enjoy booming consumption amid constantly falling prices –and chicken is no exception.
From 4.5kg (10lbs) at the start of the 20th century, US per capita chicken consumption jumped to 10kg (22lbs) by the mid-1950s. Thereafter, the pace of innovation accelerated, with chicken consumption growing twice as fast as before.
As a result, US per capita chicken consumption totaled 20kg (44lbs) by the late 1970s and 30kg (66lbs) in the mid-1990s, when it exceeded US beef consumption for the first time. By 2015, each American on average ate 40kg (88lbs) of chicken annually, with the USDA projecting it to rise to 42kg (93lbs) in 2019. Nor is America exceptional: Comparably rapid per capita consumption increases from 5kg in the 1960s to approximately 35kg today can be seen in nations as dissimilar as Britain and Brazil.
Even if it turns out that humans do not want to eat much more than 45kg of chicken a year, there are 3.5 billion people in India, China, Southeast Asia and Africa that eat less than 10kg of chicken a year –but will one day consume many times more. Such are the pent-up dynamics of chicken even after a century of rapid growth.
Much of the stimulated demand comes from the way chicken's quantity, quality and productivity went in a completely different direction from its price, which has fallen by nearly 50% over six decades: Expressed in constant 2018 dollars, poultry's average price has fallen from US$8.00/kg (US$3.63/lb) in 1960 to US$4.23/kg (US$1.92/kg).
Genetics was the single most important factor in boosting poultry productivity and lowering prices –and has an even greater role to play in future protein production. Yearly productivity increases from improving poultry genetics are nominally incremental –but works much like compound interest. Consequently, six decades of non-stop genetic fine-tuning profoundly transformed poultry rearing and even the chickens themselves.
Chickens: Bigger, fast growing, requiring less feed
In 1991 and 2001 trials, Havenstein et al (2003 and associated papers) compared the productivity of modern broilers to the "genetic average" of control group broilers created from a cross of commercial strains commonly farmed in 1957.
When fed the same diets for 56 days, 1991 finishing weights were 3.47 times heavier than those of 1957 birds in the 1991 study and 4.36 times heavier in the 2001 study. Broiler weight increased 3.4% annually from 1957 through 1991 and at a 3.1% rate in the 2001 study.
A later study (Zuidhof et al. 2014, University of Alberta, Canada) found that broiler weights increased at a 3.3% rate and FCRs 2.55% annually from 1957 through 2005. Diet changes accounted for no more than 10% of the weight gain. The other 90% was due to decades of gradually fine-tuning poultry genetics.
By 2015, 50% less feed was required to produce a kg of chicken meat was 50% less than in the late 1950s; 67% less in the case of breast meat. Grow out time has also fallen by over 40%: It took up to 60 days for broilers to reach maturity in the 1950s. By 2017, the most efficient birds matured in 35 days.
While broiler genetics continue to improve, they do so more slowly than before: The 2006 to 2016 decade is estimated to have produced a 2% annual improvement in finishing weights (Hill et al. 2016). The slowdown occurred because rising broiler weights created leg strain, along with more injuries and collapsed legs. Even so, by breeding broilers with genetically strong legs, layer breeders have been able to continue boosting finishing weights (Kapell et al.2012).

Genetics also improved layer efficiency, though not to the extent it did in broilers. Both in a study done at the turn of the century (Jones et al. 2001) and a more recent one (Hill et al. 2016), layer feed conversion efficiency increased 0.7% annually since the 1950s. This is a mere fraction of the 2.55% annual improvement in broiler FCRs over these same six decades.
Granted, modern layers are up to 50% more feed efficient than their 1950s counterparts. They also lay larger eggs, start at a younger age and do so for a longer time than before. –They still however, cannot lay more than one egg per day.
There is however, also a highly problematic angle to the post-1950 increase in broiler efficiency. By enabling the boosting of stocking densities, boosting growth and covering up for unsanitary conditions, antibiotics also played a key role in the late 20th-century acceleration in poultry production.
With pathogen resistance to antibiotics rising and some studies blaming the use of antimicrobial growth promoters (AGPs), the bad news is that the use of AGPs must be phased out. Sweden did so in the late 20th century. The EU followed in 2006, South Korea and Japan did so in the 2010s. At this time, everyone from America to Vietnam is either gradually phasing out the use of AGPs or greatly restricting their use.
The good news is that we finally understand the causation mechanism by which AGPs boost growth –and this is making their phasing out and replacement with vaccines and natural growth promoters (NGPs) possible.
According to Theodore A. Niewold, health and nutrition professor at Belgium's University of Leuven, AGPs stimulate livestock growth by minimizing livestock immune system activity. –The latter is a proxy for immune system-induced inflammation reduced appetite, muscle (a.k.a. meat) wasting and high gut pathogen populations.
An episode of full-scale antibody production pinches livestock meat volume by 3%. A chronically inflammatory state can reduce finishing weights by up to 30%. Without a sustainable alternative to AGP supplementation, modern high-density poultry housings will put chicken immune systems in a state of perpetual inflammation. –Fortunately, a three-pronged alternative to AGP supplementation is already in use and constantly being fine-tuned.
First, a wide range of organic acids, plant extracts, essential oils, table spices and even mundane compounds found in butter mimic the metabolic action of AGPs. Similarly, a wide range of compounds found in mundane substances including lemongrass, butter, cinnamon and organic acids such as formic or propionic also function as natural growth promoters (NGPs) –each with a similar causation mechanism as an antibiotic they replace. 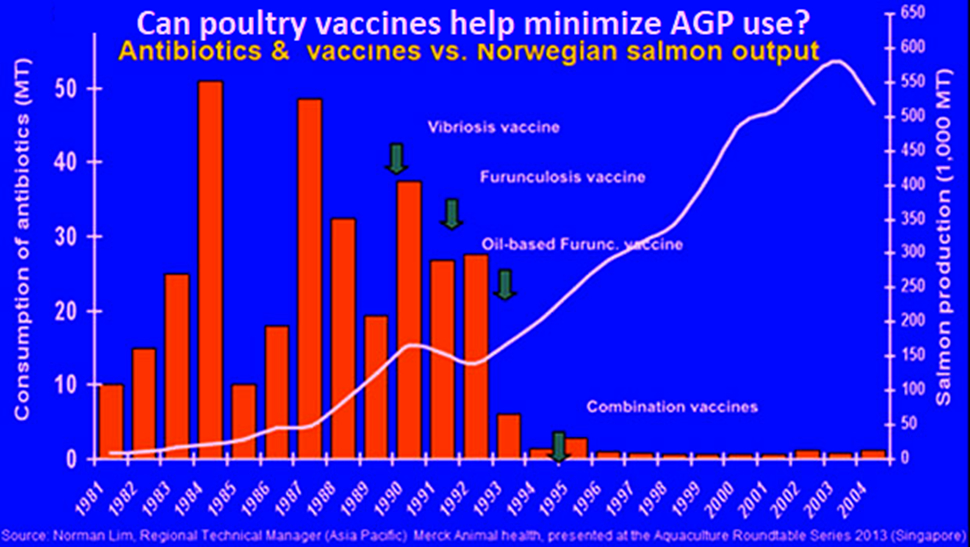 Niewald states that NGPs like salicylic acid (a.k.a. aspirin) impact the same metabolic pathways and have the same anti-inflammatory effects as many AGPs. By testing for the presence of such anti-inflammatory biomarkers, non-antibiotic growth promoters are gradually being identified and substituted in place of existing antibiotic supplementation.
This replacement of AGPs with NGPs comes at price but we have found a partial solution: While bacteria will not develop resistance to NGPs, they do not permit the same high stocking densities as their AGP predecessors.
Second, science has also developed a partial solution to the above-mentioned trade-off between NGP use and the lower stocking densities they imply.
Norwegian salmon farms have demonstrated that by using developing pathogen-specific vaccines, AGPs could be eliminated and overall antimicrobial use reduced by 99% --while boosting protein production by several hundred percent.
Vaccine stimulated immunity to a broad range of diseases can in theory, make possible high stocking densities possible without using AGPs. That is why vaccines have taken a place alongside genetics as an important poultry science research frontier. 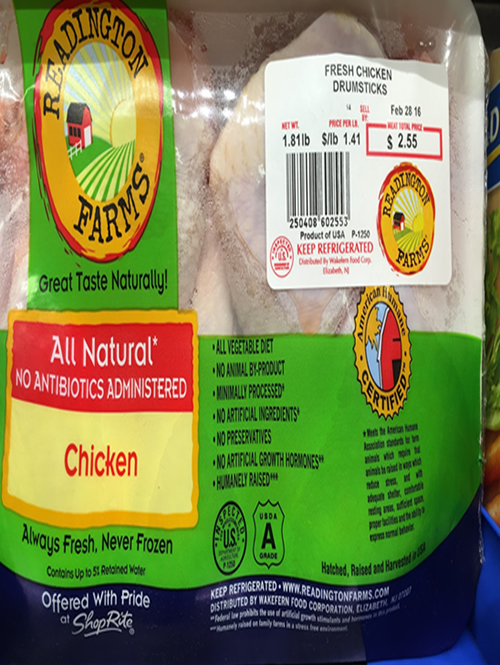 Needless to say, it would be optimistic to assume that vaccines can single-handedly pull off a 99% drop in antibiotic use and tripling of production for broiler meat the way they did for salmon. Fish have far less complex immune systems and face different technical challenges. Nevertheless, there is no doubt that together with AGPs, vaccines will also play a role in making high stocking densities possible without recourse to AGPs.
Third, with physical limits on chicken size becoming an impediment to expanding finishing weights, researchers had already turned their attention to fine-tuning other aspects of poultry performance. In the future, we can expect poultry geneticists to increasingly turn their attention fine-tuning chicken immune system genetics.
At this time, researchers are using a combination of NGPs and vaccines to re-create the immune system conditions and poultry performance improvements previously made possible by AGPs. Because  AGPs improved poultry performance through its effect on the immune response, future innovation will involve fine-tuning poultry immune system genetics so as to maximize the effectiveness of the NGPs and vaccines being substituted in place of AGPs –and the industry was given plenty of warning time, too.
The warning bell was sounded by Sweden's ban on antibiotic growth promoters (AGPs) in 1986. That was followed by the EU banning AGPs in 2006. Similar (but more flexible) restrictions on AGP use came into effect in Japan and South Korea after 2010. America's FDA is currently phasing out AGP use of antibiotics critical to human medicine –but its integrators are already ahead of the curve.
Tyson, Perdue and other large integrators began researching and planning AGP free meat production in the early 2010s, several years before the FDA began tightening its regulations. Like their European counterparts, they and other large US integrators both now produce antibiotic-free chicken meat and eggs.
Thus, whether it is antibiotic-free chicken for export to EU raised by Thailand or AGP-free fast food in America, the crisis created by phasing out AGPs is stimulating yet another chapter in chicken's ongoing re-invention –and further enhances poultry's paradoxical status of being a very old, yet constantly re-invented commodity.
On one hand, chicken is a product as old as human history, while most "sexy" new products did not exist a few decades ago. On the other hand, whereas cars stopped evolving rapidly after 30 years and I.T. is only a half-century old, even after a hundred years, poultry rearing continues to surprise us with new, unexpected transformations: Poultry's latest reincarnation is that of being the first fully ecologically sustainable livestock meat line.
Once a fringe topic, antibiotic-free meat is now mainstream and in demand by better educated, upmarket consumers. Coincidentally, both livestock producers and their distribution partners have signaled a strong willingness to have their meat perceived as healthy, ecologically friendly and sustainable.
The last five years have seen supermarkets in America, Europe, Japan, South Korea and Singapore undertake the mass marketing of chicken grown without AGPs. Similarly, leading US and European supermarkets, fast food chains including McDonald's, Subway, Chipotle, Panera, Starbucks, Burger King and Chick-fil-A have all either started offering antibiotic-free chicken or promise to do so within a few years.
In the early 1900s, few people could have imagined that chicken meat (which was traditionally derived from discarded layers) would one day be harvested from broilers raised for such a specific purpose. They could not have foreseen a day when the world's wealthiest people would eat 15kg of chicken each, let alone the 40kg which is now the norm in America, Singapore or many European countries. Or that antibiotics would first be seen as saviors, later villains or that the demise of AGPs would spur as much innovation as their introduction.
Similarly, it is difficult to project what the chicken of the future will be like, except to say that constant, ongoing change will be poultry farming's only constant.