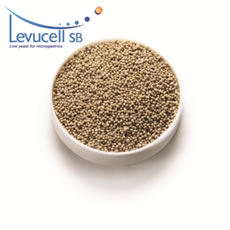 Lallemand Animal Nutrition's probiotic yeast, LEVUCELL SB, was recently awarded at the SPACE livestock show in Rennes, France, in September this year.
The achievement came after the product was authorised in the EU as a zootechnical feed additive for chickens and minor avian species for fattening.
The Saccharomyces cerevisiae var. boulardii CNCM I-1079 yeast strain underwent an approval process that scrutinised its efficacy in reducing carcass contamination by enteropathogens and improving growth performance, said Amandine Cabot, Lallemand's marketing coordinator for poultry feed additives. Its effectiveness in combating salmonella and other pathogens underscores its "innovative value," she pointed out.
"We provided trial data in line with the European guidelines stressing the LEVUCELL SB's capability to reduce salmonella contamination, as well as improving zootechnical benefits," she explained to eFeedLink during the SPACE show.
Those data were backed by other findings from trials in other European and Asian countries. In the south of France, one research produced valuable information pertaining to broiler resistance within birds that were found to be infected with viral bronchitis. In that particular case, LEVUCELL SB had significantly reduced the birds' mortality.
In the current trend of "de-medication", LEVUCELL SB is a "global solution" that helps improve animal gut health and stimulates gut performance - the effect on carcass microbial contamination being a direct consequence, Cabot said.
"[LEVUCELL SB] is fully compatible with local [animal health management and disease prevention] strategies that also employ other measures including the use of minerals and antibiotics [in areas where the use of antibiotics is still approved]. As a live yeast, LEVUCELL SB can be used together with a variety of other solutions," she explained.
As a result, LEVUCELL SB helps to reduce antibiotics use. Cabot stressed its advantages in terms of microbial balance and its various effects on gut integrity and immune system modulation.
A key to the successful delivery of the product's benefits is the maintaining of live yeast as it enters the animal's gut. To ensure yeast cells are intact prior to ingestion and then viable and active in the gut, Lallemand created the Titan microencapsulation technique that protects the microorganisms during pelleting conditions which involve heat, pressure and humidity, and during interaction with other chemical compounds used in feed production.
Sylvie Roquefeuil, Lallemand's communications manager, who was also at SPACE, pointed to viability studies that the company conducted on different types of yeasts, together with the application of the Titan microencapsulation. The findings were being determined by the colony-forming unit (CFU), which estimates the number of viable bacteria or fungal cells in a sample. With the application of Titan, LEVUCELL SB yeasts are relatively unaffected.
Another key to the product's efficacy is the selection of the right yeast strain for a specific purpose.
"As a leader in microbial fermentation, we believe that each strain of yeast has its own capacity in regards to metabolism, thus influencing its application within certain animal productions. We need to better understand what makes each strain different, and which strain is the best for specific applications," Cabot said. She highlighted Lallemand's consistent effort to better understand microbes functions in animal guts, before product development.
"It's about making yeast that is able to scavenge oxygen within the gut, thus creating benefits that lead to a lower risk of salmonella or campylobacter," Cabot added. 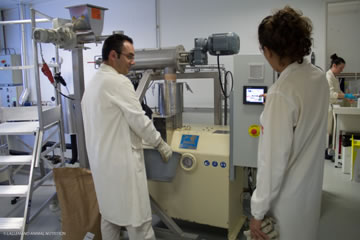 Lallemand's laboratory technical service.
Given the complexity of Lallemand products, the company sees a need for their proper application in order to get the best results. According to Roquefeuil, this is supported by the company's laboratory service, which uses precision equipment to test processes for LEVUCELL SB's application.
"We provide a full range of other technical support and educational services for livestock issues, including those concerning ruminants and swine," she added.
Despite the latest milestone achieved with LEVUCELL SB, much work remains to be done in uncovering the full scope of its efficacy, given that  the product is also used for managing swine gut health.
"When you have animals supplemented with LEVUCELL SB, there are many [production] targets that should be investigated," Cabot commented.
"We need to explore again on the benefits of this specific yeast strain to ensure the best benefits for poultry production. From the farm to the fork, from gut health to poultry food products safety, we believe there are a lot of opportunities for LEVUCELL SB," Cabot said.
- TERRY TAN