The six winners of this year's Dairy Industry Asia Pacific Awards 2019 were announced at a special awards ceremony at One Farrer Hotel, Singapore on the evening of November 21. The ceremony was hosted by Duxes, the organisers of the 6th Dairy Asia Pacific Summit 2019 (DairyAP), and aimed to recognise the most outstanding products and contributions to the region's dairy market over the past 12 months. 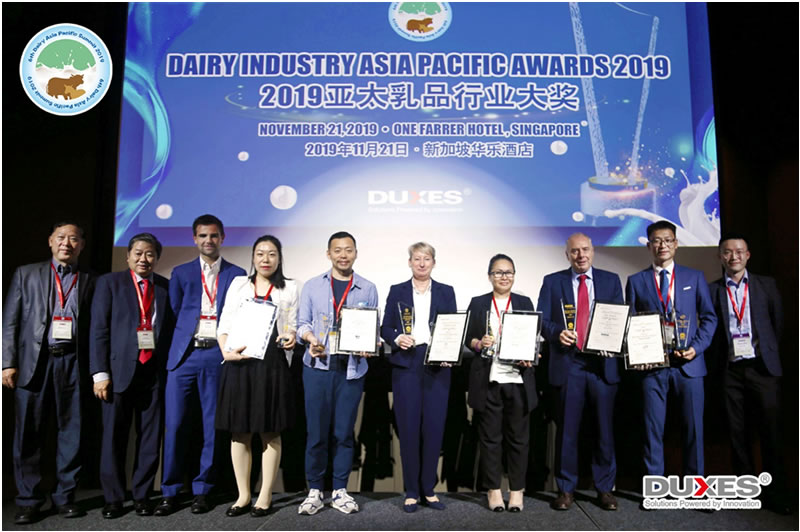 There were six prizes awarded in total. The products and companies honoured ranged from an innovative new line of probiotic yogurts, to a plant-based dairy beverage aimed at Asia's increasingly enthusiastic coffee-drinking consumers, through to a high-tech packaging solution that promotes food safety in the infant nutrition segment.

Proceedings for the well-attended evening gathering were led by local F&B industry professional Bob den Hartog, managing director for Arla Foods Trading & Procurement in Hong Kong. The audience included a gathering of leading figures and influencers from the dairy business in the Asia-Pacific region, including those who were in Singapore for the corresponding DairyAP 2019 summit, which runs from November 21-22.

The first prize of the night was collected by Chr. Hansen for its Sweety Y-1 "naturally sweeter" dairy culture which won Best Dairy Ingredient Innovation of the Year. Sweety Y-1 was developed with the participation of an in-house team of experts at Chr. Hansen's research laboratories in Denmark. Using groundbreaking technology they were able to produce a bio-culture that converts sugar differently to traditional processes, resulting in a sweeter-tasting yogurt. This means that less sugar needs to be added to counterbalance yogurt's naturally sour flavor, and Chr. Hansen's customers can benefit from a healthier end product. Sweety Y-1 has received praise from industry analysts and technical food scientists alike.

Other winners included UNITED CAPS who won Most Welcomed Packaging Solution of the Year for its 127 SAFE-TE tamper-evident closure, specially designed for the needs of the Asian infant nutrition market. The 127 SAFE-TE closure increases baby food safety and convenience as it boasts an impenetrable security feature which means it cannot be opened and resealed. In this way, it addresses a key concern of customers in Asia.
Following on from its other popular products, UNITED CAPS' 127 SAFE-TE closure comes complete with a scoop and a hygienic seal. It also comes in a range of colours, including gold, which has been met with high demand in the premium market. Notably, UNITED CAPS has also been able to develop the brand-new product in such a way that existing production lines would need to make minimal changes to incorporate the new closure into their factory capping and filling processes.

Meanwhile, well-known Sweden-based newcomer Oatly won Popular Asia-Pacific Plant Based Drink of the Year for their Barista Edition foamable oatmilk drink, which was specially developed so that it can be used as a dairy alternative when making popular milky, caffeinated drinks such as lattes and cappuccinos.

Local dairy giant Yili was given the Best Yogurt Innovation of the Year award for its Yili Yixiao Fermented Milk. This drink series was first developed by Yili experts at their main innovation centre in Shanghai, and centres around a particular species of probiotic named Bifidobacterium lactis (B. lactis). The resulting strain that Yili now uses in its Yixiao series, Bifidobacterium strain BL-99, has shown promise in treating a range of digestion-related conditions, from intestinal infections to irritable bowel syndrome, according to the company. Having their own, marketable strain of probotics has given Yili a distinctive edge on the market when it comes to competing with the world's biggest, most-established brands from Europe.

The award for Most Sustainable & Innovative Rigid Packaging Solution of the Year went to PolyOne for its ColorMatrix Lactra light-blocking additive. This is a unique additive that can be used during the manufacturing process for PET bottles. Because of its unique qualities, it reduces the breakdown of dairy products whilst they are exposed to light, making them stay fresher and giving them a longer shelf-life.

Finally, the award for Most Impactful Brand of the Year went to Theland for Milk New Zealand. The Chinese-owned dairy farm group hit the headlines in recent years after it secured a trading agreement with online retailer Alibaba to market its fresh milk direct to Chinese consumers. Through its network of farms in New Zealand and the unique advantages of grass farming, natural grazing and natural milk production, Theland has also been able to produce its 4.0 Protein Pure Milk product. This liquid milk has a higher than normal nutrition profile, and has been a big hit with online buyers. During China's annual '618' shopping festival this June, some 250,000 boxes of 4.0 Protein Pure Milk were snapped up in just two hours.

Another of Milk New Zealand's breakthrough achievements has been to reduce farm-to-retailer shipping times. Thanks to an agreement with Shanghai Customs and Changning District Government, the company has been able to deliver products to the mainland in less than 72 hours, faster than any other brand so far, winning much praise from industry peers and setting a new benchmark standard.

At the end of the eventful awards ceremony, host den Hartog thanked the prize-winners and all of those present for their contribution to making 2019 an innovative and breakthrough year, during which consumer awareness for dairy has risen throughout the region, and new sales channels such as e-commerce have led to the development of a diverse range of dairy products that have added incredible variety to Asia's already-rich food culture.

More information on the 6th DairyAP 2019 can be found at http://www.duxes-foodbeverage.com/dairy-ap/index.html