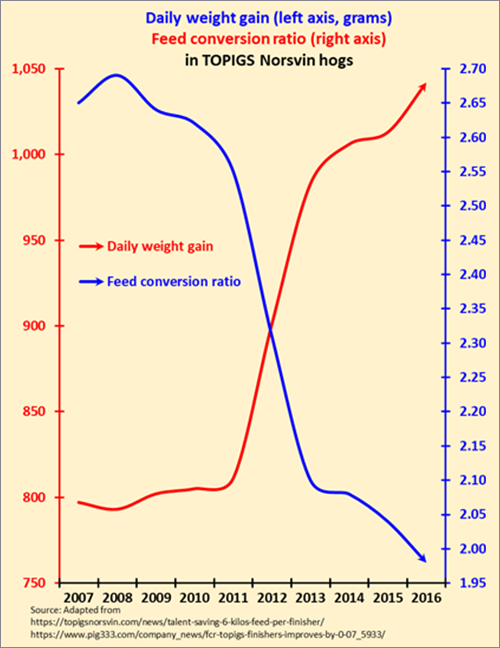 The genetic engineering of livestock is agribusiness's most misunderstood technological frontier. Shortly after animals were domesticated 10,500 years ago, farmers noticed some swine, poultry or cattle yielded more meat, milk, eggs or offspring than others. Livestock breeding was born –and in retrospect, it was a slow, blind man's version of selecting ideal genes.
Fortunately, late 20th century advances in genetic engineering allow us to fine-tune farm animal traits. Livestock with genetically superior feed conversion, fertility or muscle mass can be developed with far greater speed and precision than ever before.
While genetics had the greatest impact on poultry, it is a species with two distinct products. In terms of pure meat line transformation, the impressive improvement in poultry genetics is rivaled by the gene-driven transformation of swine. Numerically speaking, a superficial analysis tells us that from 1930 through 2015, the average annual hog improvement in swine FCR (0.6%) and slaughter weight (0.6%) was significantly below that of chickens –but all this was more than made up for by other factors.
Whereas chickens are stuck at laying one egg per day, at 0.6% multiplied by 85 years, sow fertility skyrocketed far faster than that of poultry. Consequently, over 85 years, the annual quantity of pork produced per sow (2.8%) has risen at a rate that has no compare in the poultry world.
That's not just because each sow is are producing far more piglets than before: Modern swine genetics are a far superior meat making machine than the pigs of our grandparent's generation.
According to the USDA, annual sow piglet production jumped from 8 in 1930 to 15 in the early 1990s and nearly 25 today. Pork production per sow increased approximately 566%, from 300kg/year in 1930 to approximately 2,000kg/year today.
That's partly due to improving swine FCRs and faster weight gain. In 1930, a young Dutch Landrace or Yorkshire pig gained 500g/day to 550g/day. This had increased to 840g/day a day by 1990 and up to 950g/day today.
Whereas native hog breeds had FCRs above 4.0, Landrace and Yorkshire FCRs have fallen from 3.5 in 1930 to 2.7 in 1990 and as low as 2.3 today –this was once the FCR level taken for granted in some chicken breeds. This increased feed efficiency, in turn, changed both the quantity of hog meat and quality of hogs.
According to the USDA, from 65kg in 1930, US live hog finishing weights reached 80kg by the late 1980s, and peaked at 130kg in 2016 –but doubling pig size achieved more than a mere doubling of pork production.
Traditional swine embodied the "fat as a pig" insult, with a relatively low percentage of body weight in muscle. Thanks to improved pig genetics, this is no longer the case: From 1950 through 2015, US hog finishing weights roughly doubled, but the amount of fat within carcasses fell by 75%, with 30% of this reduction achieved since 1980. Once used as lard, backfat thickness has been reduced 75%, from over 7.0cm in the 1940s to 1.8cm today.
When an overweight human reduces their body fat by 75% while tripling their muscle mass, they have achieved the body form of an Olympic athlete. The same is true of today's genetically improved pigs. Hence, saying that someone is "fat like a pig" is simply no longer true.
Due to the vast, constant improvement in swine carcasses, from the 1960s through today, the USDA has been forced to repeatedly redefine the meat and fat content of its hog grades. By 1968 for example, so many hogs had meat content far above the USDA's traditional #1 grade that a new standard was created. The original 1952 #1 grade criteria became the standard for #2 grade hogs. –Even so, by 1980, over 70% of hogs were again at the level of #1 grade or higher. That forced the USDA to again revise its hog grading standard in 1985, forcing it to relegate its 1968 #1 grade criteria to #2. 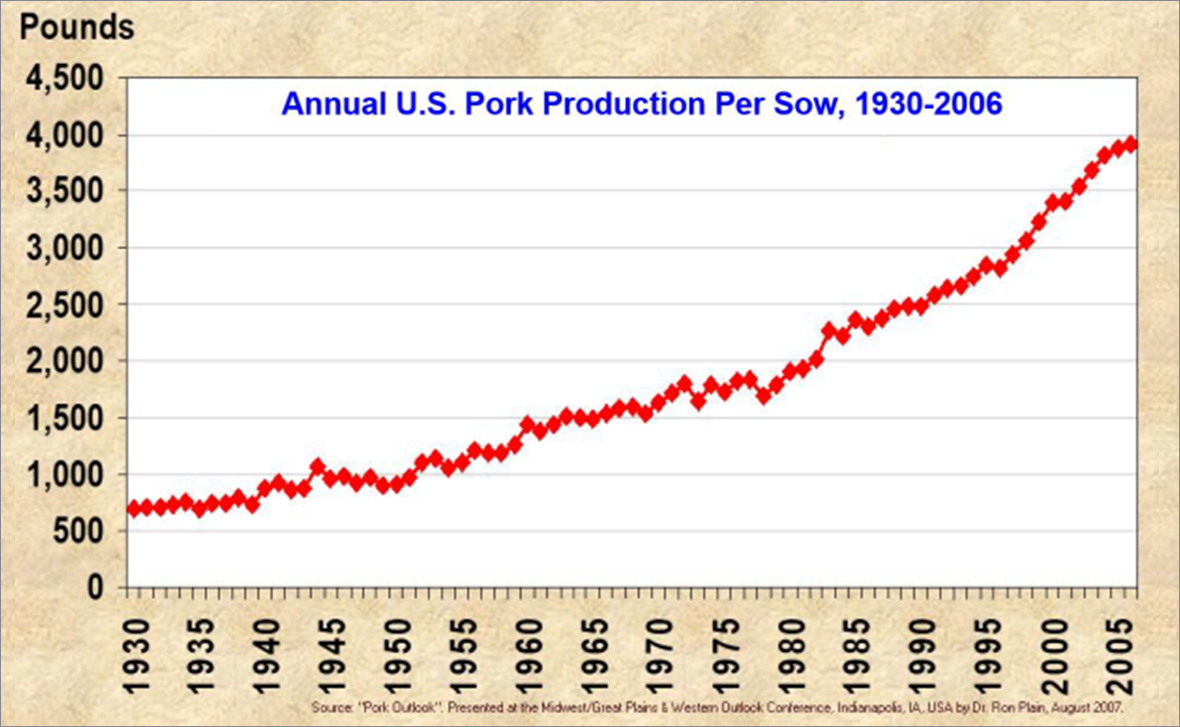 All this has tripled the quantity of pork we can get from each hog, which produces each kg of meat by eating significantly less feed than before.
Naturally, these improvements in swine efficiency have come at a price. For example, once well adapted to being raised outdoors and surviving harsh winters, the low fat, high muscle content of modern hogs leaves them with insufficient body fat to survive cold weather in unheated, outdoor pens in the way traditional pigs did. This may be contributing to a high rate of disease outbreaks in nations like China, where many backyard farms still hold hogs in unheated pens.
The biggest problem is that genetic improvement is a victim of its own success: On one hand, increasing livestock efficiency entailed boosting muscle content, making meat quality more consistent and minimizing fat –but the latter two have an inverse relationship with meat taste. –Despite countless health campaigns against consuming fat, humans are biologically 'hard wired' to find protein with a high, heterogeneous fat content tasty.
Consumers are complaining that modern pork and chicken meat has a much blander, less unique taste than it did in the past –and the market is responding to this complaint. Many farmers in China, Russia, America, Philippines, Spain and other nations have reverted to raising traditional native hog and broiler breeds. Native breeds cost twice as much to feed, have far lower meat yields and sell at a far higher price than mainstream chicken or pork –but they are increasing in popularity, particularly among well educated, high income and health-conscious consumers.
There is more to all this than marketing illusions: Removing fat from meat does make it less tasty and is an unfortunate side-effect of making increasingly efficient animals. Moreover, whereas lean meat was once touted as "healthy", we now know that saturated fat's health dangers were exaggerated. New research even shows eating meat high in saturated fats even carries health benefits.
While 80% or more of chicken, pork and beef can come from efficient, modern breeds, everywhere from America to Korea to Portugal, consumers stubbornly consume meat from traditionally raised animals, especially on special occasions and traditional holidays.
Meeting the needs of that 20% niche that prefers traditional meat taste needs to become a livestock genetics priority. Researchers have to create niche breeds with higher, heterogeneous fat content and traditional taste but with the feed efficiency and grow out times comparable to that of modern livestock breeds.
Genetics must come to the rescue of the greatest sea change in farm management: The worldwide movement towards banning antibiotic growth promoters (AGPs). We now know that AGPs boosted livestock productivity via their impact on gut health and the immune system.
New livestock breeds that can tolerate high stocking densities and which have genetically 'fine-tuned' guts and immune systems would greatly compliment the natural growth promoters being substituted in place of AGPs.
They would also ensure that a greater proportion of a species or livestock herd would respond to developed vaccines. Going forward, the genetics-based fine-tuning of animal immune systems could also play a role in the control and eradication of many diseases ranging from bird flu in poultry to EMS in shrimp.
One thing is for certain: Whether it creating traditional meat taste in an efficient, cost-effective manner or in the movement towards sustainable, AGP-free livestock, animal genetics will be at the forefront of meeting all the major agribusiness challenges of our era.