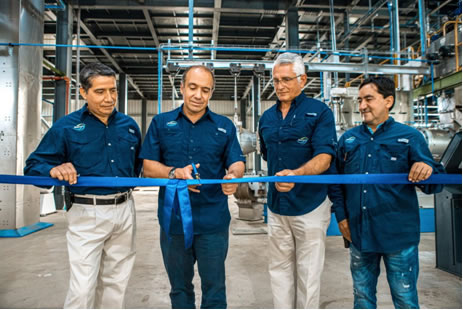 The impact of the COVID-19 crisis experienced in the Ecuadorian shrimp market has not waived the company's strategic plans for its shrimp business. Construction of the new line has remained unaffected by the pandemic and builds on four decades of BioMar experience in extrusion technology.

Carlos Díaz, CEO of BioMar Group, officially opened the new line at the facility. Since acquiring the Ecuadorian business back in 2017, BioMar increased R&D capabilities with the construction of the ATC Ecuador (Aquaculture Technology Center) in 2018 and a first production capacity expansion in the plant took place in 2019.

"We are fast establishing a global footprint in shrimp and this new line brings increased flexibility and increased choice for our customers as it will expand our capacity for extruded and value-added feed solutions," adds Aarestrup. "We also just went through a debottlenecking in our plant in Costa Rica increasing the shrimp feed capacity of that plant, which was originally designed for tilapia feed but now produces feed for both fish and shrimp to customers all over Central America".

Together with the inauguration BioMar launched a new high-end diet, EXIA Maxio, targeting the most intensive part of the Ecuadorian shrimp farming sector.

"We have in the last months seen a reversal of the tendency to use lower protein levels in the feed experienced in the first part of the year, and the EXIA Maxio fits those customers looking for more nutritional dense diets", says Danny Velez, general manager of BioMar Ecuador.