Held back by a stagnant domestic market and fearing that the ASF-induced pork export boom is temporary and volatile, Brazilian farmers are behaving prudently: It's been a paradoxical year, with both prosperity and disappointed expectations.
Several years ago, the industry finally appeared to be on the way to a full recovery from its 2007 ban from the EU for sanitary reasons. It left Brazilian pork in a far weaker position than its chicken or beef sectors, which lead the world in exports. It took Brazil several years to replace the loss of EU customers.
First came Ukraine, which set back the industry when it first banned Brazilian pork to protect its own farmers, then never let in as much as before.
By mid-decade Russia replaced Ukraine as Brazilian pork's main export market.
--And just when it looked ready to break the one million tonne export barrier before 2020, a meat sanitation scandal was exposed in 2017.
Just as the industry was recovering from that embarrassment, Russia suddenly banned Brazilian pork, resulting in the overnight loss of 236,000 tonnes in annual exports. Coinciding with a serious, long-term slowdown in Brazil's once-booming economy, the loss of Russia's market was a serious blow.
In the past year, however, China's African Swine Fever (ASF) epidemic has been a two-sided blessing. It offers the prospect of trade-driven growth and could give the industry several highly prosperous years. Moreover, China openly prefers importing pork from Brazil rather than traditional western suppliers, with whom it has politically stressed relationships.
On one hand, they are producing 3.8% more piglets in 2019 to take advantage of an ASF-induced world pork shortage, with the number rising from 40.954 million last year to a USDA estimated 42.5 million in 2019.
On the other hand, domestic consumption makes up almost 80% of pork demand but has only risen at a 1.4% annual pace since 2015. After increasing 2.2% from 3.035 to 3.102 million tonnes in 2019, a slowing economy will make it level off at 3.107 tonnes in 2020, only 0.2% higher.
Consequently, Brazilian farmers are harvesting a bumper piglet crop to satisfy export demand rather than using it to grow their herds: With slaughter (+4.6%) rising an even faster than piglet production, stagnant inventories are falling slightly, dipping 1.8% from 38.427 million head in early 2019 to a USDA estimated 37.725 million at the start of 2020.
Both bumper piglet production and subsequent bumper slaughter rates are motivated by high pork export prices, which jumped from near US$1.10/kg near the start of the year and peaked near US$1.40/kg in August before falling back to US$1.20/kg in late Q3.
Going forward, the recent approval of pork processing plants for export to China should firm up prices. By late 2019, live hog prices may rebound close to their mid-year peaks.
While revenues have been expansionary and buoyant, a 4.3% reduction in H1 2019 feed prices had lowered hog production costs by 2.3% by the time of this article's publication. Partly due to the Brazilian real's 20% depreciation over the last year and 45% fall since 2013. Partly due to its lower quality reputation, Brazilian pork sells for substantially less than its American (-25%), Canadian (-33%) or EU (-50%) competition. 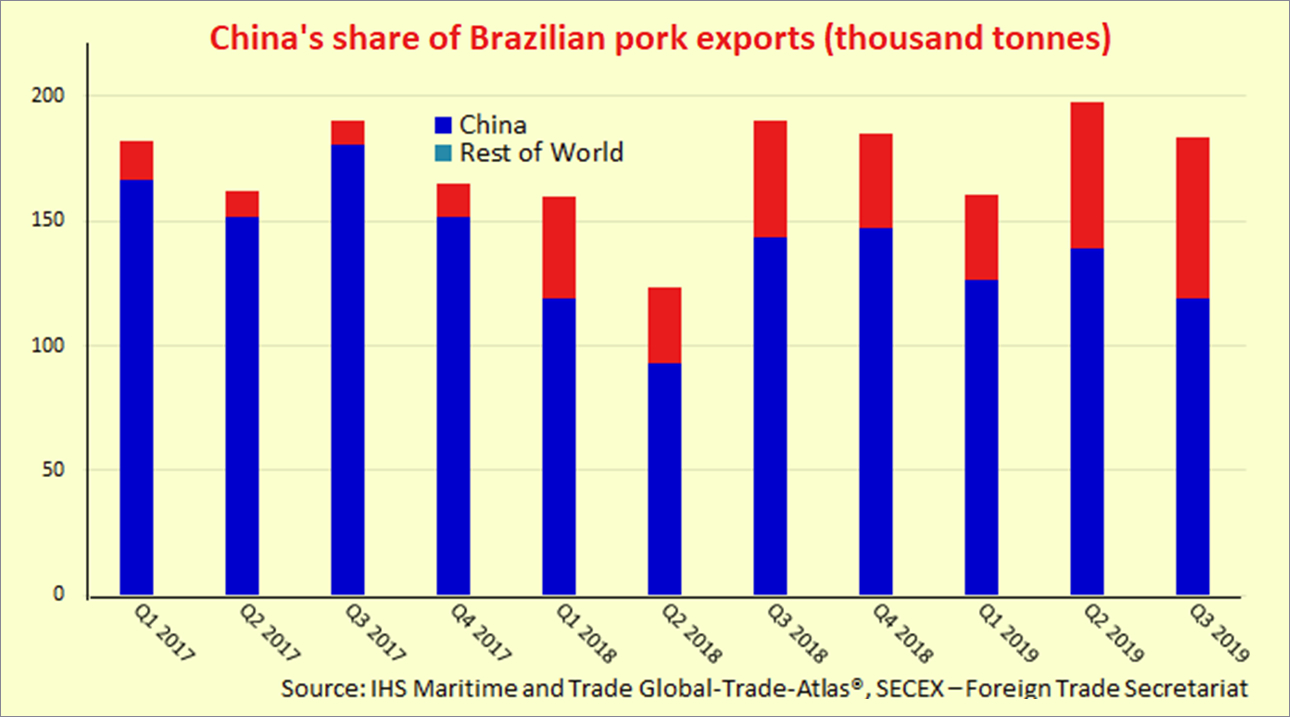 The good news is that for the first three quarters of 2019, Brazilian pork exports (including 27,000 tonnes of offal) totaled 551,400 tonnes, up 12% from 492,300 tonnes in the same period of 2018. From Q1 through Q3 2019 inclusive, pork exports to China jumped 34% in volume and revenues 67% from last year, totaling 156,000 tonnes versus 116,400 tonnes in the first three quarters of 2018. If exports to neighboring (and China-controlled) Hong Kong are included, then approximately half of Brazilian pork exports are destined for the Greater China region.
The bad news is that many pork processing plants approved for export to China from 2016 through 2018 were already operating at full capacity and could not further increase their export volumes.
China was aware of this problem and was supposed to approve more Brazilian pork processing plants for export in early 2019 –but delayed doing so.  In September China finally approved 25 Brazilian meat processing plants for export –but only one of them processed pork.
Only several weeks after an October summit between Chinese leader Xi Jiping and Brazilian President Jair Bolsinaro were an additional seven pork processing plants were approved for export to China. Unlike previously approvals, these new facilities were for the first time approved to export offal to China.
Finally, in mid-November, Brazilian agriculture minister Tereza Cristina Dias announced that a further thirteen pork processing plants had been approved for export to China.
China's six-month delay means that a large export surge that was supposed to occur in mid-2019 will only occur in 2020. As a result, the USDA initially expected Brazilian pork exports to surge from 730,000 tonnes last year to 900,000 tonnes this year recently trimmed its 2019 estimate to 875,000 tonnes.

New pork processing plant approvals also means that going forward 2020 exports are projected to surge 20%, to a record 1.05 million tonnes. This is good news for Brazil. As the attached graph shows, both while production growth is much slower than before, this is due to stagnant domestic consumption, which is a by-product of decade long economic stagnation.
The last five years has seen exports recover from their 2005-15 slump and with China's blessing, that trend will continue into at least the early 2020s.
Over the longer term, Brazil faces a dilemma: While overall exports are booming, this is only true because of China. Five years ago, fewer than 3% of Brazilian pork exports were shipped to China. Collectively, almost half of all pork exports are now shipped to either China or Hong Kong.
But while exports to China have skyrocketed, shipments to all other countries are stagnant. From 262,000 tonnes in H1 2017, shipments to all destinations except China and Hong Kong fell to 187,000 tonnes in H1 2019.
As the above graph shows, this is partly due to the entire loss of Russia's market for over a year but exports to Russia are growing again, the number of pork processing plants approved for export means that volumes cannot reach their 2017 record under current conditions.
Moreover, after China/Hong Kong, the next five top export destinations are Singapore, Russia, Argentina, Chile and Uruguay –and none of them buys more than 50,000 tonnes annually.
Hence, after the 2007 loss of the EU market, Brazil first tried to replace it with Ukraine, which later temporarily banned its pork and never imported as much again. The same happened with Russia several years later. Now a similar export bubble involving rapid shipment growth to China is emerging.
On one hand, China is less likely to turn its back on Brazilian pork than the EU, Ukraine or Russia. On the other hand, until Brazilian pork can match the quality standards of its Spanish, Danish or Canadian competition, it will have trouble rising beyond its status as a tier two supplier that is overly dependent on one large market or another.