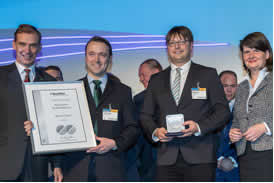 DLG, the German Agricultural Society, presented BIOMIN with an Innovation Award EuroTier 2016 Silver Medal for PoultryStar® on the eve of EuroTier 2016 in Hannover, Germany.

"We are delighted by the award, particularly given that PoultryStar® was the only additive among the 25 innovations recognised," said Dr. Daniel Petri, global product line manager (Microbials) at BIOMIN。

The sterile environment that characterises modern production systems put chicks at a disadvantage in terms of immune system and gut microbiota development. "The innovation at the heart of PoultryStar® is to select probiotic strains that are genuinely necessary for good gut health in poultry," explained Dr. Petri. "The advantages of using a mix of strains including lactic acid bacteria, hinge on the fact that they colonise the gastrointestinal tract (GIT) and are essential for good gut health. Consequently, they are able to support less reliance on antibiotics, better uniformity, fewer condemnations, lower mortality and subsequently, consistently good performance."

PoultryStar® is a multi-strain synbiotic from poultry for poultry, which promotes healthy gut microbiota through specific probiotic microorganisms and prebiotic fructo-oligosaccharides (FOS). It was specifically designed to improve avian gut health and to support immune development in day old chicks and poultry of all ages. Efficacy of PoultryStar has been repeatedly demonstrated in scientific and field studies, and is currently under evaluation to support hatchery application as well.

In the EU, PoultryStar® is certified for use in organic production and is available for in feed and drinking water application. PoultryStar® is registered in the EU as gut flora stabiliser for broilers, chickens reared for laying and minor avian species. Extension of permission to turkeys and chickens in lay are in preparation.