Chinese aquaculture outgrows its resource base
By ERIC J. BROOKS 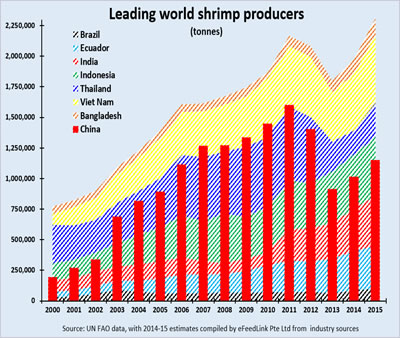 Two decades ago a plethora of unopened frontier regions and low domestic consumption allowed China's seafood supply to grow far more rapidly than domestic demand. Soon thereafter, China became an aquaculture superpower, single-handedly producing nearly 70% of the world's farmed fish at one time.
This has fallen to 60% and is destined to gradually decline further, though it will remain the world's top producer. While China's demand for seafood will increasingly dominate the world seafood trade, it will do so increasingly as a buyer rather than as a seller.
Nowhere is Chinese aquaculture's ongoing transformation from export driven to mass importer more advanced than in its once booming shrimp sector. Going from a mere 192,000 tonnes in 2000, shrimp output jumped 652% in ten years, totaling 1.45 million tonnes by 2010.
The exponential growth made China the world's top shrimp grower, producing twice as much as Thailand, its next nearest competitor. China's share of world shrimp production also rose strongly, from 16% in 2000 to 38% by 2010.
Shrimp exports grew even faster, tripling in ten years, from an FAO estimated 94,000 tonnes in 2000 to 274,000 tonnes in 2010. It was the second largest shrimp exporter in the years through to 2013, second only to Thailand.
Output and exports peaked at 1.60 million tonnes and 305,200 tonnes respectively in 2011, just before EMS and several other intractable shrimp diseases devastated East Asian production. Nevertheless, even before the disease hit, output was already running up against natural capacity constraints.
A Canadian government study ("Crustaceans – China March 2014", www.agr.gc.ca/eng/industry-markets-and-trade/statistics-and-market-information/by-region/asia-pacific/crustaceans-china/?id=1414163233572) states that coastal shrimp farming areas were fully exploited by the late 1990s. New shrimp farms were started inland but even this new frontier is now fully exploited.
With demand increasing faster than productivity or stocking densities, the study concluded, "Given the increases in consumer consumption being noted, China will have to rely on imports."
Everyone expected this day to come but a succession of stubborn, intractable shrimp disease outbreaks made it arrive earlier than anticipated:  Shrimp output nosedived 35% from a 1.60 million tonne peak in 2011 peak, to 0.91 million tonnes by 2013, the lowest volume since 2005.
To make matters worse, low cost shrimp competitors in India, Vietnam and Ecuador stole foreign market shares that faltering production could no longer meet. Producing 40% of all farmed shrimp in 2011, China's share bottomed out at 25% in mid-2013, still languishes below 30% and looks set for a secular, longterm decline.
On one hand, considerable progress has been made in treating EMS and output should begin growing at a steady rate again within a year or two. On the other hand, with the exhaustion of frontier areas, output can no longer keep up with domestic demand, let alone satisfy export markets.
Consequently, after decades of 10%+ growth, by the end of 2016, China's shrimp output will have remained stuck below 1.2 million tonnes –lower than 2007's production amount– for a third consecutive year. With production running 25% below its all-time peak and domestic consumption 35% higher than in 2007, shrimp exports are plunging while import volumes are skyrocketing.
From a record 305,200 tonnes in 2011, industry sources estimate 2015's shrimp exports as low as 60,000 tonnes. Industry sources expect them to total no more than 150,000 tonnes in 2016. At the same time, imports nearly doubled, from 53,100 tonnes in 2011 to nearly 100,000 tonnes in 2015, with industry observers expecting them to total up to 130,000 tonnes this year.
Recent years have seen the country's imports from Vietnam, India and Ecuador increase sharply –and this is undermining the motivation to boost production as much as the scarcity of frontier areas. –In particular, with Vietnamese shrimp undercutting its Chinese competition by 20% to 25%, domestic prices cannot rise to levels that would motivate producers to even attempt a rapid output expansion.
Going forward, China will continue to be the world's leading shrimp producing nation; it just won't be able to keep up with domestic demand growth. Domestic consumption's gradual outracing of production growth will eventually make it the world's largest market for shrimp imports too. This requires a change in the way formerly the country's shrimp sector does business.
Formerly export-oriented domestic processors are already retooling for the domestic market. Imports, which will easily exceed 100,000 tonnes this year, could easily exceed 250,000 tonnes by 2025. –This implies that China is destined to overtake America as the world's largest single shrimp importing country.

In a similar vein, tilapia, China's other leading export-oriented seafood line, now finds itself dogged by many of the same constraints as its shrimp sector.
In 2002, tilapia farmers took advantage of China's entry into the WTO to become export-driven. From 2000 through 2015, output grew 9.1% annually, from 0.55 million tonnes in 2000 to 1.75 million tonnes in 2015.
From 2002 through to 2015, exports boomed, with a CAGR of 24%, peaking at a torrid 62% annual pace in the years from 2002 through 2007. Even after world economy nearly seized up in the late 2000s, exports expanded 16% annually from 2008 through 2013.
Thereafter, exports only expanded 0.5% annually from 2013 through to 2015. To make matters worse, with prices declining at one point by 25% and still 10% to 15% below the levels of recent years, earnings fell by even more than shipment volumes.
Having expanded tilapia processing capacity from 40,000 tonnes in 2002 to 700,000 tonnes by 2014, the resulting unused capacity inflated unit processing costs, thereby hurting producers' bottom lines. If the oversupplied world market's price drop of up to 25% over two years wasn't enough, an array of coincident factors made tilapia's price deflation more painful for Chinese producers.
Because of their reputation for low quality and having high antibiotic levels, Chinese tilapia is priced at a US$2.00/kg discount compared to many of its competitors. In the US, which absorbs over half of exports, tilapia from Taiwan and Indonesia sells for up to 60% more than its Chinese competition. IN sum, cheaper catfish species are displacing tilapia at the lower end of the market, while offering safer, high quality tilapia take the value-added top tier.
All this coincided with a faltering Chinese economy's job losses among factory workers and low income earners. That made it difficult for the domestic market to absorb tilapia that could no longer be exported.
With China, as is the case in the country's shrimp market, competition from lower cost Vietnamese white fish species such as pangassius have put a ceiling on domestic tilapia prices, thereby limiting profit margins too.
Outside China, just like tilapia displaced traditional wild caught white fish species like cod and haddock, it now finds itself being pushed aside by lower cost catfish type species (eg. pangassius). In 2000, tilapia made up 64% of whitefish aquaculture output, but this declined to 58% in 2015. This decline would have been steeper, had aggressive export growth in Africa and the Middle East not replaced falling tilapia shipments to Europe and America.
Tilapia's declining share of whitefish output reflects the ascendancy of lower wage ASEAN suppliers like Vietnam. Blessed with a lower cost tropical climate and offering meat yields of 40% (versus 35% for tilapia) and a wholesale price up to 50% lower, Vietnamese catfish are edging Chinese tilapia imports out of large western markets.
Worse yet, many Vietnam producers have also commenced tilapia cultivation –and they are on the same exponential export growth once enjoyed by Chinese producers. From no tilapia exports in 2011, Vietnam shipped 1,585 tonnes in 2012, 4,659 tonnes in 2013, 25,000 tonnes in 2014 and possibly 40,000 tonnes in 2015.
Alongside Vietnamese competition, Egypt, Myanmar, Bangladesh and Indonesia are all undergoing rapid tilapia farming growth. Up to now, they have mostly satisfied their domestic market consumption. Eventually, some of these nations will undergo the same rapid export—driven expansion that China and Vietnam did. All this mirrors the situation in Chinese shrimp lines, which are also being displaced by lower cost rivals based in India, Vietnam and Ecuador.
Chinese tilapia's trade prospects look especially bleak in America, which is its largest importer, absorbing up to half of exports. Latin American nations such as Guatemala, Honduras and Ecuador are poised to rapidly boost output. They intend to ramp up tilapia production –while leveraging their much lower shipping costs to North America.
Hence, Vietnamese whitefish may be China's nemesis today, competitive pressure from a new wave of even lower cost producers is destined to greatly intensify. Moreover, with a reputation for high antibiotic levels, western NGOs constantly advise consumers to avoid eating tilapia imported from China.
Fortunately, Chinese tilapia's longterm fundamentals, while challenged overseas, are hardly weak: Market observers conclude that tilapia production will peak and level off somewhere near 2 million tonnes. With a 1.4 billion population and fast rising seafood consumption, producers can substitute domestic consumption in place of exports over the next decade.
The good news is that with so much pent up demand, China has several decades of rapid aquaculture consumption growth ahead. This makes it unusual: Normally, a large market grows the most slowly but China's seafood market is both the world's biggest, and expected to grow at a 3% to 5% annual rate all the way up to 2040.
The bad news is that such optimism is no longer true of Chinese aquaculture's supply side fundamentals. Coastal fish farming regions were fully developed two decades ago. With even the scope for finding areas suitable for establishing new inland fish farms dwindling, longterm output growth is constrained to 1.5% to 2.5% annually, depending on the seafood line in question.

In retrospect, no sooner did China become the world's top seafood supplier than demographics and nature started moving it towards net importer status. Preliminary 2015 trade statistics imply that the past year is seeing the start of new, secular trade trends.
Recessionary economic conditions made the value of 2015's seafood exports fall by 2.2%, to US$8.9 billion, but exports fell by a far sharper 6.3%, to US$20.33 billion. However, while China remains a net seafood exporter by value, by volume, it is (as the above graph shows) a large net importer. Over time, its volume trade deficit will grow and sometime during the 2020s, it will became a net seafood importer by value too.
Eventually, the exhaustion of China's aquaculture resource inputs will put it in a similar position to America's oil industry, which was once the world largest oil exporter and is still its top producer: China is destined to remain the world's leading seafood producer, the top consumer of aquaculture products, but also their largest importer and market trend setter. Over the next decade, as it turns into a net seafood importer, its influence over certain seafood lines will rival the influence it exerts over markets such as soy and fishmeal.