Under the motto "Green on the outside, greener on the inside," the team - based at their head office in Borris, County Carlow, Ireland - are working on a suite of environmentally-friendly initiatives, with one of these being showcased at AgriTechnica in Hannover, Germany this week.

For more than 35 years, KEENAN diet feeders, known for their lower power requirement, have been delivering superior results on-farm, helping farmers to increase feed efficiency; producing more milk and beef from less feed. KEENAN recognises the importance of continued investment in green R&D to help reduce the carbon footprint of itself and its customers.

The Carbon Trust has validated KEENAN machines as the first environmentally-sustainable diet feeder in the world, proven to reduce methane emissions on-farm. Having investigated the output from the KEENAN diet feeder and reviewed the data from the KEENAN controller, the Carbon Trust established that the machines can increase rumen efficiency by delivering feed that is more easily digestible for cattle. This means that less energy is required and produced by each animal.

Due to the continued shortage of farm labour, KEENAN understands that many of the machines of the future will also require autonomous capabilities. The company has collaborated with tractor manufacturer Acres Machinery to develop a range of KEENAN feeders that can easily work alongside with a new diesel-to-electric, fully autonomous tractor.

An early prototype KEENAN e345 with a proprietary attachment and drive system is on display at the KEENAN stand at AgriTechnica (Hall 25, Stand E05). The range of electric-ready KEENAN feeders is due to be commercially available from 2021. 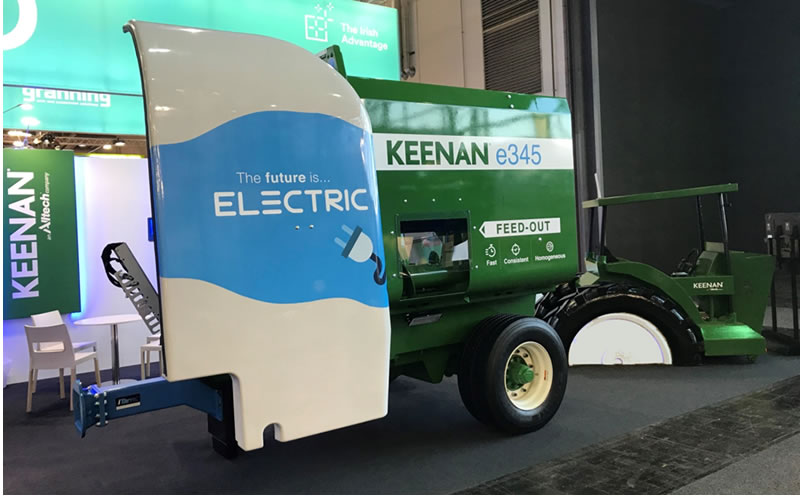