Intensive production of the white leg shrimp, Litopenaeus vannamei (Boone 1931), in Central America and SE Asia is estimated with 3 million t in 2015 (GOAL, 2015). Despite remarkable progress in shrimp nutrition and feed formulation during the past years, disease outbreaks in shrimp ponds can still lead to farming setbacks and increased use of antibiotics. Growing awareness from consumers and producers of aquaculture species, however, has driven demand for responsible and sustainable aquaculture. Regulatory authorities in most exporting countries now focus on the misuse of antibiotic growth promoters (AGP) in aquaculture, while public attention has shifted towards sustainable production methods. Alternative additives are being developed to replace the AGP's.

Acidifiers are one of various alternatives spearheading environmental friendly and nutritive-sustainable aquaculture approaches.

Currently the most widely tested organic acid molecule in aquaculture is potassium diformate (KDF). It has been tested and used successfully, among others, in salmon, trout, tilapia, Asian and European sea bass and Pangasius. Its value to the shrimp production cycle has also been demonstrated in several field and research trials. Potassium diformate is a double-salt formic acid molecule which decreases gastro-intestinal pH and thereby intensifies release of buffering fluids, containing enzymes, from the hepato-pancreas. Formate also diffuses into pathogenic bacteria inside the digestive tract and acidifies their metabolism, leading to bacterial cell death. Furthermore, beneficial bacteria (Lactobacilli, Bifidobacteria) are supported (eubiosis), which may lead to improved gut health, resulting in stronger condition of the shrimp.

One of the most crucial periods in the life cycle of shrimp is the post larval stage, when shrimp feeding are changed from algae and brine shrimp nauplii, to commercially formulated larval diets.  Survival rates during this period are critical to later productivity. Pathogenic bacteria can dramatically increase mortality in the shrimp hatchery. The use of potassium diformate was therefore tested during this production stage (He et al., 2006). The group supplied post-larvae of Vannamei, with a body mass of 57 mg, with a formulated diet containing either no or 0.8% potassium diformate (KDF, Aquaform®, ADDCON), for a period of 40 days. Shrimp larvae fed with KDF improved performance dramatically (Table 1).

Shrimp larvae fed with KDF inclusion showed a more efficient growth and significantly improved  feed utilization, as well as lower mortality (P<0.05), compared to control shrimps: leading to a markedly increased productivity index, which is a formula including the three most important production figures in shrimp production (weight gain of shrimp, feed efficiency and survival rate).

As discussed previously, optimised nutrition in the early stage of the shrimp production cycle often leads to an overall improved shrimp productivity. This was demonstrated in another experiment, reported by Jintasataporn et al. (2011). The aim of the following aquaria-simulated intensive grow-out trial was to investigate the growth performance of juvenile white-leg shrimp fed with low levels of dietary KDF vs. a control diet. For a 10 week experiment, 30 aquaria of 120 litres each, connected to a flow-through system, were filled with 20 ppt sea water of 28.0±2.0 °C containing >6.0 ppm of dissolved oxygen. The aquaria were stocked with 18 white leg shrimp each, averaging 2.4±0.1 g (n=540) of individual body weight. While the control diet did not contain KDF, 0.2% and 0.5% KDF were added to 2 treatment diets, respectively. Shrimp were fed to satiation three times a day, with a commercial diet containing 32% crude protein.

Table 2:   Performance of white-leg shrimp fed with or without dietary KDF

If the data are analysed for overall productivity, using the Productivity Index, it shows that inclusion of KDF resulted in significant improvements of the PI against the negative control by more than 19% or 24%, respectively.

Experiments carried out under controlled laboratory conditions, like the one reported above, showed unusually high survival rates (76-81%), and thus were not "mimicking" bacterial situations on commercial farms closely enough. Survival rates that do not reflect those found on farm often give an unrealistic picture of the additive's benefit. Under commercial farm conditions, shrimp can be exposed to a number of different challenges, including bacterial pathogens.

A subsequent trial was therefore carried out to challenge juvenile white-leg shrimp with the bioluminescent Gram negative bacteria V. harveyi, which regularly causes increased mortality in shrimp culture (Kühlmann et al., 2011). The trial consisted of a negative control, which was compared against two treatment groups (0.2% and 0.5% KDF, dosages similar to the ones used in the trial reported previously). A total of ninety shrimp (thirty shrimp per group), with a mean body weight of 11.0±0.8g, were used. The trial used the same facility as described above, however this time, the pathogen (Vibrio harveyi) was added to the water at the beginning of the 10-day trial at a rate of 5 × 106 CFU/ml.

At the end of the challenge trial, mortality in the non-treated shrimp was significantly higher (P<0.01; 76.6±5.8%) compared to shrimp which had been fed with KDF at both inclusion levels (50.0±10.0% for both 0.2% and 0.5% KDF-dosage), as shown in Figure 1. The effect of the acidifier was clear from the first day of the trial, but the difference between treatment and control became more pronounced from day 4 onwards and remained significantly different till the end of the trial. Both dosages of KDF reduced the mortality in the challenged shrimp to the same extent by day 10. 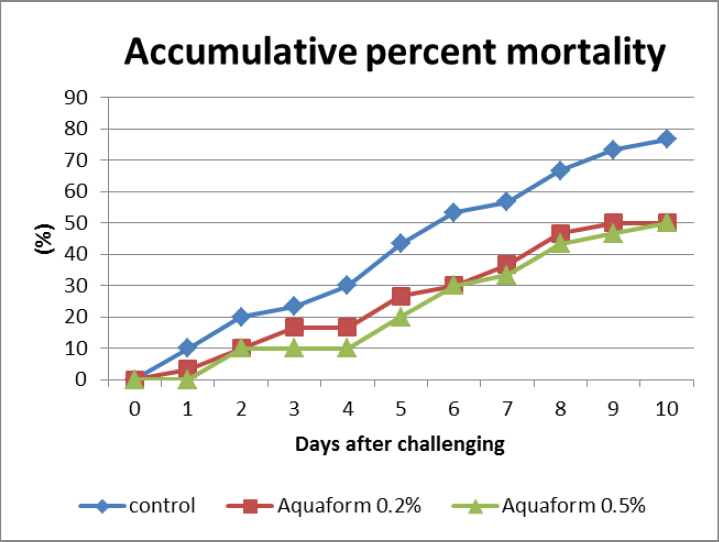 It can be concluded that dietary potassium diformate (AQUAFORM®) is able to reduce mortality in white-leg shrimp caused by the Gram negative pathogenic bacterium V. harveyi. It may be expected that similar results could be found with other Gram-negative bacterial pathogens in commercially reared shrimp. Subsequent trials in Ecuador (2016) had been able to quantify with Minimum Inhibitory Concentration (MIC)-tests the needed amount of potassium diformate to stop the growth of Vibrio harveyi and Vibrio parahaemolyticus. The needed dosage ranged from 3500 ppm for V. harveyi to 4500 ppm for V. parahaemolyticus, thus agreeing with the earlier trials from Thailand.

The impact of the diformate was furthermore assessed under ex-vivo conditions in Mexico (2017), in which bacterial growth of Vibrio spp., including V. parahaemolyticus, in haemolymph and hepatopancreas was determined. For this approach, shrimp were fed for several weeks either a control diet or a diet containing 3 kg /t potassium diformate. After that, haemolymph (HM) and hepatopancreas (HP) were analysed on bacteria content. The addition of dietary KDF led to a 100% reduction of Vibrio spp. in the haemolymph, while those bacteria were reduced by 85% in the hepatopancreas, as seen in the pictures below (Figure 2), therefore supporting the earlier antibacterial finding of the additive. 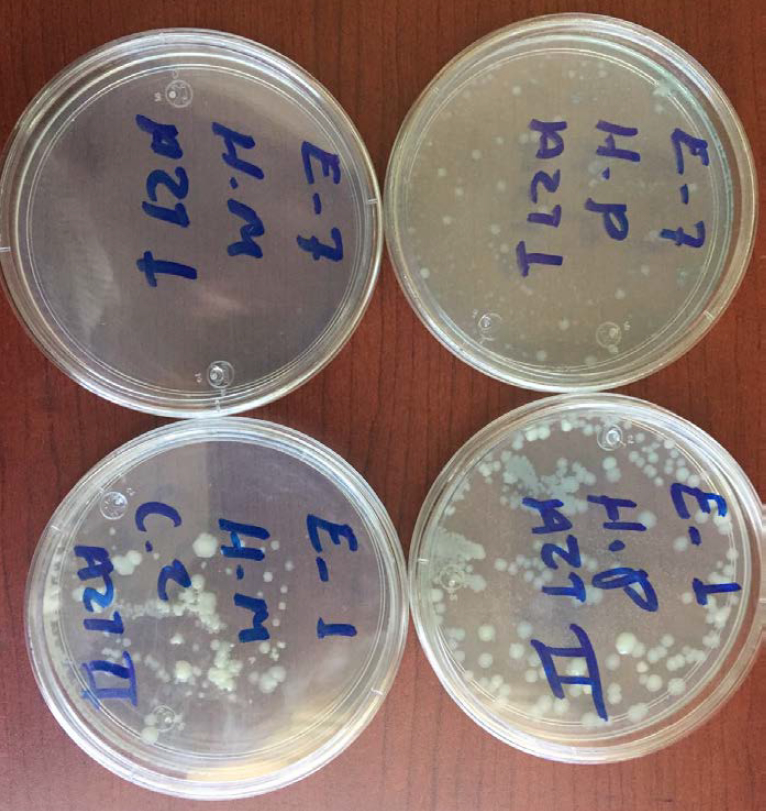 Finally, in view of the results on growth performance and survivability, it is safe to say that potassium diformate is a promising additive for economic and sustainable shrimp production and should be considered in compound feeds for shrimp under commercial "out-door" conditions. They furthermore suggest that AQUAFORM serves as a conditioner for infected shrimps, reducing mortality and leading therefore to improved profitability in the worldwide pond farm operation.

Article made possible through the contribution of Christian Lückstädt and ADDCON GmbH, Bitterfeld, Germany
Video >
Technical Paper >
Adisseo's holistic 3-Step approach to improve gut health in animals: Part I
Gut health is a multi-factorial topic, which can be described as symbiotic relationship among feed quality, gut function and microbiota, including feed digestion, mucosal and barri ...
Innovative approach of the gut health management by combining microbiota modulation and prevention of intestinal inflammation
Gut health is a multi-factorial and complex topic, depending on the environment, farm management, feed and housing changes. It is also probably the greatest concern for meat produc ...
6.5 million pigs successfully weaned with Vitazero by Agrimprove
With 100 tons of zinc saved and 6.5 million pigs successfully weaned with Vitazero, part of the 'Aim-4-Zero' approach, Agrimprove, pioneer feed mills and integrators are re ...