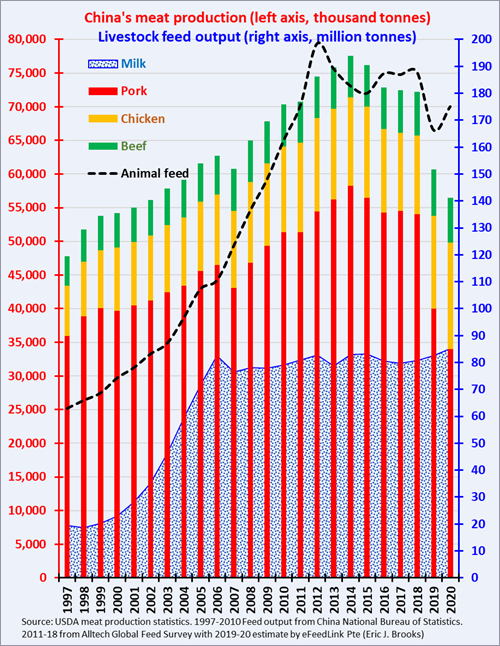 ASF has pushed far beyond China's borders to infect almost all neighboring East Asian countries to some extent. Japan, Thailand and South Korea have avoided serious losses but many of China's Southeast Asian neighbors have been devastated.
The damage ranges from a 16.4% decline in 2020 Philippine pork production to a 20% decline in Vietnam's swine meat output over two years to a far more catastrophic 37% decline in China itself. ASEAN nations including Myanmar, Laos and Cambodia are all known to have epidemics but their swine sectors are comparatively smaller and official statistics sketchier.
Below we examine ASF's impact on East Asian feed production by looking at three national markets that account for over 95% of swine sector losses –and the results are disturbing.
Based on statistics from eFeedLink's Livestock Tracker, in 2018 China's hog herd fluctuated between 460 and 490 million head, averaging for the year around 475 million. Opening at 463 million head in January 2019 and closing near an eFeedLink projected 180 million head. Hence, a stunning year-on-year inventory drop of 61% is projected entering January 2020.
China's rapidly falling hog inventories averaged for the year at approximately 310 million head, 35% below 2018's average national herd size. –But a 35% drop in average hog inventories does not result in a proportionate 35% fall in either pork production or hog feed consumption.
On one hand, the fact the steepest part of the inventory decline occurred in H1 2019 means that on its own, swine feed consumption will fall by more than this amount. On the other hand, to take advantage of high swine prices, many farms are maximizing returns by growing their smaller hog herds more than 20% above their average finishing weight.
At the same time, this 15% boost in feed intake per hog this implies is partly counterbalanced by the releasing of underweight pigs to market during the ASF epidemic's earlier stage.
We estimate that the speed of this year's herd decline and changes in grow out weight will reduce swine feed consumption by 37%. Consequently, we estimate China's hog feed production will decline from the Alltech Global Feed Survey estimate of 79 million tonnes in 2018 to approximately 50 million tonnes in 2019.
Going forward, eFeedLink September 2019 data shows that China's hog sector may be in for an early rebound: According to the October Livestock Tracker "With exceptionally high hog prices and returns offsetting the risk of ASF-induced losses, breeder farms were motivated to expand sow herds for the first time since ASF broke out a year ago."
This implies that if ASF is contained, China's hog herd could commence a new, rapid expansion phase starting in Q2 2020, shortly after post-Lunar New Year inventories bottom out.
–But even if closing 2020 hog inventories doubled from their 180 to 190 million and closed the year near 380 million head, next year's average hog inventory level will be in the 280 to 290 million head range. That will put average 2020 hog inventories about 8% below this year's mean level. With hog finishing weights expected to keep rising, swine feed consumption will fall by less, bottoming out during 2020 in the 47 to 49 million tonne range.
Thanks to The Substitution Effect, China's swine sector woes are a blessing for its poultry farmers: Consumers are eating cheaper chicken in place of pork. With bird flu not a problem for the first time in six years, high returns have stimulated broiler production.
From 2.0 billion head in August 2018 when ASF first broke out, broiler inventories jumped 12.5% and peaked at 2.25 billion birds in August of this year. With this year's average broiler inventory level of 2.2 billion, it is up 10%  from 2018's average flock size.
Alongside this inventory increase, higher grow out weights will boost chicken meat production up 18%. On the other hand, the ongoing substitution of more feed-efficient white feather broilers in place of native broilers means that broiler feed consumption is rising 17% from 44.2 million tonnes last year to 51.7 million tonnes in 2019
Dominating world duck consumption to the same extent it does that of swine, Chinese farmers are boosting production of this gamier meat when pork is in short supply. In its July 2019 annual Chinese poultry report, the USDA noted: "Duck production is mainly located in southern China, however, swine facilities in northern China that have been impacted by ASF are switching to some duck production. These facilities have retrofitted their pens to accommodate chicken and duck production."
As a result, duck production is rising 17% and is expected to exceed 7 million tonnes for the first time, with duck feed consumption rising 16%, to 11.6 million tonnes. –With 2019 hog feed production near 50 million tonnes and the combined output of broiler and duck feed exceeding 63 million tonnes, this is the first time that the quantity of feed used to make poultry meat exceeds the amount consumed by China's vast swine population.
Among Chinese poultry lines, only layers are seeing flat production and marginally lower feed consumption. This is because even though eggs are setting new price records, many farms sold their older but still productive hens to take advantage of extraordinarily high broiler prices.
The resulting 5% reduction in layer numbers over the past year and higher egg-laying productivity resulted in a 5.3% drop in 2019 layer feed production, from 26.4 million tonnes to 25 million tonnes. Layer feed output is expected to stay in the 25 to 26 million range in 2020 too.
With a slight rise in milk production offsetting a 3.3% decrease in beef production, bovine feed demand is staying steady at near 6 million tonnes. On the other hand, seeking to fill the void left by falling pork production, aqua feed output is rising by 2.2 million tonnes or 14%, from 2018's 15.7 million tonnes to 17.9 million tonnes in 2019. 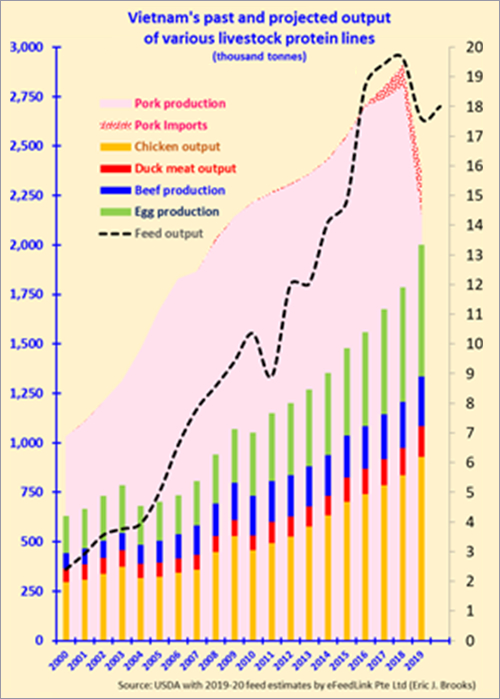 Just as the substitution and importation of meats cannot fully compensate for nosediving pork production, a large 29 million tonne fall in swine feed consumption of swine feed could not be fully counterbalanced by fast-rising output of broiler, duck and aqua feed.
From 189.7 million tonnes in 2018, we expect China's 2019 feed production to fall 11.5%, to 166.3 million tonnes. That is 16.7% below China's peak feed production of 198.3 million tonnes in 2012 and its lowest output since 2010.
Going forward, the collective increase in poultry and aqua feed production will more than offset 2020's much smaller 2% to 6% projected decline in swine feed consumption. As a result, 2020 will see a partial 6.9% recovery in Chinese feed output, to 177.8 million tonnes.
Both ASF's size and scale are less severe in neighboring East Asian nations. Sharing both a lengthy border with China and a historic preference for swine meat, ASF spread into Vietnam less than six months later. With ASF having spread to every Vietnamese province and swine production region, a steep fall in pork output is inevitable at this point.
In late July, Rabobank's Q3 Pork Quarterly estimated that as of early Q3 2019, 3.0 million hogs had been lost. The latest industry estimates project Vietnam's hog inventory falling by 22.2% or 6 million head, from 27 million at the start of 2019 to 21 million in early 2020, eventually bottoming out near 20 million head.
Consequently, pork output is expected to fall by 14.6% from 2.81 million tonnes in 2018 to a USDA estimated 2.4 million tonnes this year, then another 7.8% to 2.25 million tonnes in 2020. While severe, the cumulative 20% inventory drop is only a fraction of China's far steeper 61% decline –a 20 million tonne drop over two years.
With pork output falling roughly 20% or 561,000 tonnes over  two years and consumption by 481,000 tonnes or 17.1%, Vietnamese consumers are substituting cheaper less expensive proteins in place of pork.
We expect chicken meat output to increase a USDA estimated 10.2% (to 920,000 tonnes) in 2019, then another 5.4% to 970,000 tonnes in 2020. Similarly, duck meat output is rising by 11.5% (to 155,000 tonnes) in 2019 then another 5% to just over 162,000 tonnes in 2020. The output of eggs is expected to rise by 14.8% (to 666,000 tonnes) in 2020, then another 6% to 700,000 tonnes in 2020.
Because the increase in more feed-efficient poultry meat output not fully offset declining hog production, we can it to badly impact Vietnam's feed sector, which has been one of the world's fastest-growing. It expanded 11.9% annually from 2011 through 2018, based on Alltech Global Feed Survey figures. 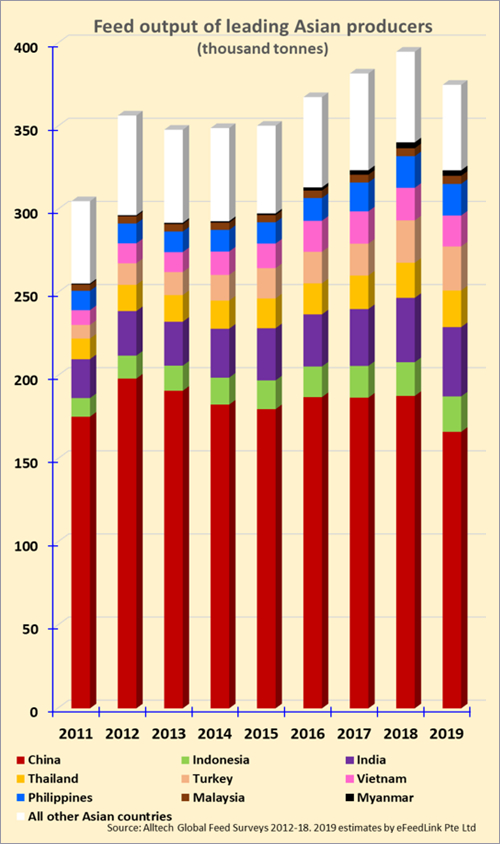