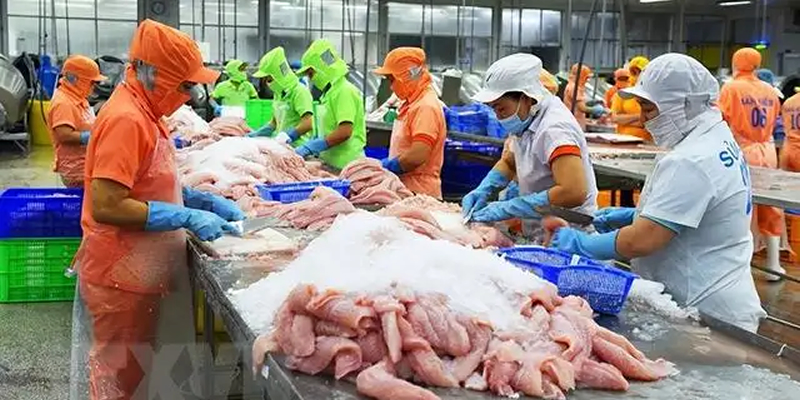 The Vietnam Association of Seafood Exporters and Producers (VASEP) said they can see that all food and seafood industries, including pangasius, have been severely impacted by inflation, even after the country's pangasius exports reached nearly US$2 billion in the first nine months of 2022, Fish Information & Services reported.

Despite being twice as high as in the same period of 2021, pangasius exports in September were at their lowest point of the year. It applies to all significant import markets.

Consumers with middle- or low-incomes are being severely impacted by inflation and currency devaluation, which is forcing them to restrict their spending. Even moderately priced food items like pangasius, which were formerly within the reach of the majority of consumers, experience a decline in demand as a result of inflation.

Even the Chinese market, which is thought to be the most optimistic market for Vietnam's pangasius businesses, showed signs of decline in the final months of the year. Although they saw a significant growth of 190% over the same period last year, Vietnam's pangasius exports to this market in September were lower than they were in August.

China imported pangasius from Vietnam in September 2022 worth US$49 million, a significant decrease from the US$64 million imported in August. Both frozen pangasius fillets and whole pangasius import demand decreased. By the third quarter of 2022, this market had nearly 30% of the value of Vietnam's pangasius exports, at nearly US$590 million, an increase of 111% from the same period the previous year.

With US$441 million in exports, pangasius fillets made up 75% of the total; the remaining 20% was frozen whole pangasius. The market's import demand is still very high and has nearly reached pre-pandemic levels, but importers are also being negatively impacted by the Renminbi's depreciation to a 30-year low against the US Dollar. When purchasing from abroad, they are also more cautious.

When US inflation is at its highest level in 40 years. The US Federal Reserve may continue to raise interest rates sharply in order to control inflation as prices in the country continue to rise sharply. This will cause the value of the dollar to fluctuate sharply, which will have an impact on international trade.

Despite a 41% increase in September, Vietnam's pangasius exports to the US were still lower than they were in August. Vietnam's pangasius imports to the US reached US$454 million by the end of the third quarter, an increase of 83% over the same period and accounting for 23%. Frozen pangasius fillets made up 96% of the market with US$437 million, frozen whole pangasius made up 2.2% of the market at nearly US$10 million, and the remaining 1.6% was value-added processed pangasius.

As for the EU market, fish prices have increased even though Christmas is next month. Previously inexpensive fish, like hake, is now 30% more expensive in supermarkets and fish markets. The cause was rife inflation, skyrocketing fuel and electricity prices, which directly impacted how much it cost to transport and store fish products. The demand for fish in the EU market, including pangasius, decreased further as the value of the Euro decreased to a 20-year low against the US dollar.

As a result, compared to August, pangasius exports to the EU decreased by US$3 million in September. By the end of September 2022, this market had imported pangasius from Vietnam worth nearly US$160 million, which was twice as much as it had done during the same period the previous year.

The UK is also affected by price inflation and rising energy costs because of the Russia-Ukraine conflict. With a strong recovery in the second quarter, Vietnam's pangasius exports to the UK in the first nine months of the year totaled nearly US$50 million, up 30% over the same period. However, pangasius imports fell in the third quarter.

It is predicted that pangasius exports in 2022 will still be able to reach about US$2.5 billion, a remarkable record for the Vietnam's pangasius industry, even though they may not be as strong as they were in the first few months of the year.