Partly from an interplay of market forces and natural resource constraints, partly from US and foreign government policies, America's powerful role in the world feed crop market is changing.
Many Americans still fondly think of their nation as "the world's breadbasket" but that title has long been out of date: The United States stopped being the world's primary wheat supplier because it invented something far more profitable.
Instead of supplying bread, 20th century America launched modern feed-based agribusiness –and started exporting the raw inputs other countries needed to make their own meat.
Nations such as South Korea and Japan grow less than 1% of the corn and soybeans needed to feed their livestock herds –and they are the norm. Fast-growing Southeast Asian nations need to import anywhere from 10% to 100% of their feed corn, soybeans and wheat. Moreover, the number of nations that import feed inputs and the proportion they must import is increasing all them.
For most of the 20th century, the world had only two types of nations: Australia, South America and a few European countries grew enough of their own feed crops to enjoy a high meat consumption level without resorting to importing.
But a vast majority of the world's nations were (and still are) incapable of growing enough feed corn and soybeans to sustain high meat consumption levels –and the United States supplied them with the feed corn and soybeans that allowed them to enjoy a high level of per capita protein consumption.
It did not matter if you ate a wagyu beef steak in Tokyo or scrambled eggs in Amsterdam: Chances are that Japanese cattle and Dutch layers were both raised on American corn and soybeans. For many decades, America supplied 65% to 75% of world corn exports and 80% to 90% of soybean exports.
In the late 20th century, several coincident factors finally broke America's near-monopoly over the world feed crop trade. First, having long settled all frontier regions, America had no more untapped arable land it could bring into production. Henceforth, future increases in US corn and soy harvest sizes would have to come purely from raising farm productivity, which usually means higher crop yields.
Second, after 1990, the "green revolution" petered out; for the past thirty years, crop yields have not kept up with meat demand.  Thereafter, to keep pace with growing world meat demand, frontier land would have to used for feed crop cultivation. America had no frontier cropland it could bring into production –but South America and Ukraine did.
Third, the exhaustion of unused US farmland faltering crop yield growth coincided with rapidly rising Asian meat demand. The latter accelerated when China's 1.3 billion population entered a two-decade spell of 10%+ annual growth, with Indian protein demand doing the same shortly thereafter.
Fourth, the late 1980s and 1990s not only brought faster Asian economic growth but saw new trade agreements with Japan, Mexico, Canada and South Korea that liberalized the importation of meat.
On one hand, a growing number of countries could either import feed and turn it into meat or import the meat directly from low-cost suppliers in North America, South America or Australia. On the other hand, led by the rapidly expanding Chinese economy, other nations opted to keep importing feed and to minimize meat import volumes.
Due to rapidly rising Asian meat production, it was easier to boost feed crop exports by bringing new Brazilian, Argentine and Ukrainian cropland into production than it was to try and "squeeze" higher yields out of mature, maxed out US farm acreage.
For example, after expanding by 3.5% annually from 1980 through 1999, post-2000 US soybean harvests increased by 1.3% annually –roughly equal to the increase in bean yields over the past two decades.
Relying on previously unused arable land being brought into production, the annual 2000 to 2020 increase in soybean output was 6.2% in Brazil, 3.5% in Argentina and 23.6% in Ukraine.

Consequently, post-2000, the 3.1% annual increase in US soybean exports could not keep pace with 8.8% Brazilian soybean export growth, 30.5% yearly growth in Ukraine bean shipments or 30.3% in Paraguay.
As a result, America's share of world soybean exports fell from 84% in both 1980 and 1990 to 51% in 2000, 44% in 2010 and a USDA projected 29% in the 2019-20 marketing year.
A similar story is told by corn, whose production in Latin America and Ukraine was stimulated by the same factors as soybeans –but with some important differences. Initially, America's share of world corn exports stayed in the 65% to 80% range right into the mid-2000s. It should thereafter have declined but not by as much as its share of world soybean markets.
Instead, it fell to 55% by 2010 and dipped to near 32% today. Curiously, after 2000 US soybean exports (+3.1%) kept growing but corn exports did not grow at all –and this happened even though US corn harvests (+1.7%) increased more rapidly than soybean production (+1.3%).
That's because politics altered the value-added equation for both corn and beans, though in very different ways. Not wanting to depend on America for its feed corn imports, China opted to import mass quantities of soybeans from a more diverse base of exporting nations. This meant that while rapidly growing Pacific Rim countries and China were both ramping up their bean imports, the latter did not import corn, leaving the golden grain at a long-term market disadvantage.
To help corn farmers and tame oil prices at the same time, the US government instituted a policy of substituting petroleum-based gasoline with corn-fermented ethanol. As a result, the quantity of corn diverted into ethanol production increased from 5% of the harvest or 15.9 million tonnes in 2000 (compared to 147.8 million tonnes used as feed) to 33% or 104 million tonnes in 2009.
Thereafter, the quantity of corn used fermented into ethanol leveled off until the mid-2010s, when E15 (15% ethanol fuel) was allowed for use in a larger number of vehicles. In the current 2019-20 marketing year, an estimated 43.5% or 152.4 million tonnes of corn will be fermented into ethanol, compared to 135 million tonnes used as feed.
On one hand, the reasons for the growing diversion of corn into ethanol production are obvious: It reduces US oil imports by up to 4 million barrels/day –and keeps many farmers from going broke: A recent study by Rabobank concluded that so long as "ethanol demand is crucial in supporting longterm corn prices", enabling corn to sell for up to US$1.50/bushel or 75% more than it would without biofuel production. 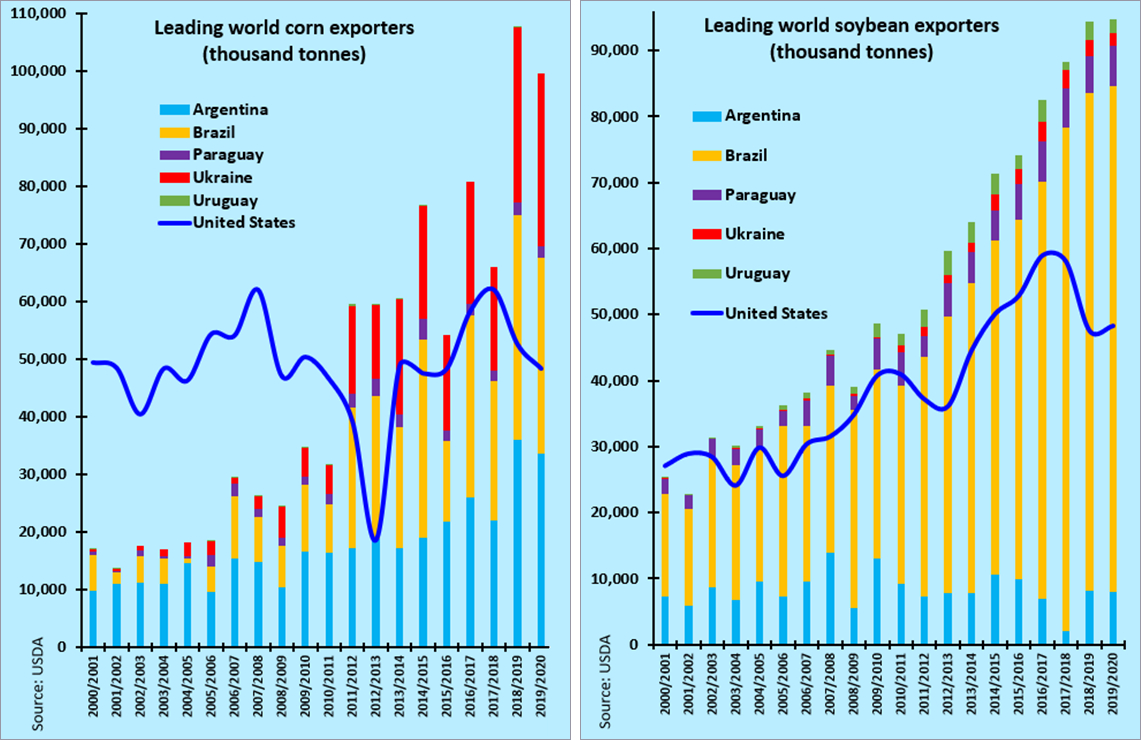 On the other hand, even though America grew 109 million tonnes more corn in 2019 than it did in 2000 and its livestock ate no more corn than they did at the turn of the century, exports are lower today than they were back then.
From 2000 through this year, world corn exports increased from 77 million tonnes in 2000-01 to a USDA estimated 167 million tonnes in the current marketing year –but the amount of corn annually diverted into US ethanol output since 2000 (136 million tonnes) greatly exceeds the amount by which all other nations increased their own exports!
US corn farmers are not complaining because the diversion of corn from exporting into ethanol production greatly increased both their return on corn growing and demand for it. Even so, America would be supplying over 60% of world corn exports instead of 32% if ethanol's production had not been mandated into existence.
Politics also derailed the trade performance of US soybean exports, which were increasing at a 2.1% annual rate after 2000 –until 2018, when the US-China trade war got them slapped with a 25% import duty. From 2000 through 2018, US soybean export grew from 49.3 million tonnes to 62 million tonnes only to fall back to a USDA estimated 48 million tonnes for the current marketing year.
–That's less than the volume of beans exported in 2000– and entirely due to trade war politics; with no ethanol-like revenue offset. Instead, US soybeans currently sell at a discount to Brazilian soy, whose price is kept higher by Chinese demand. With fewer exporting opportunities in the rest of the world than China, US soybean farmers face lower export sales compounded by a below-average selling price. 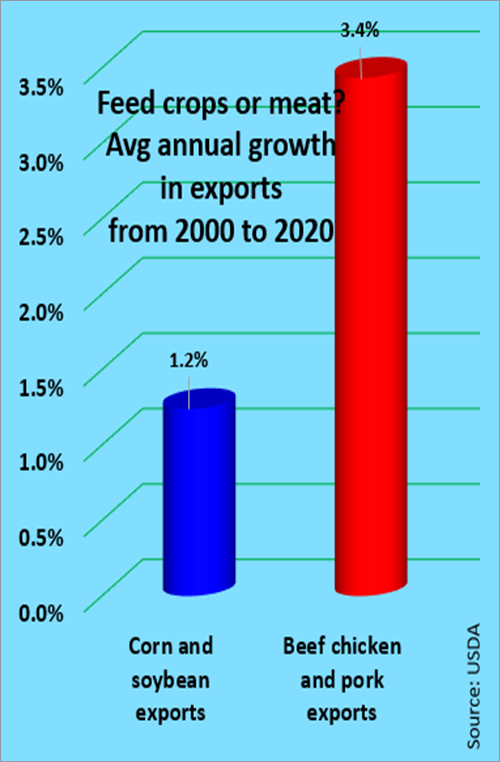 Even before the current trade war accelerated matters, America was on the way to becoming what Consiliagra founder Emily French called "the world's storage tank" for corn, soya beans and wheat. A buyer of last resort whose higher feed crop prices are offset by higher quality levels.
While this may sound like a depressing story, in truth it is not. Exports do not always create higher value-added than domestic processing. America's corn sector is not a declining industry; nor was it destroyed by foreign trade: That 150 million tonnes of corn currently being fermented into biofuel generates a significantly higher value-added revenue than it would by being exported. It also keeps corn prices at least $1 to $2/bushel higher than they would be if ethanol production were to suddenly stop.
The situation should have been better for soybeans but is worse. Thanks to China's punishing tariffs, America will export 10 to 15 million tonnes fewer soybeans and get up to 15% less revenue per tonne than otherwise would have. Nor is there an ethanol-like biofuel "safety valve" to replace the demand destroyed by lost soybean exports.
But even as feed crop exports transcended America's 19th century wheat exporter role, meat is replacing feed in US agribusiness revenue equations: From 2000-01 to 2019-20, combined corn and soybean exports increased at a mere 1.2% annual pace –but combined beef, pork and chicken exports rose nearly three times faster, at a 3.4% pace over these same two decades. Needless to say, it is far more profitable for American agribusiness to export feed that has been turned into meat than it is to ship raw inputs and let importing countries capture the meat value-added processing component.
In conclusion, despite the political maneuvering and hardships created by both the US government and foreign nations, US agribusiness is doing exactly the same thing it did during 19th century wheat exporting days and the 20th century's feed centric model: it continues to successfully shift its product export matrix to the products and processing steps that create the most value-added for its stakeholders.
With meat demand rising the most quickly in regions with the least arable land, the value-added equation will increasingly shift away from exporting feed grains to exporting meat. Aided by free trade agreements, the value proposition was already shifting from feed crop exports to protein products. The only question is to what extent should we let political and national security concerns alter the relative value-added propositions of feed, meat and biofuel.