November 4, 2020
COVID-19's impact on shrimp: Bad but could have been a lot worse
Flexible trade flows and resilient Southeast Asian output are keeping the output drop to around 20%, with potential for a rapid 2021 recovery and a new era of rapid, sustained growth.
By Eric J. Brooks
An eFeedLink Hot topic 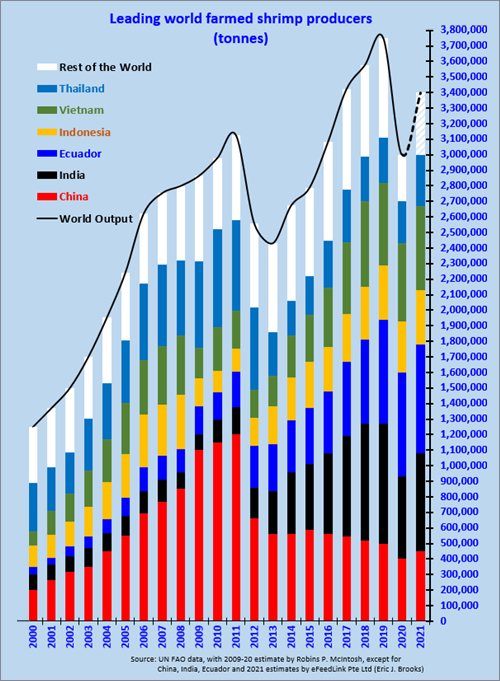 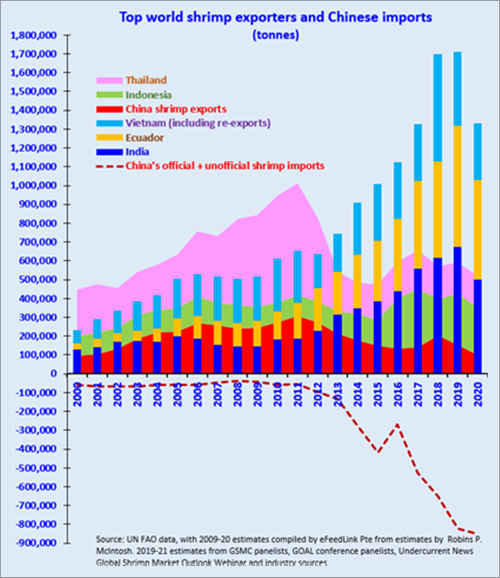 Ironically, shrimp farming avoid its worst case scenario because stagnant Southeast Asian output was surprisingly resilient in the face of COVID-19. Collectively supplying more shrimp than either India or Ecuador, Southeast Asian shrimp farming nations were minimally impacted by COVID-19. Compared to India, Ecuador, or western buyers, East Asian COVID-19 outbreaks were far less economically devastating. Demand-wise, most Southeast Asian shrimp exports are destined for China, Japan, and South Korea, whose shrimp demand was far less impacted than that of western nations.
Transport to nearby Asian buyers wasn't disrupted anywhere near the extent to which exports to America or Europe were. Less dependent on recession dented western markets, Southeast Asian producers never endured the mid-year trade disruptions suffered by Indian and Ecuadorian rivals.
Lockdowns delayed the East Asian 2020-21 shrimp growing season by up to two months. But with Thai based integrators supplying the region with broodstock, ASEAN shrimp never suffered the trade-related supply bottlenecks endured by its Indian competition.
Unlike India and Ecuador, Thailand (-3.5%, 280,000 tonnes output), Vietnam (-5.7%, 500,000) and Indonesia (-3.1%, 310,000) are minimally impacted. On one hand, 2020 ASEAN exports appear to be 'falling' from 1.25 million tonnes to around 1.05 million tonnes this year. On the other hand, most of this "fall" is due to China's crackdown on illegal shrimp smuggling. Consequently, Southeast Asian shrimp output fell by around 5%; exports by even less.
Going forward, the Q4 recovery momentum observed in India, Ecuador and Southeast Asia will extend into next year: We project 2021 world shrimp output rising 13.3%, to 3.4 million tonnes. Ecuador's low production costs and untapped resources ensures higher returns and faster expansion than any other producer.
We make one prediction: In 2021, Ecuador will overtake India, its output rebounding to 700,000 tonnes (compared to 660,000 tonnes for India). Whether this prediction is correct or erroneous will not change the fact that by 2025, Ecuador's abundant resource base will make it the world's largest shrimp grower and exporter.
Ecuador can enjoy 5 to 10 years of easy, rapid growth but we're not as certain about higher density, higher cost and resource-constrained Indian and Southeast Asian shrimp sectors. They will grow rapidly back to previous stocking density levels for several years –and then face an important question:
"Have they finally learned how to sustainably raise stocking densities significantly beyond pre-COVID-19 levels?" The answer will determine whether shrimp farming expands at a 4% to 6% rate in the 2020s –or endures another decade of frustrating stagnation.