Fat digestion in piglets: the importance of feeding the right fat

Fat digestion in piglets: the importance of feeding the right fat

Adding fats or oils to an animal diet provides the animal essential fatty acids which are needed for growth and production. The digestibility and effectiveness of the fatty acids can differ between sources and vary depending on the maturity of an animal.

Fat is, together with carbohydrates and protein, one of the main macronutrients (see article Gut health: Master the 3 masters in animal nutrition, 9 March 2017). Fats consist of fatty acids and glycerol that holds those together. Fat can be broken down into single fatty acids like protein breaks down into amino acids. The terms fat and oil are often confused. Basically oil normally refers to a fat with short or unsaturated fatty acids, which is liquid at room temperature whereas a fat is solid.

Figure 1. Example of the chemical structure of the fat.

Fat digestion starts in the small intestine through lipase from the pancreas. This process is supported by bile from the liver. We will examine the role of bile in more depth. Fats from feed often arrive undigested in the watery environment of the small intestine. As you will be aware, fats and water do not mix. Fats in the small intestine are in the form of large particles (like drops of oil floating on soup). This makes it difficult for the lipase enzyme to break down the fat; it can now only work actively on the outer layer of the large drops and is unable to penetrate the inside. This would make this process take too long.

Figure 2. Emulsification of a fat globule.

That's where bile comes into action. Bile salts break down large fat particles into a large number of very small particles. This process is called emulsifying. This significantly increases the total surface area of fat particles, enabling the lipase to achieve fat breakdown better and faster.

Substances that emulsify, like bile, are known as emulsifiers. Emulsifiers have a portion that mixes well with water (a hydrophilic portion) and a portion that mixes well with fat (a hydrophobic portion). With their hydrophobic portion, emulsifiers now form a layer around the small fat particles, with the hydrophilic portions pointing outwards. This has the effect that small emulsified fat particles 'dissolve' extremely well in the watery environment of the small intestine, and come into optimum contact with the lipase enzyme.

As explained, fats consist out of a basic glycerol molecule to which three fatty acids are linked.

These fatty acids can vary in length. The longer the fatty acids, the less digestible they are; they contain more energy but are more difficult to digest.

The various types of fatty acids are absorbed by the villi in different places;

·  Short chain fatty acids are absorbed at the base of the crypts between the villi.

·  Medium chain fatty acids are absorbed in the middle of the villi.

There are also research studies that refer to the inhibitory effect of medium chain fatty acids on bacteria in the intestines. Research has shown that they have antibacterial activity, as well as playing a role in gut development and the immune system. Given the pressure to reduce the use of antibiotics in agriculture, interest in MCFA has grown. MCFAs are known to have a inhibiting effect on common pathogens causing piglet diseases like E.coli, Streptococcus, Salmonella and Clostridium (Batovska, et al., 2009). They will also improve the intestinal morphology, including villi height, enhancing gut health.

Fat digestion is a process that depends on many factors. Three factors that directly determine the digestibility of fats are:

1.  Length of the fatty acid chains

3.  Size of the fat particles
Why fat digestion is more difficult for a piglet?
Sow milk consists for almost 40% out of fat (on dry matter basis). Since fats contains 2-3 times as much energy as carbohydrates (lactose), the fat in sow milk delivers most of the energy for a piglet. Fat in sow milk contains many relatively long chain saturated fatty acids; especially C16:0, however it also contains emulsifying proteins, that increase digestibility. These proteins thus compensate partly for the young piglet's as yet not optimum bile production, certainly where this concerns long chain fatty acids.
After weaning, the piglets still have dependence on these fatty acids (C16 and C18) as found in sow milk. But, because of the excellent digestibility they are also attracted to lipids with shorter chain fatty acids. Post-weaning the activity of the fat-splitting enzyme lipase is not yet up to speed in the immature intestinal tract of a young piglet. Around weaning, lipase activity is fairly low and starts to increase slowly from the 4th to 5th week. Moreover, bile production is still limited in young animals, making metabolisation of particularly the long chain amino acids more difficult.

Thereby the villi are damaged because of the impact of weaning, causing again a lower fat digestibility.

So, the ability to digest fat is depending on age and strongly influenced by gut health.

Piglets' immune systems are still developing and they are coming into contact with a wide variety of microbial challenges. Oils with short and medium chained fatty acids, like coconut oil, are therefore preferred to be used in a young animal diet, because of their excellent digestibility and anti-microbial factors. A high level of MCFAs is recommended due to weaning period being the time of greatest challenge. For mature animals, like sows, sources like soybean oil can easily be used, since they have the ability to digest longer fatty acids.

Bigolac is a high-quality energy source, containing protein, lactose and fat. It is used from the period around weaning and up to two weeks afterwards. Bigolac contains MCFAs, which are easier for piglets to digest and easily absorbed by the intestinal wall. These are absorbed well in the lower part of the villus and crypt, even in cases of villus atrophy. 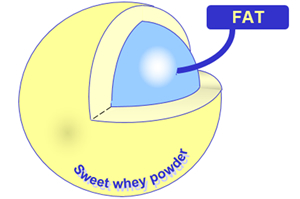 The fat in Bigolac is produced using spray-drying with sweet whey powder. This creates very small fat particles encapsulated in a protein layer, or in other words fat-filled whey. The main advantage of this is the small fat particles being more easily digestible to compensate for the low lipase production. And the fats are emulsified to compensate for the piglets' bile production. These characteristics, together with highly digestible protein and lactose, makes Bigolac a product of choice for young piglet diets to support gut health and premium pig performance.

For more of the article, please click here.
Article made possible through the contribution of Kelly Vermeer and Joosten
Video >
Technical Paper >
Raising the phytase podium
Phytate is the main storage form of phosphorus in all grains, which represent the basis of most plant-based diets used in animal production. To improve phosphorus availability and ...
Exogenous enzymes as zootechnical additives in animal feed: A review
Enzymes are widely used in the food industry. Their use as a supplement to the raw material for animal feed is a current research topic. Although there are several studies on the a ...
The evolution and application of enzymes in the animal feed industry: the role of data interpretation
Enzymes have been used commercially for nearly 40 years and save significant costs through sparing of expensive nutrients but the mechanism by which this is achieved is still debat ...