Global pig meat production is forecast to be slightly down 2% this year, compared with 2015, AHDB Pork reported, citing the latest estimate from the US Department of Agriculture's global outlook report.

Next year, however, it is predicted to register an increase, even above the 2015 level.

This year's fall is driven entirely by an anticipated 6% decline in production by the world's largest producer, China, to 51.9 million tonnes, the pork division of the UK Agriculture & Horticulture Development Board said. "The anticipated surge in production next year is also largely attributable to an expected expansion of 4% in China, following two years of decline, encouraged by the currently strong pig price".

The 6% fall in Chinese pig meat production this year apparently can't be compensated by production hikes in other major producers, which are forecast to make significant gains: Brazilian production is estimated to grow by 5% in 2016 and 3% in 2017, Russia by 6% this year and a further 5% next year and the US by 2% and 4% in 2016 and 2017, respectively.

In contrast, EU production is expected to remain stable over this time frame.

Export volumes for 2016, despite the expected 2% reduction in production, are forecast to increase 18% on 2015 levels to a record 8.5 million tonnes. A further 1% increase is anticipated in 2017. "China is once again a key driver of these movements, with import volumes more than doubling this year to 2.4 million tonnes, overtaking Japan as the world's largest buyer of imported pig meat", AHDB Pork said.

China is expected to remain as No. 1 pork exporter in 2017, although import volumes may fall back slightly as the domestic herd is seen to expand.

EU exports are also anticipated to be up 38% this year to 3.3 million tonnes before stabilising next year, while those from the US are predicted to increase 4% in both 2016 and 2017. Canadian exports are expected to show a short-term rise of 9% this year before declining 4% in 2017. 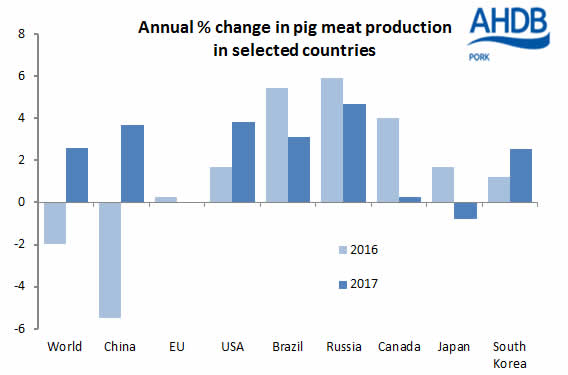