The company sold the largest amount of "fish-free" algal oil rich in EPA and DHA omega-3 and ARA (arachidonic acid) that meets the nutritional requirements of fish.

The F3 Fish Oil Challenge is a $200,000 prize to accelerate commercial-scale adoption of alternative feed ingredients that reduce the industry's reliance on wild-caught fish and help aquaculture to continue producing healthy seafood for consumers. 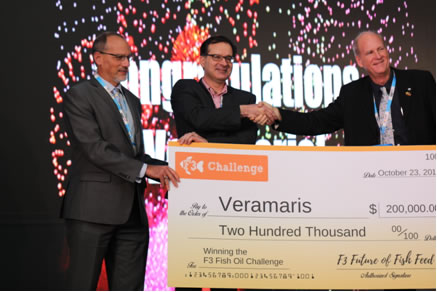 According to F3 calculations, the EPA, DHA, and ARA volumes sold by Veramaris are equivalent to nearly 90% of the two billion fish conserved through the challenge.

The Veramaris volumes were predominantly produced at two pilot facilities in Slovakia and the United States.

On July 10 this year, Veramaris opened its world-scale facility in Blair, Nebraska, US, to keep up with increasing demand for omega-3 EPA and DHA. The capacity at the Blair site can cover 15% of the global salmon aquaculture's need for these essential fatty acids that up until now were sourced from the oceans.

Industry leaders such as the world's largest salmon farmer Mowi, as well as Yuehai Feed Group and AlphaFeed have committed to trial Veramaris' winning algal oil, rich in omega-3 EPA and DHA – a testament to a strong commitment to sustainability, the company said.

"I have to thank those courageous leaders along the entire value chain for their collaboration and for taking significant steps to ensure a continued sustainable future for aquaculture", said Veramaris CEO Karim Kurmaly during the award ceremony at Global Aquaculture's Alliance GOAL conference in Chennai, India.

Veramaris, founded by DSM and Evonik, excels at providing the aquaculture industry a high-quality source of EPA, DHA, and ARA, thereby removing a bottleneck for future growth and performance of the entire industry.

The Future of Fish Feed was launched in 2015 as a collaborative effort by NGOs, researchers, and private partnerships to accelerate the commercialisation of aquaculture innovations to alleviate pressure on the oceans.