Feed intake - not only a measure for animal performance, but also for gut health

Feed intake - not only a measure for animal performance, but also for gut health
Adisseo

Undoubtably, weaning is the most stressful time in the life of a pig and associated with all sorts of negative impacts on the young pig. One of the most pronounced and easiest to measure impacts weaning can have on a pig is a markedly decreased feed intake after weaning, when the transition from sow's milk to a solid diet takes place. There are numerous factors affecting feed intake around weaning, which include creep feeding, age at weaning, the mixing of different litters exposing the piglets with unfamiliar companions in the pen, dietary factors such as nutrient level and balance and palatability of feed stuff, the physical form of the diets as well as feeding practices, water supply and quality, environmental factors and diseases or the immune activation status. When talking about a decrease in feed intake first of all, a decrease in performance springs to mind. However, the story is not as simple.

Effects of feed intake on gut health and function

Several studies have shown that a reduction in feed intake immediately after weaning may have negative effects on gut morphology and cause functional changes in the intestine. When feed intake is reduced the villi height is abruptly reduced, lowering the absorptive are of the gastro-intestinal tract. The shortening of the villi, hyperplasia of crypt cells and increased epithelial cell mitosis occurring also change the intestinal morphology in a way that leads to incomplete gut functions, resulting in a decrease in brush-border enzyme activity, which is seen as an indicator of maturation and the digestive capacity of the small intestine. When feed intake is low besides the decrease in villous height additionally an increase in paracellular transport can be seen indicating an impaired gut mucosal integrity. This leads to antigens likely to enter the lamina propria causing inflammation. A low feed intake furthermore results in the loss of the barrier function of the tight junctions, which indicates an insufficient luminal nutrient supply in order to maintain the barrier function. In summary it can be said, that a low feed intake represents a high risk factor for impaired structure and function of the gastro-intestinal tract, negatively affecting gut morphology and barrier function.

In general, it needs to be said, that the main goal in pig production must be to maximise feed intake in newly weaned pigs, to avoid gut health problems resulting in reduced performance and keep pig production economically feasible. However, thinking to start with the measures for prevention just at weaning is wrong. Preventing the drop in feed intake after weaning must already start in the farrowing room, not only with creep feed for the piglets for example, but also with managing the feed intake of the lactating sow.  Sows require sufficient feed during lactation in order to produce enough milk for the newborn litter and maintain body condition. Therefore, supplementing the sow's diet during lactation can improve performance of the sow and also her piglets. Adding flavor to the diets of lactating sows was proven to be effective in order to maintain a high feed intake during lactation. The high feed intake in turn guarantees a high milk production. Nevertheless, there also needs be focus on the piglets. One way to make sure piglets are meeting their nutritional needs is the use of milk replacer or more novel nutritionally enriched powders which are dissolved in drinking water. However, this method is for some producers not practical due to the extra amount of work load on the farm staff in the already busy environment of the farrowing rooms. The traditional approach to ensure the piglets meet their nutritional requirements and ease the negative effects of weaning on feed intake is feeding creep feed to the piglets in the farrowing pens in order to allow them to become familiar with solid feed before weaning. However, this method does not prevent the reduction in feed intake of piglets after weaning. There is also the strategy to feed diets containing high levels of milk by-products after weaning. This strategy has proven to be effective resulting in improved performance during this period. However, the addition of milk-by products after weaning may still not maximise the feed intake of the piglets to the full.

Feeding behavior in pigs is associated with genetics but is also based on learning processes of the pigs. In general pigs consume new feed cautiously in small amounts to avoid the possibility of eating something harmful. This process is known as feed neophobia. In general, piglets are able to learn their feeding from the sow, already in the prenatal stage but also in the postnatal stage. The piglets are in one pen with the sow in the farrowing rooms and are quite often exposed to feed spillage and the flavor of the sow's feed. Therefore, it might be assumed, that continuing with the same flavor in the feed fed to the weaning pig would result in a higher feed intake of the newly weaned pig as the flavor is already familiar to them. This effect is commonly referred to as sensory imprinting.

A study was conducted to investigate the effects of a flavor in diets of highly-prolific lactating sows on sensory imprinting effects on post-weaning performance of piglets when either fed a sweetener or a flavor like the sow received.

The study was set up as a 2 x 2 factorial designed experiment and treatments are illustrated in Figure 1. and are also described in Table 1. 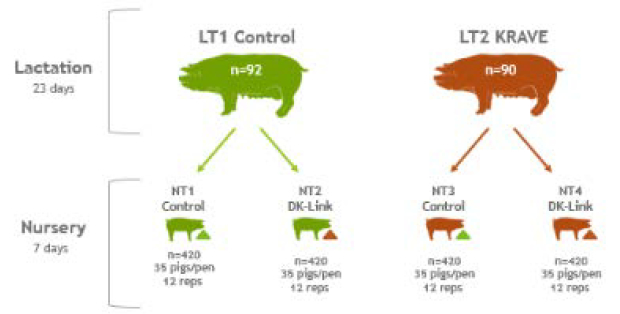 For the trial 182 high prolific sows at (average parity – 2.8) were randomly assigned to 2 replicates of 91 sows. Within each replicate, sows and litters were distributed in a factorial designed experiment among the 4 treatments shown in Figure 1. and Table 1. The duration of the treatment was for the entire lactation period for the sows. Cross-fostering was applied within the first 48 h after farrowing to standardize the litter size at 15 piglets. Diets were based on corn and soybean meal. The trial period for the piglets lasted from weaning to 7 days post-weaning. The individual piglet performance and the pen performance were recorded for the post-weaning period and are shown in Table 2.

The significant (P<0.05) interaction effects between the sow treatment and the piglet treatment found for average end weight, average daily gain and total feed intake of the individual piglet as well as for average end weight, average total gain and average total feed intake of the litters indicate that the feed regime of the sow has effects on the subsequent feeding behavior of the piglets post-weaning. 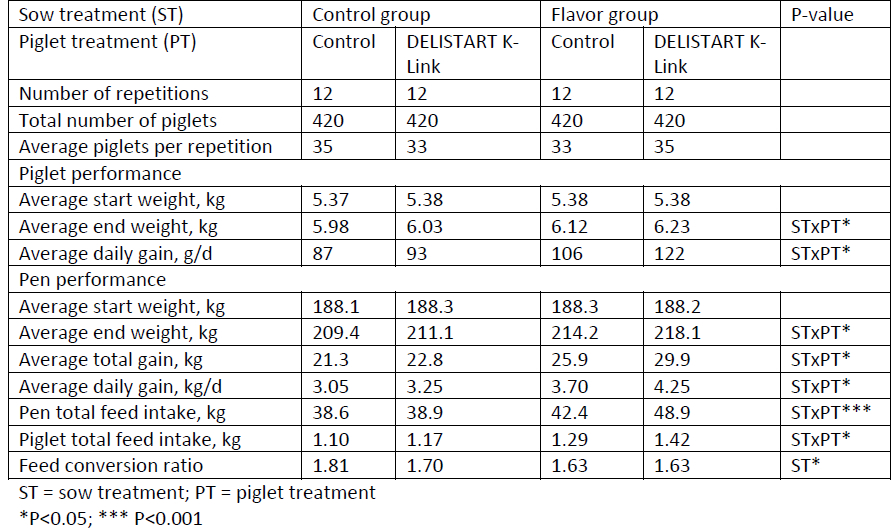 The trial clearly demonstrates that there was a carry-over or sensorial imprinting effect of feeding KRAVE™ to lactating sows on the performance of the litter. Findings also show, that the use of DELISTART K-Link had a positive effect on the performance of piglets.
For more of the article, please click here.
Article made possible through the contribution of Adisseo
Video >
Technical Paper >
Raising the phytase podium
Phytate is the main storage form of phosphorus in all grains, which represent the basis of most plant-based diets used in animal production. To improve phosphorus availability and ...
Exogenous enzymes as zootechnical additives in animal feed: A review
Enzymes are widely used in the food industry. Their use as a supplement to the raw material for animal feed is a current research topic. Although there are several studies on the a ...
The evolution and application of enzymes in the animal feed industry: the role of data interpretation
Enzymes have been used commercially for nearly 40 years and save significant costs through sparing of expensive nutrients but the mechanism by which this is achieved is still debat ...