Pathogenic bacteria invade their hosts through a variety of mechanisms. For certain pathogens, including those of veterinary importance, initiation of infection and disease progression is modulated by a process called quorum sensing (QS)1. QS involves the production, secretion and detection of diffusible signaling molecules or autoinducers in a cell density-dependent manner. At high cell densities, the autoinducers bind to the receptors on the cell surface or in the cytoplasm of pathogens and trigger a cellular response, including the production of toxins and other virulence factors, allowing host colonization and invasion (Figure 1, left).

Clostridium perfringens and Staphylococcus aureus are examples of animal pathogens that employ the accessory gene regulator (Agr) QS system to regulate the expression of virulence factors2,3. In S. aureus, alpha-toxin production and biofilm formation are tightly regulated by the Agr QS system3. These virulence factors can affect different livestock species (e.g., ruminants and poultry) and humans. They are deemed important determining factors for the onset and progression of bovine mastitis and epidermis lesion4. In C. perfringens, the Agr-like QS system controls the production of several toxins, including perfringolysin O, alpha-, beta-, epsilon-, beta2, and NetB toxins2,5. NetB toxin is of agricultural importance and is required for the onset and progression of necrotic enteritis, which is an intestinal condition characterized by inflammation of the intestinal walls of birds, leading to (at times) bloody diarrhea, secondary infection, morbidity and mortality2,6. QS of C. perfringens also modulates the production of alpha- and beta-toxins (C. perfringens Type A and C), responsible for enterocolitis in swine7. These toxins under the influence of QS can affect a wide range of hosts with different pathology and severity7.

Mechanism of fengycin as a quorum quenching molecule

A recent study showed that a Bacillus probiotic strain could produce fengycin, a cyclic antimicrobial peptide that inhibits signal detection by S. aureus8. Blocking of QS by fengycin reduced gut colonization and toxin production by S. aureus, leading to the complete elimination of the pathogen from a mouse model. A similar QS system (Agr-like) that is required for NetB production and host colonization is also present in C. perfringens2. As in S. aureus8, it is hypothesized that the fengycin produced by the Bacillus probiotic can interfere with the Agr-like QS system in C. perfringens by inhibiting the binding of autoinducers (i.e., AIP or autoinducing peptides) to the AgrC-like receptor (Figure 1, right). Reduced binding and interaction of AIP to the AgrC-like receptor diminishes the QS cascading effect, with a net effect of reduced ability to colonize and produce toxins. 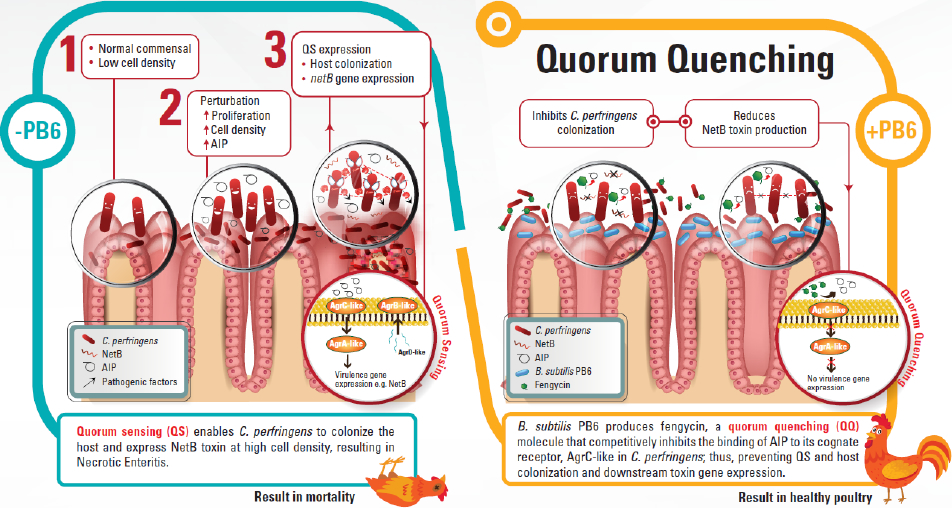 Figure 1.  The accessory gene regulatory (Agr)-like quorum-sensing system in Clostridium perfringens (left) and the fengycin-mediated quorum quenching (right) model. C. perfringens is a commensal with low cell density in healthy animals. Perturbation of the microbiota may lead to translocation and proliferation of C. perfringens in the small intestine. When reaching a high cell density, the Agr-like QS system is activated through the binding of the autoinducers (i.e., AIP or autoinducing peptides) to the AgrC-like receptor, which triggers downstream gene expression. QS enables C. perfringens to overexpress virulence genes and toxins for host colonization and invasion, resulting in necrotic enteritis. It is hypothesized that the probiotic B. subtilis PB6 produces fengycin, a quorum quenching molecule that competitively inhibits the binding of AIP to the AgrC-like receptor in C. perfringens. This abolishes QS activation in C. perfringens and the associated cascading effect.

Fengycin is a cyclic peptide (Figure 2, left) and is produced by B. subtilis PB6 (Figure 2, right), the latter marketed under the brand name of CLOSTAT™. Besides being a QQ molecule, fengycin is also known for its antifungal activity9, demonstrated in a diffusion assay using culture supernatant of B. subtilis PB6 against Aspergillus niger (Figure 3). Compared to mice fed with non-fengycin producing Bacillus, mice fed with fengycin-producing Bacillus strain had a significant reduction in gut colonization by S. aureus, thus demonstrating that fengycin can be produced in vivo by the Bacillus probiotic strain and acts to inhibit the QS of S. aureus8. QS in C. perfringens plays a role in adhesion, colonization and toxin production2. Disrupting the QS of C. perfringens can theoretically lead to reduced intestinal lesions and gut colonization by the avian pathogen. An animal trial was conducted to examine the effect of feed supplementation with B. subtilis PB6 on broilers challenged with Eimeria species, followed by C. perfringens (10^8 cfu/mL)10. Results showed that birds fed with B. subtilis PB6 had a significant reduction of intestinal lesions and reduced C. perfringens colonization. Some of these effects may be attributed to the in vivo production of antimicrobial peptides such as surfactin as well as quorum quenching molecule – fengycin. 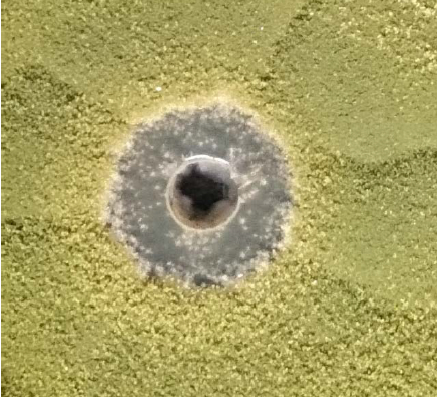 Intensive livestock production exposes animals to increased stress and the risk of a disease outbreak.  Reliance on antibiotics for healthy flock management and as growth promoters has been blamed for the promotion of antibiotic-resistant bacteria. QQ can be an alternative and effective way to prevent and reduce pathogenicity. Pathogenic bacteria often initiate colonization and infection through QS. It is possible to abolish pathogenicity by quenching the QS of the pathogen. With the new findings of fengycin being a QQ molecule that can lead to reduced infection, chicken producers f are now provided with an additional benefit and reason for using fengycin producing-Bacillus subtilis PB6 as a probiotic to manage healthy flocks.

In an attempt to develop an active microbial strain to inhibit C. perfringens, we have formulated CLOSTAT™ that contains a naturally occurring strain of B. subtilis PB6 that was isolated from the intestinal tract of a healthy chicken11. This patented proprietary strain, closely associated with the intestinal epithelium, was able to tolerate gastric and bile conditions. The B. subtilis PB6 strain in CLOSTAT™ is able to form spores, which provides a huge advantage in the strain's survival during pellet formation. This PB6 strain in CLOSTAT™ is found to secrete a group of peptides that, while inactive towards beneficial gut bacteria such as Lactobacillus and Bifidobacterium spp., are inhibitory towards common enteric pathogens such as C. perfringens, implicated in outbreaks of necrotic enteritis (NE) in broiler chickens10 and Campylobacter spp.11. Using LC/MS and Q-TOF analyses, the active metabolites have been found to possess a cyclic structure comprising seven amino acids, collectively known as surfactins (Figure 4). The mode of killing action is due to the ability of the surfactin molecules to form pores on the cell walls of the bacteria, as shown using electron microscopy (Figure 5). 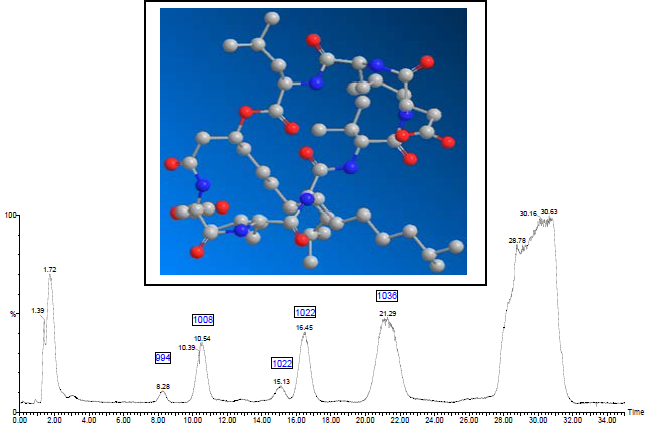 Figure 4.  LC-MS chromatogram of the extract of B. subtilis PB6 containing surfactins.

Figure 5.  The effect of B. subtilis PB6 in CLOSTAT™ on C. perfringens at 37 °C.  (a) Disruption of the cell wall and loss of cytoplasmic contents into the exterior after 1 hour; (b) Rupture and death of cell after 4 hours (transmission electron micrograph magnification: 29000 X).

Effect of CLOSTAT™ on birds induced with necrotic enteritis

The bactericidal effect of CLOSTAT™ against C. perfringens was demonstrated clearly in an in vivo 27-day broiler trial in which the condition of NE was experimentally induced. Birds were fed a corn-soya diet unsupplemented or supplemented with either bacitracin at 50 ppm or CLOSTAT™ at a dosage of 500g/t. All birds were orally inoculated with a mixed coccidial inoculum, except for the positive control group (nonmedicated/uninfected birds), followed by a broth culture of C. perfringens once daily for 3 days. The experimentally induced necrotic enteritis condition had a clear impact on the animal performance affecting feed intake, weight gain, feed conversion rate (FCR) and especially mortality (Table 1). In contrast, challenged birds receiving either antibiotic or CLOSTAT™ showed no significant difference in terms of weight gain and FCR to the unchallenged control group. It is of interest to note that the CLOSTAT™- treated birds had an even lower mortality rate than the birds receiving the antibiotic.

Effect of CLOSTAT™ on bird performance

When CLOSTAT™ was added to broilers raised under normal, unchallenged conditions and fed with a corn-soy diet12, 13, they showed significantly better weight gain and FCR compared to birds fed with unsupplemented feed or feed supplemented with a mixture of antibiotics as growth promoters (AGP) (Table 2).

The same observations were also seen in birds fed a wheat-based diet, where they registered a significantly better weight gain and feed conversion ratio than birds, which did not receive the B. subtilis PB6 strain (Table 3), suggesting CLOSTAT™ to be a suitable antibiotic growth promoter or AGP replacement.

Are all Bacillus subtilis equal?

Table 4.  Comparison trial of CLOSTAT™ with other Bacillus subtilis on the effect of dietary treatments on body weight and FCR (Day 1 – 42).

The development of a complex stable gastrointestinal microflora is important for health maintenance and disease avoidance in animals. Microorganisms as feed additives can have beneficial effects on animal health and performance. Establishing optimal conditions in the gut during particularly stressful periods in the growth of the animal is important to prevent various enteric disorders such as necrotic enteritis. While the gastrointestinal health of animals raised for food has relied very heavily on the use of antibiotics and other drugs in the recent past, the use of probiotics in feed represents a breakthrough in the total nutrition-based approach to animal health. By maintaining a state of eubiosis in the gastrointestinal tract, active beneficial microbial strains such as B. subtilis PB6 serve to improve the growth rate and feed utilization of poultry. Previous research had shown that when cells of B. subtilis were fed to experimental animals, the intestinal tract was recolonized by beneficial microorganisms such as Lactobacilli spp. Furthermore, the ingestion of Bacillus spp. has been reported to help restore the normal gut microflora following extensive antibiotic usage or illness.

B. subtilis PB6 (CLOSTAT™) is unique in the aspect that, besides being stable in bile and acid conditions, it also has the ability to inhibit C. perfringens, the causative agent of necrotic enteritis. The anticlostridial compound produced by B. subtilis PB6 is resistant to heat. The results from animal trials show that ileal populations of Clostridium spp. were significantly reduced in broilers supplemented with CLOSTAT™. B. subtilis PB6 also produces fengyin, a molecule that interferes with the cell-to-cell communication of C. perfringens, preventing the production of clostridial enteric toxins. In terms of growth performance, broilers in the CLOSTAT™ treatment group showed comparable or even better weight gain and feed conversion rate over those in the negative control and antibiotic control groups. Furthermore, the spore-forming property of B. subtilis PB6 is a huge advantage in their survival and application in the pelleted feed. Used in a post-antibiotic growth promoter (non-AGP) era for poultry, B. subtilis PB6, in particular, can help to ensure a balanced intestinal microflora and thereby reduce losses from sub-clinical clostridial infections and other enteric challenges.