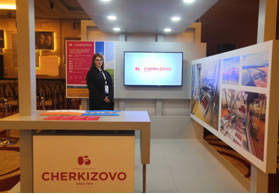 The company presented its own stand and confirmed intentions to export poultry products developed for Arabic countries.

Riyadh hosted the first Saudi-Russian CEO Forum, timed to coincide with the visit of Russian President Vladimir Putin to the Kingdom of Saudi Arabia. Organised by the Russian Direct Investment Fund and Saudi Center for International Strategic Partnerships, the forum was attended by about 300 Russian and Saudi companies and ministers from both countries. Russia was represented by Alexander Novak, Minister of Energy, and Dmitry Patrushev, Minister of Agriculture.

The event was designed to foster cooperation between major Russian and Saudi businesses in order to boost investments in a variety of sectors, including agriculture.

Cherkizovo Group was among nine Russian companies honoured to have a presentation stand at the forum.

"Saudi Arabia is of strategic importance to us as a major poultry market that relies on imports to meet more than 50% of its demand. For religious and cultural reasons, Saudi Arabia with its population of over 32 million people has a clear preference for poultry, with high levels of personal income across the nation underpinning demand for the highest quality and deep processing of products," said Andrei Terekhin, head of Cherkizovo Group's export department, who attended the forum.

The group is ready to supply its halal poultry to Saudi retailers, catering industry players, and meat processors.

Negotiations about the first exports are already underway with a number of Saudi companies.

"The forum confirmed that the Saudi poultry market can offer great prospects for Cherkizovo Group. Local companies demonstrated strong interest for a variety of ways of trade and investment cooperation with us as Russia's largest meat producer," said Terekhin.