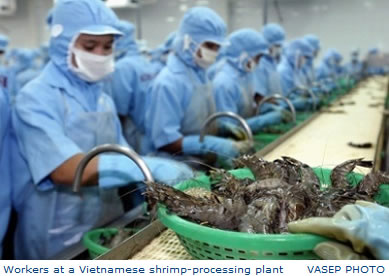 Vietnam's shrimp exports have sustained their growth, thanks to stable demand from major markets such as the US, the EU, China and South Korea, and the higher global shrimp price amid the decline in global shrimp supply.

Of the total shrimp exports, the proportion of whiteleg shrimp rose 10% to 60.4% due to rise in production and farming area, while those of black tiger and marine shrimps declined.

Sales of black tiger shrimp decreased 0.5% and accounted for 31.4% of total exports. The export value of processed whiteleg shrimp reported the largest increase at 12%, while canned marine shrimp showed the biggest drop at 66% with modest value of $1.8 million.

Vietnamese shrimp exports to the top five main markets in the first eight months increased except for Japan, which were down 6.4%. Exports to China showed the sharpest increase at 36.9%. The US was up 16.4%, South Korea, 13.5% and EU, 7.1%.

The US has remained as the largest importer of Vietnamese shrimp, and accounted for 22.5% of total exports in January-August, importing $435.3 million worth of shrimp. The import shrimp price into the US rose due to lower supply from India, Indonesia, Ecuador and Thailand. Demand for black tiger shrimp in the US increased in the context of lower supply from in India and Indonesia.

A decline in shrimp inventories in the EU made room for Vietnamese shrimp exports to the market. From January to August, shrimp sales to the EU hit $372 million, up 7.1% year-on-year. Exports to three key markets in the bloc posted positive growths, with the Netherlands posting the highest increase at 29%.

During the same eight-month period, the UK remained the biggest market for Vietnamese shrimp within the 28-nation bloc. Exports advanced 8.4%, with demand for warmwater shrimp expected to remain good this year.

Vietnamese shrimp exports in the remaining months are expected to slightly increase compared with the same period last year.