Mycotoxins are prevalent in nearly all feed grains worldwide. Produced by fungi in cereal grains, corn and corn byproducts such as distillers dried grains (DDGS), mycotoxins in feed cause a cascade of problems in poultry production. Managing these contaminants is essential to maintaining bird performance and overall operation profitability.

Mycotoxins directly damage cells in the digestive tract, particularly, shorten the intestinal villi in broilers and poults.1 Considering that poultry have relatively short intestinal tracts, this makes it difficult for birds to digest and absorb nutrients, leading to reduced growth and feed efficiency. Prolonged exposure can lead to systemic effects, such as reduced immune function, making birds more susceptible to bacterial pathogens, like E. coli and Salmonella.

Researchers have identified more than 400 different mycotoxins. It's important to realize that diets often contain more than one mycotoxin. Even if no individual mycotoxin is at a damaging threshold, the cumulative effect of multiple mycotoxins can depress immunity and cause performance losses.

Although it's possible to test for mycotoxins, the process can be costly and time consuming. During the time it takes to collect samples, send for analysis and get results back, birds may already be suffering the effects of mycotoxin damage. Or, while tests are being run, a new and undetected mycotoxin may have emerged in the feed, compromising productivity.

Testing also is problematic because it is difficult to get a truly representative sample. Feed storage systems may contain pockets of air or high moisture that foster localized mold growth.

Because of the high prevalence of mycotoxins worldwide, the best approach is to assume these contaminants are present in feed and incorporate routine management to protect your birds against their harmful effects.

Producers may rely on binders to counteract mycotoxins. However, these solutions aren't always effective against all types of mycotoxins. BG-MAX™ from Arm & Hammer Animal and Food Production offers technologies that protect intestinal cells from damage in combination with mycotoxin binders to make birds more resilient against harmful mycotoxin effects.

BG-MAX features Refined Functional Carbohydrates™ (RFC™) technologies, which work by preventing mycotoxins from being absorbed. By combining RFCs with a specially formulated bentonite binder,     BG-MAX inactivates common mycotoxins while also protecting the gut. In addition, beta 1,3/1,6 glucans and mannans present in BG-MAX can reverse immune suppression caused by mycotoxins, allowing the animal to protect itself against secondary pathogens. 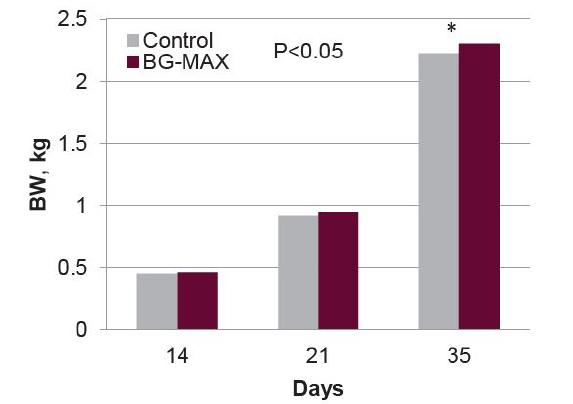 Birds fed BG-MAX in the diet also showed improvement in feed conversion ratio (FCR), although the differences were not statistically significant.

Feeding BG-MAX helps mitigate the effects of mycotoxins in feed by building bird resiliency against their harmful effects. For more information on BG-MAX and other ARM & HAMMER™ products, visit AHfoodchain.com.