Focus_Farmed salmon on trial: Deflation yes but did price fixing happen?
The first sustained Norwegian and Chilean supply growth in many years is deflating the market, but allegations of prior price fixing appear to be meritless.
By Eric J. Brooks
An eFeedLink Hot Topic 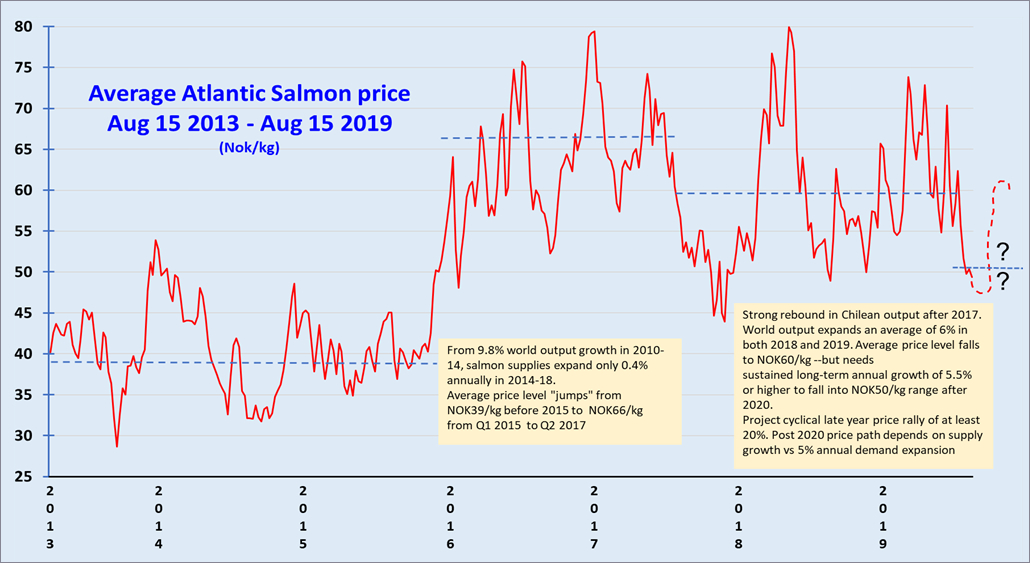 With an EU investigation into price-fixing followed by a billion-dollar lawsuit, the world salmon market has recently had an air of scandal about it. Six leading US salmon distributors jointly filed a lawsuit alleging damages from price-fixing against Norway based Mowi, Griegg, Bremnes Seashore, Salmar, Leroy, their North American subsidiaries and joint ventures.
They allege that when former top importer Russia banned the import of Norwegian, Scottish and Canadian salmon in 2014, prices immediately fell 10%. Russia accounted for 10% of Norway's salmon exports, with plaintiffs claiming the loss of Russia's market was never replaced by Norwegian salmon exports into other markets. They also allege Norwegian salmon industry associations co-operate to maximize revenues, though this is hardly shocking behavior on the part of any industry lobbying group.
Interestingly, their lawsuit coincides with a significant deflating of world salmon prices: In mid-June, they fell like a stone, dropping 13.9% in one week, from NOK70.6/kg (US$8.08) to NOK60.6/kg (US$5.93/kg). It then down trended further over the next month. By mid-August farmed Norwegian salmon averaged NOK49.4/kg (US$5.49/kg). That is a whopping 29% fall in two months and (due to the NOK's depreciation) a 32% decline in salmon's US dollar price. At slightly under NOK50/kg salmon is currently trading nearly 10% to 24% outside the NOK55-65/kg price band projected by Rabobank earlier this year. 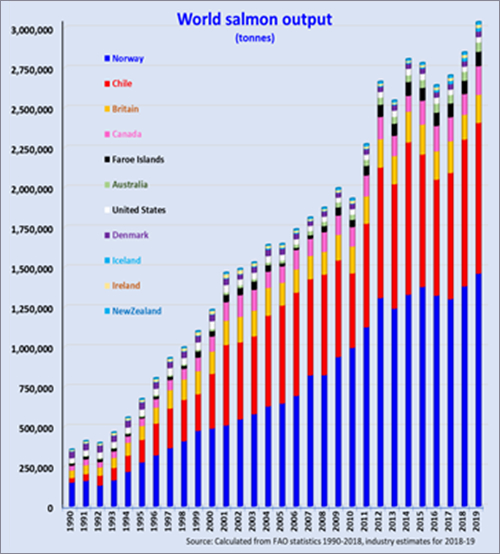 Is this more than a coincidence or is the lawsuit against Norwegian producers without merit? Our analysis of this situation implies that while the lawsuit's demand-side arguments have validity, supply-side issues deeply undermine their case for price fixing.
Over the short term, a 16.4% rise in Chilean production (to 921,000 tonnes) and 6.1% increase in Norway's output (to 1.380 million tonnes) offset a 22% drop in British output,  making for a 5.4% global farmed salmon production in 2018, to approximately 2.85 million tonnes.
For 2019, a strong recovery 4.8% rise in Norwegian output (to 1.46 million tonnes) and government-restrained 2.6% rise in Chile's production (to 945,000 tonnes) will drive an even larger 6.7% increase in world farmed salmon output, to 3.038 million tonnes. Given annual demand growth of up to 5%, two years of near 6% average output increases explains the current spell of soft salmon prices. Can such natural market fluctuations also refute recent allegations of price fixing?
On one hand, farmed salmon production expanded 7.7% annually from 1990 through 2019 inclusive against average annual demand growth of 5%. On the other hand, the past three decades have seen volatile growth rate fluctuations, decelerating expansion rates and a reversal in cost trends.
Attached graphs show that over these past three decades, for the first fifteen years ending in 2005, salmon output greatly outraced demand growth. While prices (adjusted for inflation) declined steadily over this time, rising productivity and low feed prices allowed unit costs to fall in tandem, making for healthy returns.
On the other hand, the fifteen years since 2004 have been a completely different story. On one hand, Norwegian output grew 54% from 2005 through 2010, from 646,000 to 945,000 tonnes. On the other hand, after nearly catching up to Norwegian output, Chile's salmon production encountered serious disease outbreak issues. From 2005 onwards it stayed range-bound between 600,000 and 650,000 tonnes, before crashing to below 420,000 tonnes in 2010.
Growing only 3.2% annually in the five years up to 2010 (versus 5% to 6% demand growth), world salmon supply fell behind demand for the first time. By the late 2000s, this flattened out a long-term trend of gradually falling salmon prices. On the supply side, five years of feed price hyperinflation from 2005 through 2012 halted a four-decade downtrend in unit production costs.

After 2010, a strong four-year recovery in Chilean production coincided with the opening up of Norway's last frontier salmon farming areas. That made for 9.8% annual growth in world farmed salmon production from 2010 through 2014 –and a final era of low prices. Russia's 2014 boycott of Norwegian salmon occurred at the tail end of this growth boom. The impact on world salmon prices was neutralized by two factors.

First, Russia got around its 2014 boycott of Norwegian salmon by substituting Chilean imports in its place. Consequently, rather than reduce world salmon demand, Russia's banning of European supplies changed trade flows: More Chilean salmon was exported to Russia. In the rest of the world, Norwegian salmon replaced Chilean supplies redirected to Russia.
Second, after peaking at 955,000 tonnes in 2014, Chilean output succumbed to a combination of disease outbreaks, food safety allegations of antibiotic overuse, algal blooms and bad weather. Its 29% fall to 676,000 tonnes over two years, coincided with the post-2010 exhaustion of Norwegian frontier regions.
By 2016 world salmon demand was 10% higher than in 2014 but production was 7.7% lower than it was two years earlier. Nor was this a temporary trend: From 2014 through 2018, demand kept growing 5% yearly while world salmon output fell at a 0.4% pace. –This wide gap between demand growth and supplies lifted salmon prices to record levels without any need for price fixing behavior on the part of industry stakeholders.
Coincidentally, salmon's powerful demand-pull inflation described above was complemented by strong cost-push momentum. After falling from NOK50/kg in the mid-1980s to NOK19/kg by the mid-2000s, Norwegian unit production cost increased 84% in thirteen years, to NOK22/kg by 2012, NOK31/kg by 2015 and NOK35/kg by 2018 –even after subtracting the inflation rate, the production cost jumped 65% in real terms.
A 2018 report by DNB Bank stated: "Together with an increase in feed prices, challenges related to sea lice have been the main cause for the increase in cost per kg over the last few years." During the ongoing 37% Chilean production recovery, finishing weights increased from 4.3kg in 2013 to 5.2kg in 2018 –by comparison Norway's sea lice-stricken salmon weights have fallen from 5.8kg in 2014 to 5.0kg in 2018.
The implicit deterioration in feed efficiency further inflated costs and constrained output. Challenged by a mounting number of stocking density related productivity issues, Norway achieved 1.3 million tonnes of output in 2012, then stagnated near this level for six years.
Against all these facts, the evidence is clear: After decades of 7%+ annual growth, world salmon production stayed almost unchanged from 2014 through 2017. Even the most conservative analysts estimate that despite record-high prices, salmon consumption is growing by more than 4% annually. If demand outracing supply was not enough, the past decade has seen a tremendous increase in the marginal cost of boosting salmon output beyond current levels. Production constraints and market forces explain the shocking rise in salmon prices; no co-ordinated "price fixing" behavior on the part of producers was ever necessary.
Going forward, the lack of new, a lack of new, natural salmon growing areas is made worse by an apparent inability to boost stocking densities. Industry experts concur that the only way forward is via the establishment of a new land-based recirculating aquaculture systems (RAS). Kontali expects up to 500,000 tonnes of salmon to be raised in such RAS environments by 2025 –but these will require heavy capital investments that will translate into high production costs.
Conclusion? Salmon's high prices are happening because in a world with finite salmon growing regions, demand keeps growing. Rising marginal costs are forcing producers to invest in costly RAS systems that do not take advantage of existing natural inputs. That will make salmon even more expensive in the future –without any need for price fixing.

Video >
Technical Paper >
Expert views on effectiveness, feasibility, and implementation of biosecurity measures for mitigating Tier 1 disease risks in the US swine, beef cattle, and dairy industries
Understanding disease transmission routes and implications for biosecurity is critical to mitigating livestock disease outbreaks and maintaining efficient and profitable production ...
Integrating feed preservation and gut health support to tackle Salmonella in animal production
Salmonella is a genus of gram-negative bacteria that is responsible for one of the most frequent global causes of food-borne diarrheal diseases in humans. As a zoonotic pathogen, i ...
Stalosan F contributes to reducing the risk of hernia
A Danish pig farm switched to antibiotics-free production, resulting in umbilical hernia occurring in 4% of the pigs. Consequently, the production strategy was altered: the iodine ...