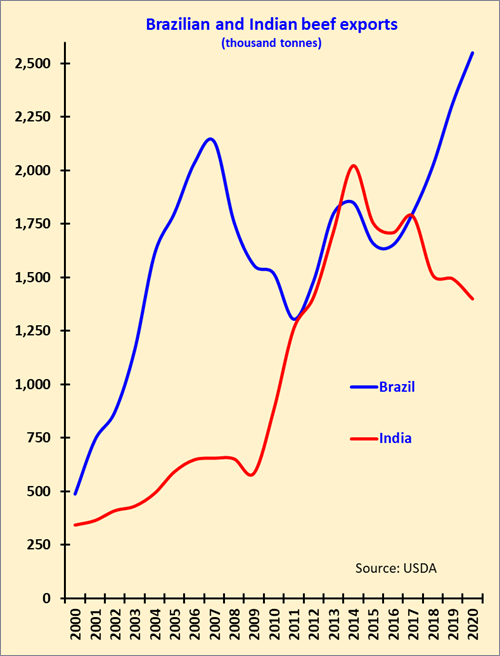 Brazil (374%, 2.43 million tonnes in 2019), India (334%, 1.49 million tonnes), and Paraguay (484%, 0.39 million tonnes) enjoyed the fastest 2000-19 cumulative export growth.
Only Argentina (4.1%, 0.76 million tonnes) enjoyed similar rapid growth – but this was a rebound from a 69% drop in exports over the previous decade. Argentina exported similarly large volumes of beef in the 1970s.
American and Australian beef was constrained by dry weather but India fell victim to politics. From 2000 through 2014 inclusive, Indian beef output grew 7.1% annually, from 1.53 million tonnes in 2000 to 4.0 million tonnes by 2014. Exports expanded at an aggressive 13.5% annual rate, from 0.34 million in 2000 tonnes to 2 million tonnes in 2014.
After 2014, the election of a religiously conservative government coincided with a dwindling increase in the number of male buffaloes eligible for slaughter. Increasingly restrictive laws on cattle slaughter and transport caused Indian beef output to rise at an incremental 1.5% rate since 2014.
With India's post-2014 domestic beef consumption rising at a 9% annual rate, beef exports have suffered, declining at a 6% annual rate. From 2 million tonnes in 2014, they fell to 1.49 million tonnes in 2019 and a USDA projected 1.40 million tonnes this year.
Whereas India fell victim to politics, Brazilian beef suffers from mostly self-inflicted wounds. Rising 8.5% annually over 20 years, Brazil's beef sector exceeded India both in export growth and volatility. It had output rising 5.1% annually and exports jumping at a 29.8% pace in 2000-05.
In the second half of the 2000s, food safety issues got Brazilian beef banned from the EU (which was its biggest market at the time). This was shortly followed by a global recession and domestic economic stagnation which dogs Brazil to this day.
Consequently, after peaking at 2 million tonnes in 2007, Brazilian exports fell 39% in four years to 1.31 million tonnes in 2011. New markets could not make up for the loss of EU sales, with Russia and Ukraine taking turns periodically closing their doors to Brazilian beef –and citing sanitary protocol violations.
China only rescued beef exports after 2015 and they did not exceed 2 million tonnes again until 2018. Even so, Brazilian beef exports to Russia, Ukraine, and most recently China continue to be hampered by similar food safety issues to the ones that got them banned by the EU over a decade ago. A 2017 scandal saw Brazilian beef temporarily blocked from major importing nations. In 2018, falsified labels were discovered. All this does not hurt Brazilian beef's reputation and prompted the erection of trade barriers.
Thanks to China, Brazilian beef exports have grown 5.8% annually since 2015 but domestic consumption decelerated from 2.2%  yearly growth in the decade before 2010 to 0% since then. At 7.4 million tonnes, Brazil's USDA estimated beef consumption will be below the 7.6 million tonnes a smaller population ate in 2010. With only exports growing, Brazilian beef's annual growth rate fell from 5.7% in 2000-05 to just 1.2% in 2015-19.
Going forward, Brazil beef has more capacity to expand production and exports than any other nation – but it must improve its chronically lagging food safety record.