The difficulty in the mycotoxins detection in raw materials and feed, due to their heterogeneous distribution and their commonly low specific clinical manifestation, makes that many unknown problems are attributed to them. To end these "acts of faith" Adiveter has developed a method based on biomarkers which can detect mycotoxins and their metabolites in liver. This system allows a reliable diagnosis of the problem, keep a continuous control over the situation on farms and objectively assess the real effectiveness that is taking mycotoxins adsorbents in each case.

Mycotoxins are toxic products arising from the natural metabolism of certain filamentous fungi produced under humidity and temperature favourable conditions. Since immemorial times are cause for great concern worldwide due to its harmful effects, both regarding food safety as well as animal feed. More than 300 toxic metabolites are known, but only a few are important in animal nutrition: aflatoxin B1, zearalenone, deoxynivalenol, fumonisin B1, ochratoxin A, T-2 toxin and HT-2 toxin.

The main exposure route to mycotoxins is oral, by contaminated food ingestion; however it can also be absorbed through skin and airway. Currently chronic mycotoxicosis, exposure to low or moderate mycotoxins concentration over a long period of time, is the most important and causative of large economic losses. Furthermore, the symptoms are hard to identify and relate to the presence of mycotoxins. In general the diseases that these substances produce on organisms are physiological changes that result in a decrease in growth, development and production. The unspecificity of clinical signs makes that they can be confused with other diseases and even it is common that the mycotoxicosis is confused with nutritional or management deficiencies.

The toxicity level will depend on the mycotoxins presence in the food, dose, exposure time, as well as the animal species, age, hormonal and nutritional status, among other factors (Bryden, 2012). Swine is considered one of the most sensitive to mycotoxins (Richard, 2007) (see Figure 1). 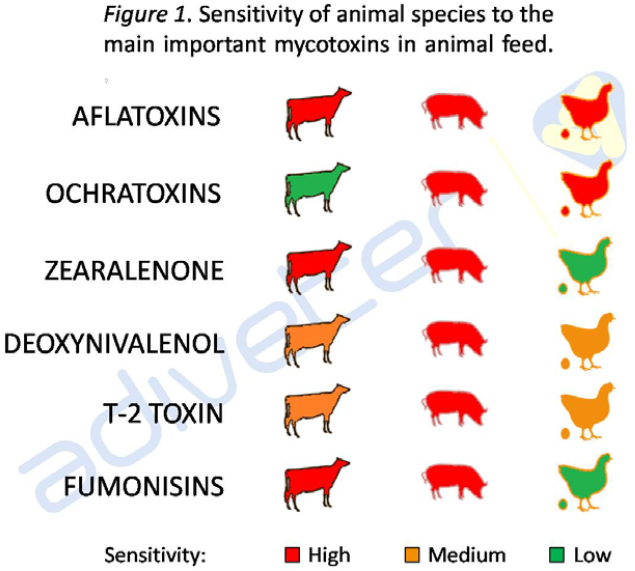 Once mycotoxins enter the body, as any xenobiotic, their toxicokinetics can be studied through the application of ADME system. According to this model we distinguish four stages: Absorption, Distribution, Metabolism or biotransformation and Excretion, which explain the phenomena experimented by a substance from entering the body until disposal (see Figure 2). The particularities of these stages for each mycotoxin justify the different toxicity degrees and sensibility of various animal species. 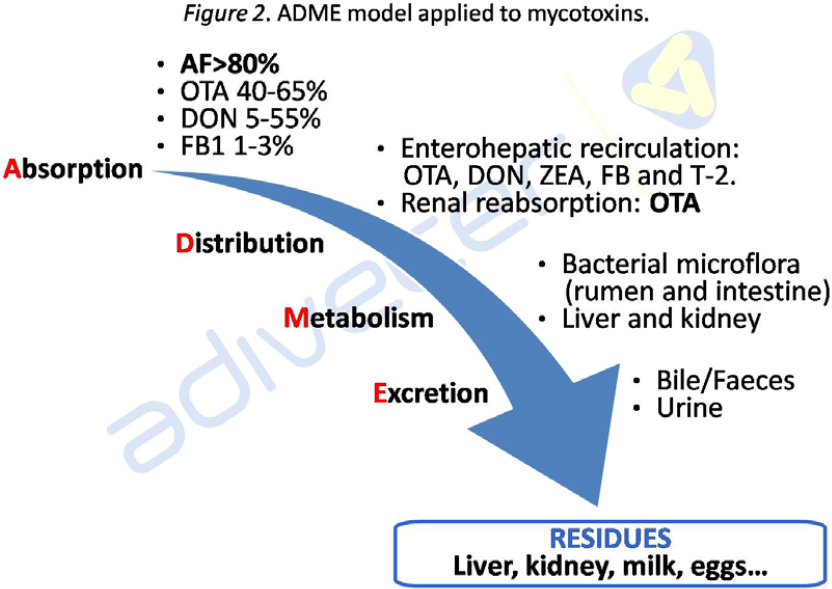 Absorption governs the entry of mycotoxins, the passage to blood and their distribution in the body. It takes place primarily at the digestive tract by passive diffusion, mycotoxins must cross the lipid bilayer (hydrophobic), and therefore the kinetic o absorption rate depends on the physicochemical characteristics of the mycotoxins and the concentration gradient between outside and inside. The more lipophilic the molecule is the easier will be to transport. In the case of aflatoxin B1 absorption is around 80%, however for fumonisin B1 does not exceed 3%.

The main distribution channel is the bloodstream, which is largely affected by the binding capacity of certain mycotoxins to plasma proteins (e.g. aflatoxin and ochratoxin A to serum albumin). On the other hand, can be given reabsorption processes through the enterohepatic circulation (via secretion biliary) or renal reabsorption (in the case of ochratoxin A). These processes extend the mycotoxins permanence in blood, favouring its absorption and therefore toxic development processes.

The metabolism itself or biotransformation is the modifying process which suffers mycotoxins in order to facilitate their elimination from the body. This modification may be performed by microorganisms at the gastrointestinal level or enzymes at the target organs level, such as liver and kidney.

In the case of ruminants, the rumen is the first line of defence against mycotoxins. Some rumen microorganisms play an important role because they are able to metabolize mycotoxins in less toxic compounds (OTA-α, deepoxy-deonivalenol, aflatoxicol, etc) or less permeable compounds and therefore less bioavailable (α-zeralenone).

Aflatoxin B1 is metabolized primarily in the liver by hepatic microsomal enzymes (enzymes of the family of cytochrome P-450). These enzymes convert AFB1 in their toxic form, carcinogenic form, AFB-8,9-epoxy, which can be covalently bound to DNA bases and serum albumin. AFB1 can also be oxidized giving rise to other metabolites, primarily AFM1 and AFQ1 hydroxylated forms, the AFP1 demethylated form and the aflatoxicol reduced (see Figure 3).

Finally, the efficacy in mycotoxins excretion, via urine and faeces, depends on the animal species and is directly related with the mycotoxins metabolisms. 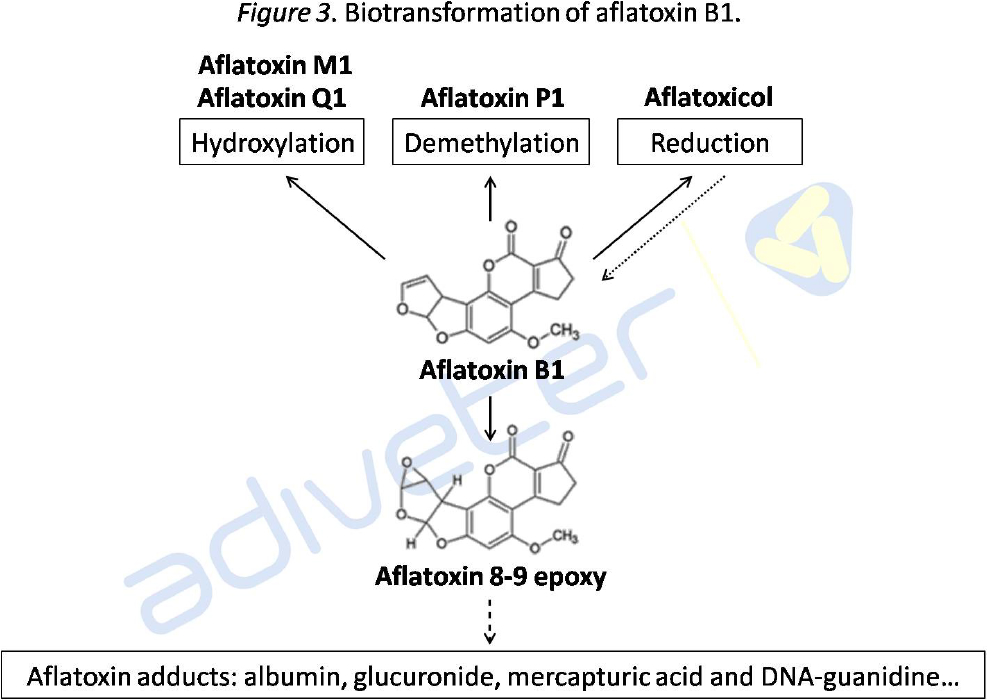 The study of biological markers is especially useful to provide information on exposure to xenobiotics, the effects produced or individual susceptibility. Biomarkers are defined as the cellular changes or alteration, biological or molecular that takes place in the tissues in response to a xenobiotic, in this case mycotoxins (Turner et al., 1999; Mayeux, 2004;. Garban et al, 2005; Baldwin et al, 2011; Silins and Högberg, 2011). To establish a biomarker requires a lot toxicology studies and an extensive validation in order to establish, for example, a relationship between a biomarker and the external dose or the disease degree. Based on the sequence of events that is produced from exposure to development of the disease, the biomarkers can be classified into three classes: biomarkers of exposure, effect or susceptibility (Committe on Biological Markers of the National Research Council, 1987) (see Figure 4). 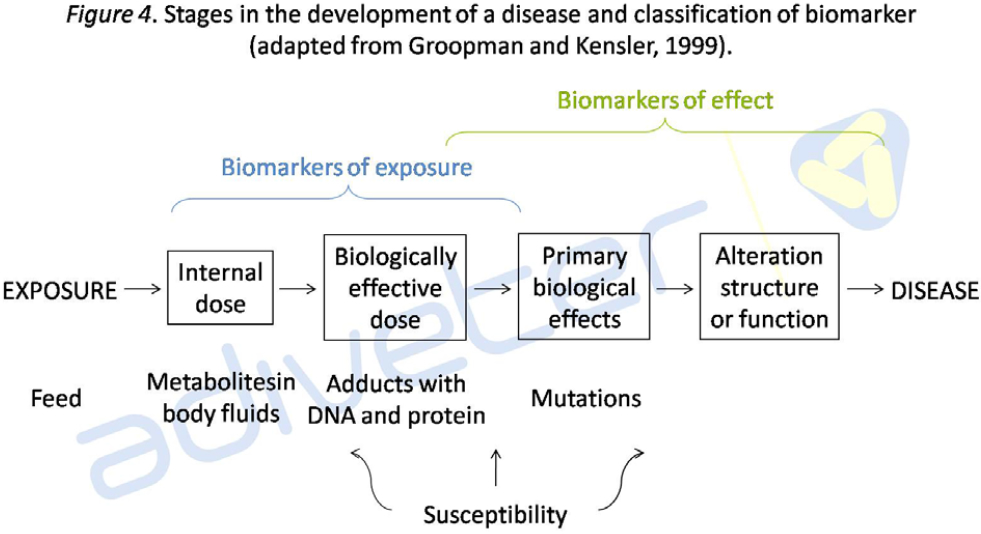 Biomarkers of exposure are specific, can be the mycotoxins itself or any of its metabolites and represent the internal dose (absorbed mycotoxins), while biomarkers of effect are generally nonspecific and represent structural or functional alterations produced in the body. However, these alterations may serve as biomarkers of exposure when both processes are directly linked (Groopman and Kensler, 1999; Perera and Weinstein, 2000; Silins and Högberg, 2011). The sphingolipids are directly related to regulating cellular processes. Given the high structural similarity between fumonisin and sphinganine (Sa) or sphingosine (So), the mycotoxin inhibits the acetylation causing an increase in the concentration of free sphinganine and in less degree free sphingosine, and a consequent decrease of sphingolipids, which triggers a series of processes that result in disease (see Figure 5). 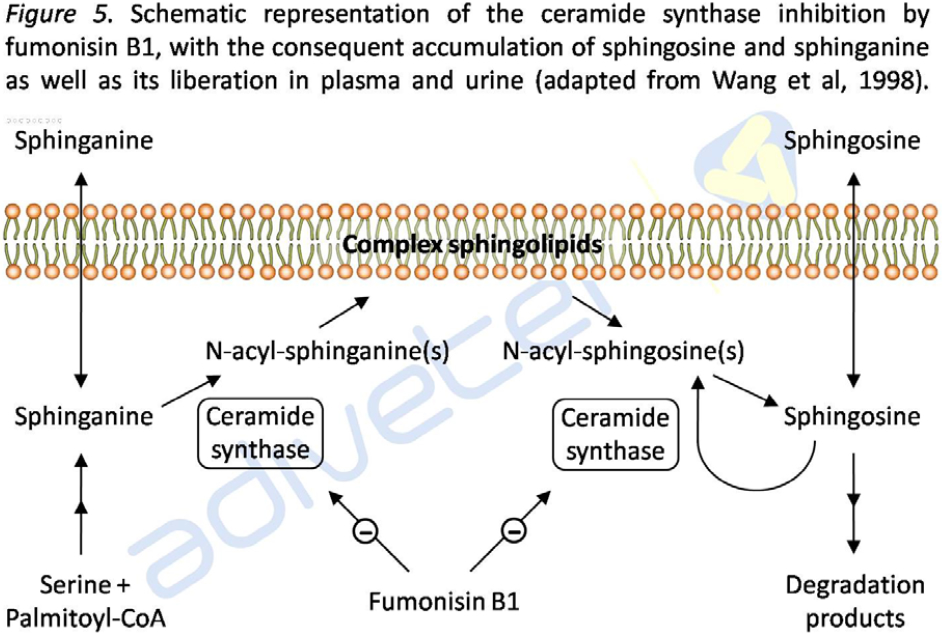 Biomarkers are beneficial to study the development of the disease as well as to contribute to the efforts carried out continuously in the monitoring and control of mycotoxins, because its early detection can provide management options to limit diseases and accumulation of mycotoxins (see Table 1). 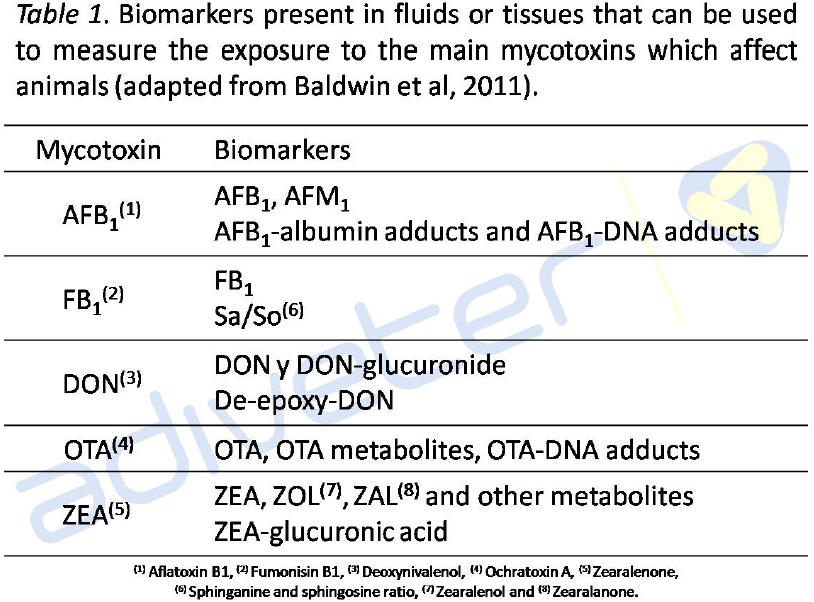 To the difficulty of a clinical diagnosis of mycotoxins is joined the difficulty to detect them in raw materials and feed, due to heterogeneous dispersion of mycotoxins on these substrates. The complexity is such that the legislation (Regulation nº 401/2006) requires taking a high number, such that unfeasible, of samples in order to "guarantee" their detection (see Table 2). 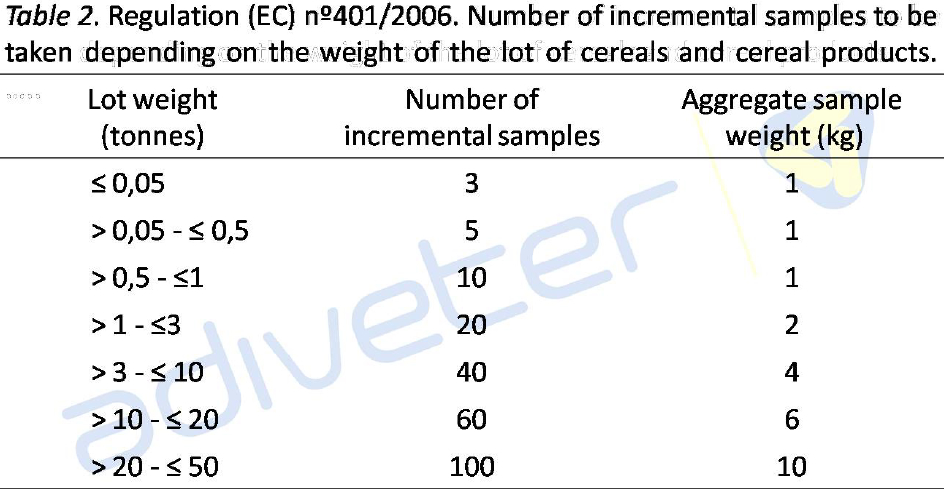 Adiveter has been using for 10 years biomarkers to measure the exposure of mycotoxins in order to develop its diagnostic capacity for the detection in field of mycotoxins. Based on this experience, Adiveter proposes a useful technique, sensible and effective which consists in analyzing mycotoxins and its metabolites in target organs (liver and kidney), obtained by necropsy in farm or at slaughterhouse.

The reliability of the method is more than proven, existing even legislation in some European countries on maximum limits of mycotoxins in organs (FAO, 2004). The result is a "radiography" of which mycotoxins are present on farms, which allows having an effective and specific control of every situation, identifying trends and preventing problems, besides being able to objectively assess the effectiveness of mycotoxins adsorbent used.

Video >
Technical Paper >
Effects of creep feed provision on behaviour and performance of piglets around weaning
Creep feed provision may ease weaning, hence we determined the impact of providing fibrous creep feed before weaning and adding this feed to the post-weaning diet on piglet behavio ...
The impact of early life nutrition and housing on growth and reproduction in dairy cattle
Contentious issues in calf rearing include milk feeding practices and single versus group housing. The current study was performed on a high producing 170 Holstein cow dairy farm, ...
Current challenges in young animal nutrition
Nothing shows positive impact on the liveability, health and growth of production animals and any operation's success, as early life nutrition does. What is fed to animals befo ...