Summary: Phytases are extensively used in broiler feeds as they increase amino acid and phosphorus availability during the digestive process, thereby improving growth performance. But can phytases keep up with the continuous demand for increasingly sustainable and cost-effective broiler production?

Broiler production has been continuously expanding to meet the growing global demand for chickens as a primary source of animal protein. To fulfil the nutritional needs of this progressively increasing industry, high-energy diets have been formulated using grains (corn or wheat) and soybean meals. Although these ingredients are rich in phosphorus, it is present in the form of phytate, which cannot be digested by monogastric animals such as broilers due to the low levels of endogenous phytase. This has triggered feed phosphorus supplementation in order to minimize carcass rejection and subsequent economic losses driven by skeletal deformities, bone fractures, and mortality. However, supplementing broiler feeds with inorganic phosphorus has a high cost, leading to reduced profitability, and excess phosphorus excretion.

The importance of a good start

Early development and growth are particularly fast in chicks. During this starter phase, large amounts of minerals are deposited in bones, especially phosphorus and calcium, but also magnesium, potassium, and zinc. It is vital that bone density increases swiftly to support rapid weight gain. Failure to deliver the key elements during the starter phase often has negative health and performance carryover effects during the following grower and finisher phases. To tackle developmental and performance concerns related to phosphorus deficiencies, phytases have been added to broilers' diets. By increasing phosphorus availability in the gut, phytases reduce the need for expensive inorganic phosphorus supplementation. Increased phosphorus digestibility also ensures a decrease in phosphorus load in manure, thereby reducing phosphorous contamination of soils as well as surface and groundwater. Phytases are also key in counteracting the antinutritional effects of phytate, particularly the removal of growth-impairing binding between phytate with protein and soluble calcium in the gut of poultry. Such benefits associated with the use of phytases have encouraged the further development of the enzyme options available in the market.

Phytase improves phytate breakdown but the extent of the enzymatic response largely depends on its concentration in feed and on the intrinsic properties of the phytase used. Distinct commercial phytases exhibit different biochemical and catalytic properties, which can lead to different results when added to broiler feeds. Enzymes with a superior profile in a low and wide pH range ensure that most phytate is hydrolysed and available in the early stages of digestion. A fast phytate hydrolysis in early intestinal tract contributes to minimize the antinutritional effects of phytate.

Phytases are continuously evolving to bring more value to broiler feed formulations and to cope with the demands of an ever-growing industry. From the first commercial phytase extracted from fungi to more effective microbial bacterial phytases, the journey to find new alternatives and to improve existing phytases continues with considerable breakthroughs. A novel phytase, Axtra® PHY GOLD, recorded remarkable results in releasing phosphorus in vitro and in vivo, particularly in the further improvement of broilers' feed use efficiency and in boosting growth performance in early life stages.

In vitro trials were conducted using five different phytases and evaluated the enzymatic activity over a range of pH. The broader the functional pH range the better, as it ensures superior bioefficacy in the different pH environments throughout the broiler's gut, including the very acidic early sections (gizzard and proventriculus). The recently developed phytase showed an improved pH profile when compared to competitors, performing better than all other phytases even at very low pH levels (>2) (Figure 1). Its thermostability and phosphorus releasing ability were also enhanced when compared to other phytases currently available in the market, thus anticipating the outcomes obtained in the in vivo tests. 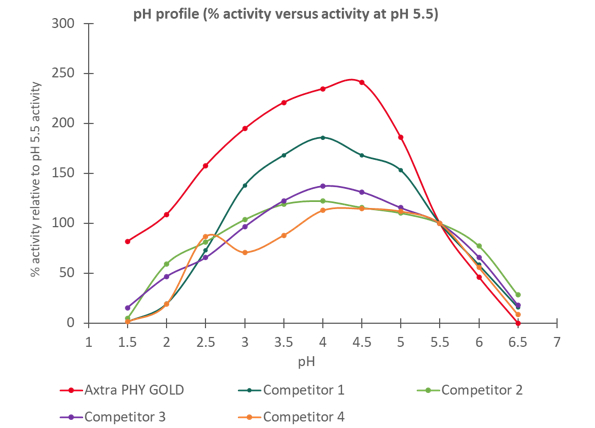 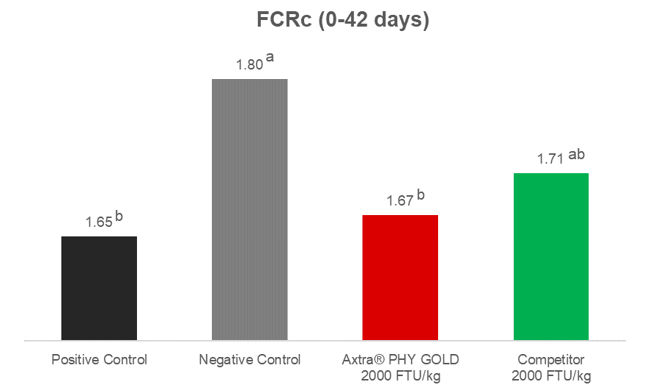 Phosphorus digestibility, an indicator of how successfully an enzyme can make phosphorus available, was also highest for the novel enzyme. The phytase was tested at different doses – 250, 500 or 1,000 FTU/kg[1] – and presented the best results for each and all of the supplementation concentrations, especially in the starter phase of broiler's development (Figure 3).

Figure 3 – Effect of increasing phytase doses from 250 to 1000 FTU/kg on ileal digestibility of phosphorus in young broilers.

At the top of the podium

Article made possible through the contribution of Dr. Yueming Dersjant-Li and Danisco Animal Nutrition – now part of IFF