A sustainable approach through combination of anti-inflammatory patented plant extracts, POWERJET, on gut health and piglet performance at weaning

A sustainable approach through combination of anti-inflammatory patented plant extracts, POWERJET®, on gut health and piglet performance at weaning

Feed transition, housing change, separation from mother and litter, physiological and immune variations are some of the great changes of weaning. Piglets are facing multi-factorial stresses in a short time. One of the most visible impacts of these stresses is the great decrease in feed intake after weaning. This drop in feed intake is likely to cause difficulties to cover growth requirements, due to reduction of the villosities height and thus nutrient absorption area, and to mobilisation of fat and muscle reserves. Besides these consequences, there are non-visible impacts at physiological and metabolic levels. Indeed weaning means first encounter between piglets and some raw materials. Consequently animals have to adapt their enzymatic system in order to digest these new raw materials, which is an important physiological change. As the first reaction of piglets' organism is to consider new feed as an antigen, they have also to adapt their immune system in order to accept this new feed. As 70 to 80% of the immune cells are located in the gut, this adaptation can generate local inflammation and oxidative stress. In contact with antigens, macrophages induce the production of pro-inflammatory and oxidative stress markers and this consumes a lot of energy and nutrients. To help animals coping with this stressful period, a combination of plant extracts named POWERJET® has been tested in a farm. These natural active ingredients have been selected for their anti-inflammatory and anti-oxidant properties. Former results have demonstrated the synergistic action between the three patented active molecules selected. One additional described property of these plant extracts is the modulation of intestinal motility which can be interesting to reduce diarrhoea disorders.

A university trial has been conducted in Beauvais, France, in order to assess the impact of the three plant extracts on both intestinal integrity and inflammatory process. Human colon cells have been cultivated and then stimulated with a severe model of inflammation (cytokines cocktail). The combination of the three plant extracts has been tested to evaluate their impact on Trans-Epithelial Electric Resistance (TEER) and Interleukins 8 secretion (IL-8). The TEER is an indicator of intestinal integrity. Highest is the TEER, well preserved tight junctions of intestinal cells are and will ensure a good absorption of nutrients. IL-8 are pro-inflammatory markers and their productions are reflecting the level of the inflammation. Results of this preliminary research are presented on the Figure 1 and Figure 2.

These results assess the interest of such a combination of 3 plant extracts on 2 important criteria:

- The preservation of intestinal integrity, avoiding the leaky gut syndrome

During the maternity period, a total of 77 sows (Youna genetic line) from 3 successive batches were divided into two groups: half of them were fed with POWERJET® 15 days before farrowing and during the whole lactation (21 days). The other half was fed without feed additive.

After weaning, 624 piglets from these 77 sows were followed during post-weaning period: half of them were fed with the plant extracts combination and the other half without feed additive. Four different groups of piglets were constituted depending on their own diet and depending on their mother's diet (Figure 3). POWERJET® was distributed to half of piglets from weaning (21 days of age) until the end of post-weaning period (67 days of age). Pre-starter feed was offered from 21 days until 42 days of age, and starter feed from 42 days until 67 days of age. All formulas were without antibiotics, zinc oxide nor acidifier and were distributed ad libitum. Data were subjected to analysis of variance. 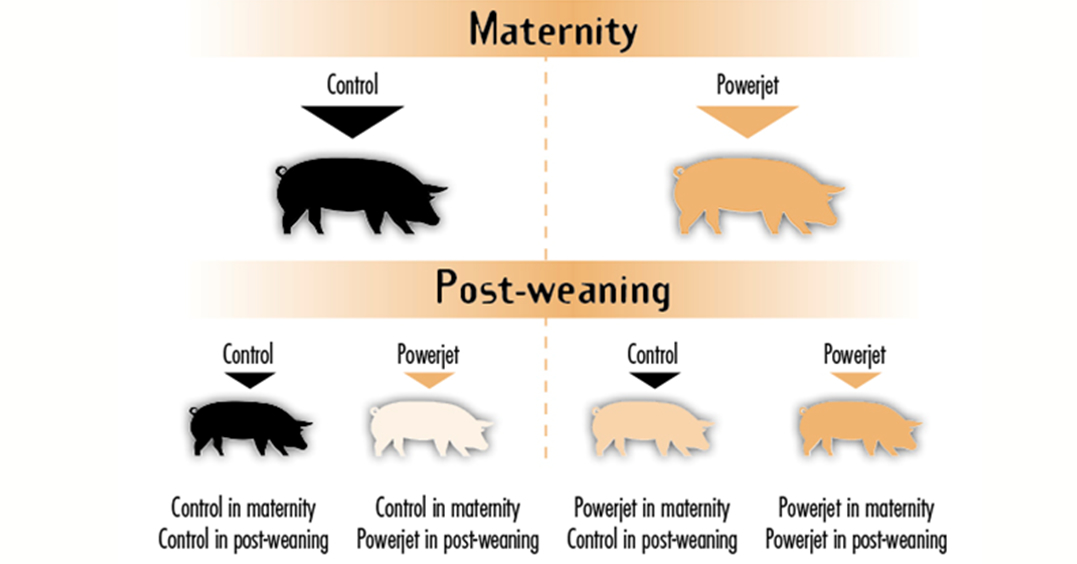 Results in maternity (from farrowing to weaning):

There was no significant impact of the plant extracts on sows and piglets weights (Figure 4).

The performance was evaluated for each piglets group coming from sows having been fed with or without POWERJET®.

Improvement of ADG was observed in the global post-weaning period but also during the pre-starter and the starter periods suggesting that piglets fed with POWERJET® were better prepared to face the stresses and the great changes occurred during this period. 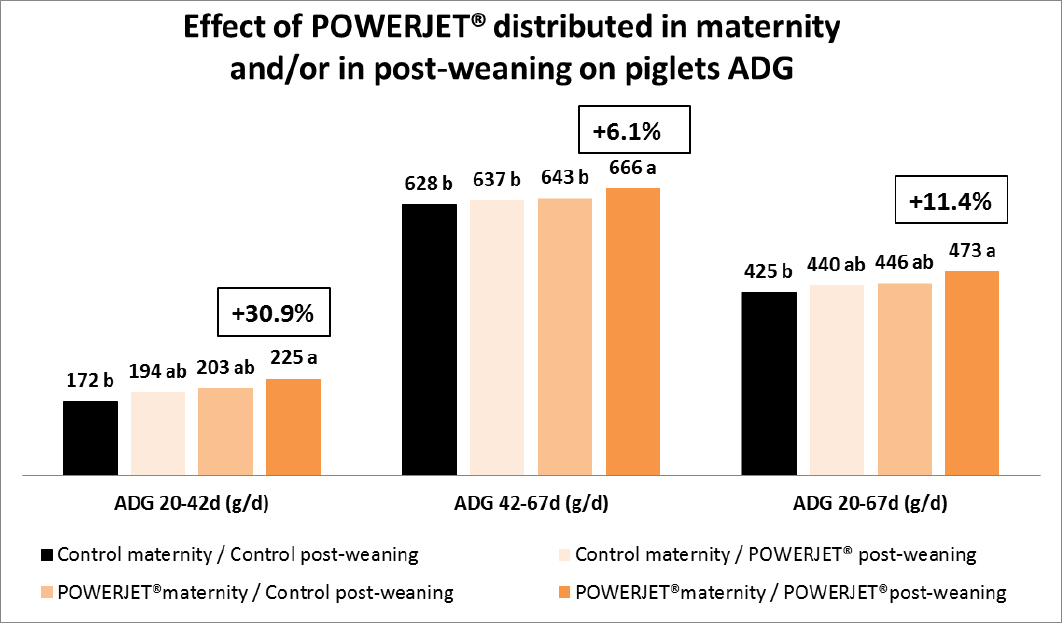 Live weight of piglets was significantly increased by +2.15 kg/piglet (p<0.01) in the group fed with POWERJET® in maternity and post-weaning compared to negative control group. This growth improvement is due to a higher feed intake (+48 g/d) and to better nutrients assimilation (-0.07 point FCR) as presented in Figure 6.

This trial has demonstrated the great impact of sow diet on piglets' performance. Best results were obtained when POWERJET® was distributed to sows from maternity period and then to piglets from weaning until the end of post-weaning period. A strong back-effect of POWERJET used in maternity, on piglets zootechnical performances in post-weaning is observed. Effectively, when POWERJET® is distributed in maternity, main effects are visible on piglets after weaning and not during the distribution in maternity. This result highlights the great impact of sows' metabolic stress' management on future piglets' performance.

The results of the in vitro trial performed on intestinal cell allowed to assess the anti-inflammatory properties of POWERJET®. This combination of plant extracts acts on the preservation of a gut health by preventing the leaky gut. Thus, better nutrient absorption and better nutrient use by the animals occurred when they are facing a stress period generating inflammation (farrowing, lactation, weaning..).

With POWERJET®, more energy is allocated to production purpose instead of amplifying inflammatory process.

Article made possible through the contribution of Wisium
Video >
Technical Paper >
What poultry producers should know about endotoxins
Effective endotoxin management is a crucial task for poultry producers, allowing them to safeguard their animals' health and productivity. In this second part of our two-part s ...
Mycotoxins in poultry: A hidden factor affecting flock health
The immune system is constantly under siege by different stressors. Stress, whether from disease or environmental factors, plays a critical role in the overall health and well-bein ...
Immunomodulatory effects of heat stress and lipopolysaccharide on the bursal transcriptome in two distinct chicken lines
Transcriptome analysis identified genes and pathways involved in bursal responses to heat stress and LPS and elucidated that these effects were greatest in the combined treatment. ...