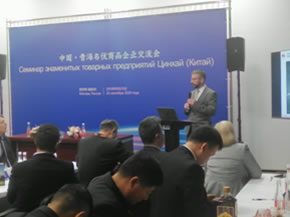 Cherkizovo Group (Petelinka and Pava-Pava brands) took part in a Sino-Russian workshop that focused on both China and Russia's bilateral relations and the Qinghai province, Cherkizovo reported last month.

The workshop was attended by representatives of Russian and Chinese government agencies, as well as employees and executives of major industry associations, including the Russian Grain Union, National Union of Poultry Farmers, National Meat Association, Russian Fruit and Vegetable Union, Potato Association and All-Russian Union of Oils and Fats (MZHSR).

"Poultry supplies to China are booming.  In 2019 and 2020, Russian poultry exports to this country are expected to total some 50 kiloton and over 100 kiloton, respectively," said Andrey Dalnov.  According to Cherkizovo, China may surpass Vietnam and Ukraine as the largest importer of Russian poultry products this year.

With annual growth rates at 2-3%, Russia's poultry market has almost reached saturation. Estimated to account for 5-10% of the overall output, halal products remain a niche segment domestically, making exports even more attractive to halal and other poultry producers, said Dalnov.

According to Dalnov, both the Chinese and Russian economies received a major boost when China approved some Russian companies as exporters in early 2019. China sources more than 70% of its poultry imports from Brazil, which Dalnov cited as a serious biosecurity risk.