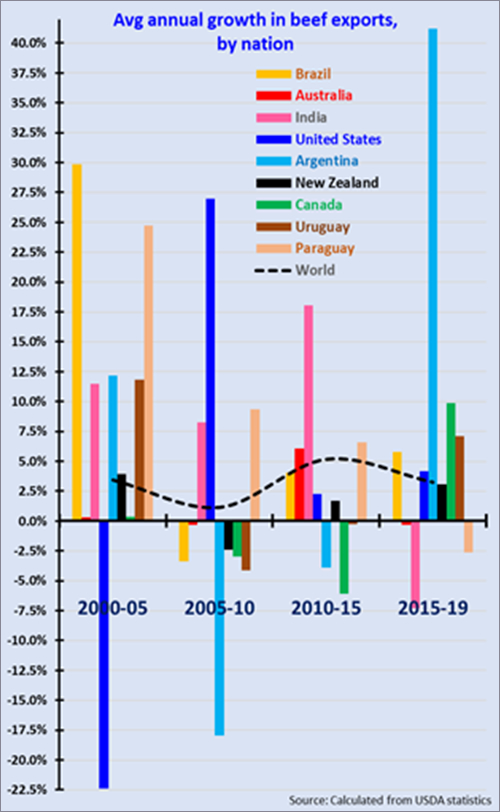 This is a recession year in the world beef trade's 21st century China-powered Cinderella story. From 2019's record 61.71 million tonnes, output is falling a USDA estimated 1.5% to 60.79 million tonnes. Due to the coronavirus induced meat processing stoppages and shipping disruptions in Australia, America, and Brazil, exports are falling from 2019's record 10.88 million tonnes to 10.66 million this year.
On one hand, since 2000, world beef production has lagged all other proteins, rising at a 0.7% annual rate. On the other hand, despite 2020's COVID-19 pandemic and many previous setbacks including mad cow disease, foot, and mouth disease, the world beef trade has performed surprisingly well. Since 2000, exports have grown at a 3% annual rate, slower than those of chicken(4.5%) or pork (6.5%) – but there was a considerable improvement after 2010.
From 2010 through 2019 inclusive world beef shipments grew at a 4.5% annual rate, faster than those of chicken (3.5%), though slower than those of pork (7.5%), as the late 2010s saw the swine trade stimulated by East Asia's ongoing ASF outbreak. This is an impressive performance by beef, which many analysts had expected to expand by less than 2% over this time.
On the other hand, our beef imports graph exposes an entirely different story: Even before COVID-19 broke out, total beef imports by the five top traditional importers (Japan, South Korea, Russia, Middle East, Southeast Asia) were lower than they were in the years 2010-14. In 2020, except for China, all top importers will buy less beef than they did in 2000. Moreover, all other nations (excluding China) bought the same quantity of beef in 2019 than they did in 2000 – and due to COVID-19's lockdowns, will buy even less this year.
Almost every nation except China is consuming (and importing) the same quantity or less beef than two decades ago. Formerly the world's top beef importer (and still the second largest), Japan went from consuming 1.05 million tonnes of beef in 2000 to between 0.64 and 0.80 million tonnes every year from 2004 through 2017. While this increased to approximately 0.85 million tonnes since 2018, it remains 20% below the volume of beef Japan imported two decades earlier.
From buying almost no beef in 2000, China imported 2.2 million tonnes in 2019 and will buy a USDA estimated 2.6 million tonnes this year. Without China, the world would have imported the same quantity of beef in 2019 it did in 2007. Without China, the world would be importing the same quantity of beef in 2020 it did in 2002-03.
A 60% rise in South Korean beef imports since 2000 (from 0.33 to 0.53 million tonnes) was not enough to offset the fall in Japanese imports of up to 0.5 million tonnes in some years. Similarly from 2000 to 2010, Middle Eastern beef imports jumped from a USDA estimated 0.32 to 0.64 million tonnes but stagnated below this peak level when the oil price boom ended. 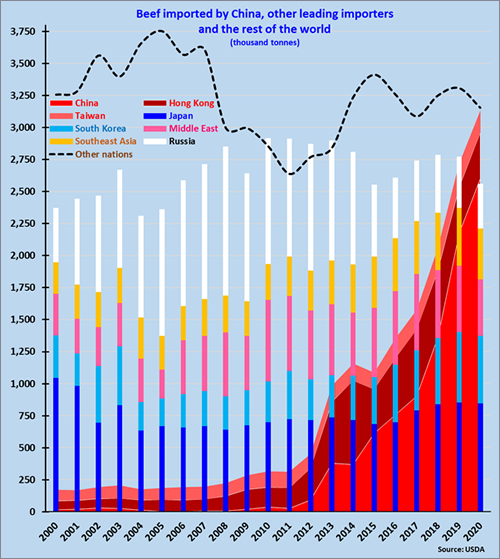