Table 1:  Effect on Tonisity Px on pre-harvest weights, overall, and per class of weight at birth

Figure 2:  Effect of Tonisity Px on distribution of pre-harvest weights, per class of weight at birth

b) for medium-weight pigs at birth (from 1 to 1.6kg liveweight at birth)

c) for heavy pigs at birth (above 1.6kg liveweight at birth) 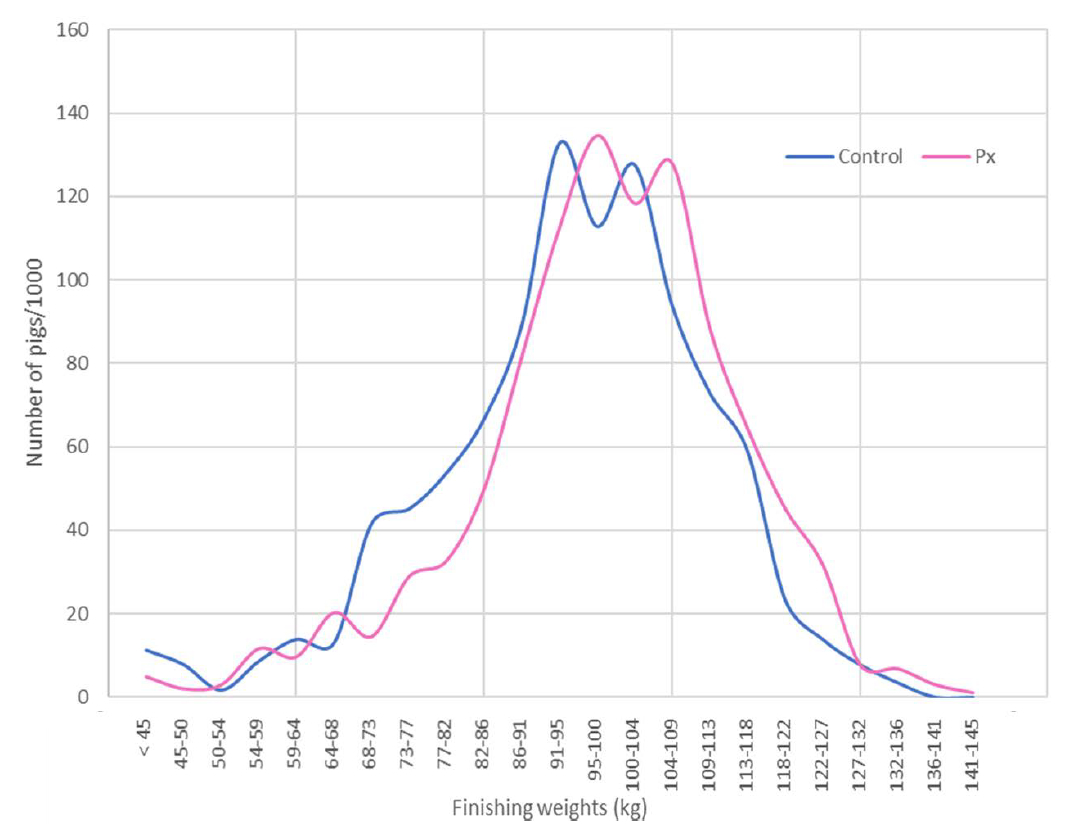 About Tonisity
Tonisity® International is an animal health company founded in 2015. Its focus is on developing supplementary nutritional products that create physiological changes in the gut of young animals.
Its first product, Tonisity Px™, launched in 2017, was the first isotonic protein drink for piglets. Originally developed in Northern Ireland, it is now available to producers globally.
Various trials across Europe have shown that Tonisity Px reduces pre-weaning mortality, increases weaning weights and improves the intestinal structure. It can also ease the transition to weaning.
A new product - Tonisity PxW™ WeanBetter - has been created especially for administration through weaner shed water lines to newly weaned pigs and is designed to be used as part of the Tonisity Total Programme.
For more information visit www.tonisity.com

Article made possible through the contribution of Mathieu Cortyl and Tonisity
Video >
Technical Paper >
What poultry producers should know about endotoxins
Effective endotoxin management is a crucial task for poultry producers, allowing them to safeguard their animals' health and productivity. In this second part of our two-part s ...
Mycotoxins in poultry: A hidden factor affecting flock health
The immune system is constantly under siege by different stressors. Stress, whether from disease or environmental factors, plays a critical role in the overall health and well-bein ...
Immunomodulatory effects of heat stress and lipopolysaccharide on the bursal transcriptome in two distinct chicken lines
Transcriptome analysis identified genes and pathways involved in bursal responses to heat stress and LPS and elucidated that these effects were greatest in the combined treatment. ...