Piglets face multiple challenges from the early stages of their life, actually since birth, a shocking experience in terms of temperature and change of environmental conditions. Besides that, piglets are born without a functional intestinal barrier and with an immature immune system.
The effects of weaning and the stress suffered by young animals during that period is severe and can have big consequences, also on the long term looking at performance. This major change in their early life makes piglets face a change in feed, which also impacts gut microbiota and consequently gut health.
It is also well known that stress has a negative impact on the immune system, making the animals more vulnerable to pathogens, microorganisms which might already be present in the gut but not causing any problems. When the gut barrier is affected, the pathogens will find their way into the bloodstream damaging the intestinal system. Severe cases of diarrhoea are inevitable by this time. Diarrhoea in piglets is one of the main causes of animal death before and after weaning, being a major threat for the pig production industry. It is also during this period in life that antibiotics are sometimes still needed, to help the animals overcome diseases and an overall poor gut health.
Over the last years, the need to replace antibiotics has been constantly on the rise, with a big focus on natural, plant based components with several mode of actions which can help the animals overcome the, many gut related issues arising during weaning.
After decades of scientific research, product development and testing, Silvateam has designed and directly produces Silvafeed® Nutri P, a blend of bioactices plant extract that meets this need within the swine nutrition sector. This product is a natural feed additive, rich in plant polyphenols, which exert many biological activities that can have beneficial effects for the intestinal health of piglets. Silvafeed® Nutri P is mainly used in the early stages of post-weaning and the fattening period.
Affecting the transit time
The most characteristic effect of this blend of bioactive substances is the astringent property, which slows down the peristaltic movement in the intestinal tract. Pigs fed on a diet supplemented with Silvafeed® Nutri P experience an increased transit time of the feed, therefore having more time to absorb the water from the digesta and preventing diarrhoea episodes around weaning. Several trials showed also the beneficial effect on the digestive mechanisms by reporting an increased level of digestion enzyme.
Feeding the microbiota
The animal production industry is getting more and more aware of how technical performance strongly depend not only on the nutritional aspect of a diet, but also when the gut microbiota is fed properly.
Due to the presence of its active components, Silvafeed® Nutri P carries out a selective bacteriostatic effect, thus promoting the growth of beneficial bacteria and strengthening the body's natural defences against most pathogenic bacterial strains, such as Staphylococcus aureus, Campylobacter jejuni, Salmonella typhimurium, Clostridium perfringens and Escherichia coli. These findings match perfectly with the results of other studies carried out on Silvafeed® Nutri P, highlighting this blend of plant extracts as an effective potential alternative to antibiotics. Silvafeed® Nutri P has also shown very promising results that make it stand out as a valid alternative to Zinc Oxide (ZnO) in a piglets' diet, both for medical and growth promoting reasons.
The usage of antibiotics and ZnO is always the consequence of some sort of impairment of the gut health. A healthy intestinal environment contains several types and families of bacteria, good and bad ones. They key is to balance this into detail, giving the animal the optimal situation to digest and absorb the nutrient as efficient as possible.
Firmicutes: Bacteroidetes ratio
Both in human as well as in mouse the Firmicutes to Bacteroidetes ratio (F/B ratio) has been extensively examined and already is a long-known parameter to take into consideration. It is just since recent times that feed industry players started to analyse this ratio, being the F/B
ratio in the gut microbiota linked to the efficiency in energy harvesting in different animal species. This field of research is very sophisticated and innovative. Silvateam has the knowledge and know-how in house to conduct these types of analysis and has shown during the last few years that it's will to cover that extra mile in terms of innovation and go deeper in the understand of these modes of actions.
Bacteria from the phylum Firmicutes are more efficient in the use of feed energy compared to those from the Bacteroidetes phylum. Very recent research reported an increase in this Firmicutes to Bacteroidetes ratio in animals fed with Silvafeed® Nutri P. This effect was also reflected in the technical results, characterised by a higher body weight gain, average daily weight and a better feed conversion ratio. At the same time, the proliferation of probiotic bacteria (Lactobacillus and Bifidobacterium) was stimulated as well, suggesting a prebiotic effect. 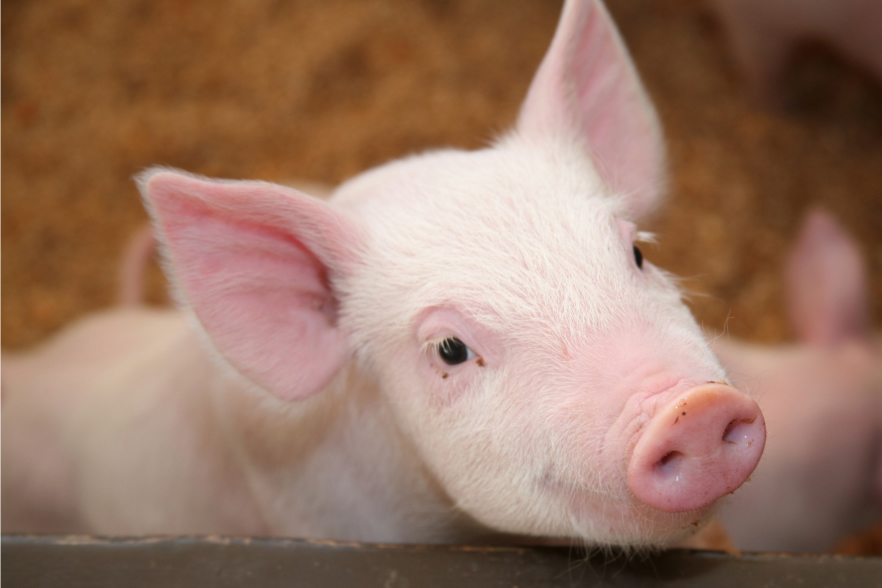 Balancing is the key
Escherichia coli diarrhoea is a multifactorial condition which usually occurs post weaning, when the gut health is suboptimal. This can cause serious economic losses for a farmer and subsequently for the entire pig production industry.
Lactic acid bacteria have been recently promoted as a potential alternative to antibiotics in pig production strategies. They can inhibit pathogens in the gastrointestinal tract and improve the microbial balance in the intestine, as well as regulate intestinal mucosal immunity. The in vivo effect of Silvafeed® Nutri P on intestinal microflora balance was assessed through the determination of the most common intestinal bacteria, lactic acid bacteria (LAB) and Escherichia. coli.
Silvafeed® Nutri P can seriously increase the lactic acid bacteria population on the one hand, while reducing the Escherichia. coli population. Furthermore, a strong inhibitory activity of this blend of plant bioactives against pathogenic bacterial strains was shown during in vitro studies. In several in vitro studies the potential use of this product to control Clostridium perfringens was examined. A rapid bactericidal effect against different strains of pathogenic Clostridium perfringens was observed after the addition of the plant-based extract. This effect is very strong and can been seen quite fast. A toxin-neutralising activity against the toxins being excreted by Clostridium was analysed as well, and was very strong.
Improving the gut barrier
The effect Silvafeed® Nutri P also affects the intestinal barrier, as shown by the results of several in vitro and in vivo trials carried out both in house and in top tier research centers. An healthy gut barrier is crucial to prevent pathogens from entering the bloodstream and lymph circulatory systems. Fundamental components of this protection are provided by the intestinal mucosal barrier which is composed of physical, biochemical, and immune elements. Keeping these various components able to ensure a physiological function in the presence of pathogens is essential to maintain gut health.
When the protection normally provided by the intestinal barrier fails, immune cells come in direct contact with luminal antigens. Stress, caused for instance by weaning or by a big change in the diet of the piglets, can cause such an impact on the intestinal barrier, therefore impairing their normal physiological barrier functions. Recent data highlighted the possibility that the use of Silvafeed® Nutri P in the diet could improve the intestinal barrier health, by both generating a thin layer to protect intestinal mucosa and enhance the integrity of intercellular tight junction proteins.
More surface for an optimal digestion
It is well known that a healthy and properly extended surface area is a key factor for an optimal digestion and absorption of nutrients, triggering an enhancement in feed efficiency and a good growth in animals. An important parameter is the microvilli area, which is related to an improved digestive capacity and an increased intestinal absorption surface. There are several trials done with Silvafeed® Nutri P showing increased villus height and crypt depth. It is then safe to say that this blend of plant extracts does indeed protect the intestinal mucosa and so facilitating a healthy gut microbiota. As a direct consequence of its effect on intestinal morphology, the blend of plant extracts improves the apparent digestibility of nutrients.
Interesting data from the Netherlands
The replication of the above summarised successful trials, carried out in different countries and continents, was the goal of Silvateam when asking Feed Innovation Services (Wageningen, the Netherlands) to conduct a trial on weaned piglets, in order to increase the results database regarding European data. The goal of this research was to evaluate the effects of supplementing Silvafeed® Nutri P on the performance of piglets, both technical and in terms of diarrhoea score.
The body weight in the first two weeks after weaning was numerically higher in the trial group (almost 10%), which also resulted in a higher body weight gain. The feed intake was slightly higher, due to the effect of Silvafeed® Nutri P in terms of palatability and appetite enhancement, while also the feed conversion ratio benefited from.

The fecal score was better for the trial group with good and dry manure in the first two weeks after weaning.
Overall, from these data it can be inferred that Silvafeed® Nutri P is beneficial in the weaner diet. The potential effect against bacteria and on the overall gut health can explain the higher feed intake, higher weight gain and the better feces score.
So, also in very good circumstances, like this high quality management farm in the Netherlands, Silvafeed® Nutri P diet supplementation shows its positive effects for the piglets after weaning, supporting the young piglets to grow out as healthy, well performing fattening pigs.
For more of the article, please click here.

Article made possible through the contribution of Silvateam

Video >
Technical Paper >
The importance of using the correct phytase at optimal dose
Phytate is a six-fold dihydrogen phosphate ester of inositol, specifically myo-inositol 1,2,3,4,5,6 -hexakiphosphate. Also known as phytic acid, it is considered the main storage f ...
Feed Enzyme Technology: Present Status and Future Developments
Exogenous enzymes are now well accepted as a class of feed additives in diet formulations for poultry and pigs to overcome the negative effects of anti-nutritional factors, and to ...
New enzyme application strategies to maximize feed cost savings, mitigate phosphorus excretion, and reduce carbon emissions
In recent years we are seeing a growing consumer interest in how food is produced, which is influencing the behaviour of the agri-food industry and the manufacture of feed. Althoug ...