Unseasonal rains, humid weather with high temperatures, drought, insect damage to crops, and insufficiently managed storage conditions can cause huge amounts of feed raw materials to rot away. This can lead to omnipresent parasitic or saprophytic growth of molds on feed raw materials with increasing mycotoxin contamination thus affecting feed and food security.

Molds produce secondary metabolites, mycotoxins, as defense against insect predation or competing microbes. Six mycotoxins, aflatoxins (AF), deoxynivalenol (DON), fumonisins (FBs), ochratoxin A (OTA), T-2 toxin (T2/HT2), and zearalenone (ZEN), out of more than 500 mycotoxins ingested through feed have been studied extensively for their impact on animal health and performance. In the field, animal producers are challenged many times with poor FCR, retarded growth, and high mortality. There is mounting international regulations on mycotoxins to protect human and animal health.

The presence of multiple mycotoxins today, particularly in complete feed, is a rule and not an exception. When occur together, many mycotoxins act in a synergistic or additive manner inside animal's body leading to unexpected and high toxicity. Unlike microbes, mycotoxins are heat resistant and survive common feed processing operations such as pelleting and extrusion. As a result of all these, the exposure of animals to mycotoxins is unavoidable today and hence prevention strategies should be applied at crop production, feed production and at animal facility levels.

In April 2020, the outcome of all the samples analyzed through Mycomaster from January to December 2019 was published in many national and international magazines. In continuation of this effort, samples analyzed from January to August 2020 were also evaluated for relative percent (%) contamination and mycotoxin concentrations. A total of 15,293 analysis were carried out for the 6 major mycotoxins (Table 1) and the sample analysis specifically from Asia region were 1,236.

Fumonisins were the most common mycotoxins as 90% of the samples tested contained quantifiable amount of mycotoxins. This was followed by DON, ZEA, OTA and Aflatoxins which were all found in around 70% of the samples. The presence of T-2 toxin was quite low (2%). The analysis for five Asian countries is given in Table 2 and although multiple mycotoxins were present in all the countries, the distribution of mycotoxins was quite different. For example, the major mycotoxins in Indian samples were AF, FBs and OTA while in China DON and FBs were the major ones.

In terms of mycotoxin concentration distribution, FBs occurred at highest concentrations followed by DON and ZEN (Figure 4). This is expected as these toxins generally occur at higher concentrations in grains and then contributing to complete feeds. The raw material import from Northern Hemisphere contributes to high levels of DON and ZEN. Although AF, OTA and T-2/HT-2 were present at low concentrations (<10ppb), they can be toxic to monogastric animals.

Similar to our 2019 survey, samples in 2020 survey showed the presence of multiple mycotoxins in different parts of world. Specifically in Asia, fumonisins are the major mycotoxins coming from locally grown raw materials, while deoxynivalenol and zearalenone seem to be contributing from imported grains to the complete feed. Unlike the normal understanding, protein sources do contribute to mycotoxins in the complete feed specifically deoxynivalenol, zearalenone and ochratoxin A. 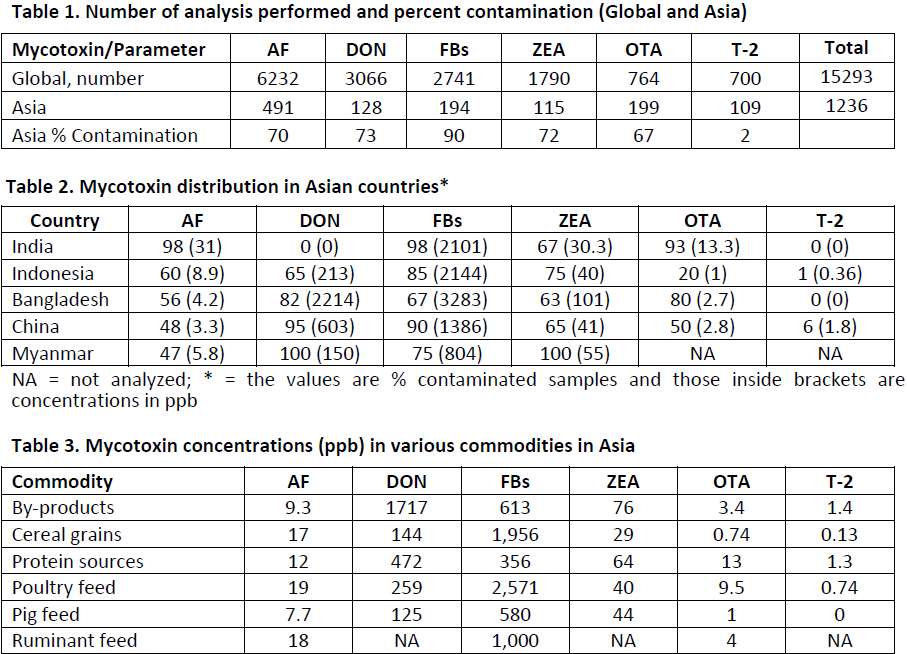