Following the trend recorded in June, EU exports of fresh and frozen pork in July rose 3% to 164,000 tonnes compared with a year earlier, according to data from Eurostat, AHDB Pork reports.

July export value, however, fell 9% year-on-year to €359 million (US$422.56 million) due to export prices across the region remaining around 14% lower than a year ago.

The overall volume growth in EU exports was attributable to South Korea, the Philippines and notably Ukraine, whose imports grew 15%, 24% and 400%, respectively.

Pork exports to China, the EU's largest market by volume, fell 5% or 2,500 tonnes year-on-year in July, returning to the recent trend of decline following a brief upturn in June.

Exports to Japan, the EU's leading export market by value, remained stable at 27,000 tonnes, although falling export prices to Japan eroded the value by 7% year-on-year. Pork shipments to Hong Kong also fell 44% or by 4,500 tonnes year-on-year.

In the first seven months, exports of fresh/frozen pork were around the same level as in 2017, although remaining above the five-year average for this period, at 1.22 million tonnes. However, export value was down 8% at €2.76 billion as export prices were 9% lower than the same period last year.

The value of trade to China in the period January to July was down 19 or around half what it was two years ago. This was largely due to the increasing domestic supply resulting from the modernisation of pig production and growing herd in China. However, with African Swine Fever (ASF) outbreaks in at least 20 sites, some of this supply could be under threat, depending on how the outbreak is managed, AHDB Pork said. 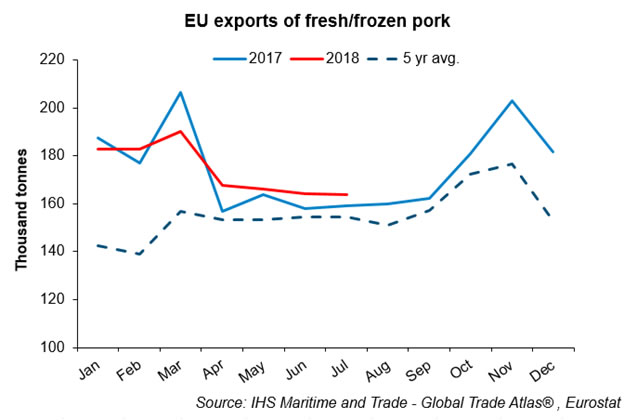