September 24, 2016
Livestock antibiotics: What you may not want to hear
By ERIC J. BROOKS
An eFeedLink Hot Topic 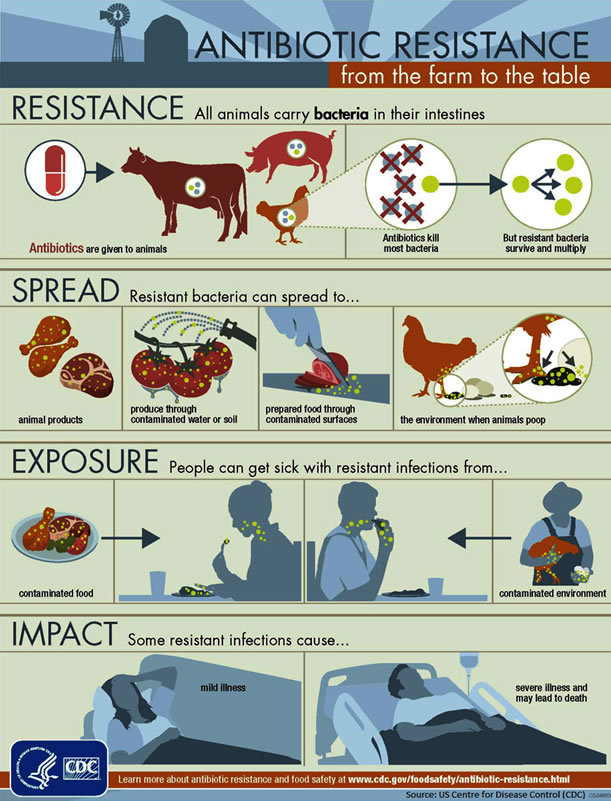 Adults are a lot like children in some ways, but not in others. Like children, grown ups frequently require corrections to their behavior. Unfortunately, whereas most children dutifully accept corrections to their behavior, adults can become hostile and defensive, particularly when billions of dollars are involved. Below, we explain why antibiotics growth promoters (AGPs) will be missed, but also why they must give way to natural, sustainable means of animal health optimization.
In many parts of the agribusiness industry, apologists continue to deny fifty years of mounting scientific evidence that antibiotic growth promoters (AGPs) harm human health. In the same week this report was being prepared, someone else wrote an article titled, "Only few antibiotic resistance caused by animal meat." This particular article, like many others, claims that very few antibiotics used in human medicine are used as AGPs, but omits three important points.

First, genes that resist antimicrobials used in livestock frequently also confer antibiotic resistance to chemically related antibiotics used in humans. For example, when bacteria develop resistance to ceftiofur (which is only used in dairy cattle), they frequently also become resistant to ceftriaxone, a chemically similar antibiotic that is used to cure pneumonia, meningitis and salmonella infections.
Paul Fey, a microbiology professor at the University of Nebraska states that, "There is a very clear link between ceftiofur use and ceftriaxone resistance," adding that, "We know that ceftiofur-resistant salmonella [bacteria] are clearly ceftriaxone-resistant."
According to a study published in the American Journal of Veterinary Research, when cattle are given one dose of ceftiofur, 40% of their surviving E. coli bacteria become resistance to within six days. Thereafter, resistant E. Coli bacteria continued to account for over 20% of the total population for two weeks. They may then enter the human food chain via dairy products or beef, and could possibly result in people not responding to treatment for salmonella, meningitis or respiratory infections.
Second, bacteria have been found to transfer their genes for antibiotic resistance to other bacterial species, thereby facilitating the spread of such lethal infections that have their origins in AGP-laced livestock guts into species which are pathogenic to humans.
Third, antibiotic resistant bacteria from livestock do more than use food or vegetable crops (where manure is applied) to enter the human health chain. Apparently, even the wind can carry them into your home: In a USDA-funded study, Philip N. Smith an environmental toxicologist at Texas Tech University tried to determine if steroid supplements given to cattle become airborne. Instead he discovered something else: Antibiotic resistant bacteria from dry cattle feces become airborne, travelling dozens of kilometres from their place of origin.
According to Smith, "The tetracycline resistance [in bacteria] was 400,000% more prevalent downwind [from the cattle feedlot] than upwind. At some downwind locations, the tetracycline resistance was in 100% of the [bacteria] samples." Bob Martin, director of John Hopkins University's Food System Policy Program called Smith's findings, "alarming", adding that, "I am afraid this might be a wildfire situation."
But we really don't need an ill-wind to become victims of AGPs used in livestock. According to America's Centre for Disease Control (CDC), out of population of 320 million people, 2 million Americans come down with antibiotic resistant infections every year. At least 430,000 of these people are known to have acquired their illness from antibiotic resistant bacteria found in their food. Over an 80-year lifetime, that implies that approximately 35 million Americans or over 10% of the US population will at some point, get food poisoning that could be traced back to antibiotic-laden livestock intestines.
The CDC also states that over 23,000 Americans die from antibiotic resistant bacteria annually. 90,000 are infected annually with methicillin-resistant staphylococcus aureus (MRSA). With antibiotic resistance that has been traced back to AGP use in swine, MRSA results in 20,000 deaths in the US annually, with a proportion of other cases also requiring the amputation of limbs.
Quite a large number of untreatable US hospital infections are also traced to bacteria that gained their immunity to antibiotics at livestock farms. A study published in Britain's Lancet determined that 39% of post-surgery infections and 57% of post-chemotherapy infections are caused by antibiotic resistant bacteria.
In addition, several vegetable food poisoning outbreaks that occurred from the mid-1990s through the mid-2010s featured antibiotic resistant bacteria that had been apparently transferred to crops via the application of livestock manure to farm fields.  Whether acquired directly through food, hospitals or wind currents, infections from bacteria that gained antibiotic resistance in livestock intestines is now a common occurrence.
For example, a 2013 to 2014 US Salmonella Heidelberg outbreak that sickened 634 persons and resulted in the hospitalization of over 200 people in 27 states was traced back to the California poultry farming operations of Foster Farms. At Foster Farms, CDC Researchers found that two-thirds of the bacteria were resistant to at least one antibiotic –and over half of the bacterial population was resistant to three or more different antibiotic classes.
The CDC investigation concluded that, "Salmonella Heidelberg strains linked to Foster products proved resistant to a variety of antibiotics…Some of those drugs belonged to the same classes as penicillin and chlortetracycline." -which are of course, widely used to treat human infections.
A Reuters investigation which reported this incident ("Farmaceuticals: The drugs fed to farm animals and the risks posed to humans.", Brian Grow, P.J. Huffstutter and Michael Erman, 15 Sept 2014) noted the following: "When Reuters asked to see Foster Farms' feed from that period tickets [which would reveal if any antibiotics were being used as AGPs] the company didn't respond to that request." This implies that at the very least, some US integrators are disregarding FDA guidelines, which urged them to stop using medically important antibiotics as AGPs.