Inflammation is a complex physiological response of the immune system to various foreign and/or harmful stimuli that expose the host (Medzhitov, 2010). This physiological reaction, when it involves the gut and gets prolonged and dysregulated, is termed "chronic inflammation" and, can prove detrimental in production terms. This is in contrast to "acute gut inflammation" which starts rapidly and within a short period becomes severe (James, 1993). It has been well established that the chronic (low-grade) inflammatory response in the intestine, results in nutritional malabsorption and the disruption of the digestive function, and consequently, in growth retardation (Cardoso Dal Pont, et al 2020). A notable feature of inflammation is its high energetic cost. Research has demonstrated that pro-inflammatory pathways promote muscle catabolism to supply amino acids and energy substrates for immune responses. These shifts in systemic metabolism may also explain the detrimental effects on performance and carcass traits commonly associated with chronic inflammation which results in economic losses (Niewold, 2007). Several biotic and abiotic stress factors in poultry production can trigger chronic inflammation, including low-level (but persistent) infections, toxins (bacterial endotoxins and mycotoxins or pesticide residues in feed), anti-nutritional factors in feed, change of feed at different growth stages, bad quality of feed e.g. oxidized fat or contaminated feed, vaccinations, environmental conditions such as heat and stock density (Kogut et al, 2018). Moreover, the industry after the ban (partial or complete) of antibiotics in sub-therapeutic doses as growth promoters is facing a steep rise of 'chronification of inflammation' with significant economic losses. In fact, 'chronic inflammation' gets worsened by the synergistic and additive negative impact of these stress factors which when combined can predispose to disease. Regulating the inflammatory response and diminishing the frequency and intensity of the inflammation by ingredients with controlled anti-inflammatory activity could be a useful strategy to limit the detrimental effects.

Therefore, there is a clear need to identify a pool of gut health biomarkers that will help us develop nutritional interventions with increased gastrointestinal functionality. Lumance® (Innovad®, NV/SA Belgium) is a complex blend, combining slow release and protection technologies ensuring that fatty acids, essential oils, plant extracts, and antioxidant compounds are delivered in an active way to the gut. In our previous in vitro studies, we demonstrated the synergistic anti-inflammatory, the enhancing gut integrity properties, and the anti-pathogenic properties of Lumance® (Khadem et al., 2017). The present study aimed to study the ability of Lumance® to counteract the chronic inflammation induced by a dietary challenge in real broiler field conditions. To this, selective intestinal biomarkers were used alongside key performance indicators.
Materials and methods
Evaluation of in-vivo growth promotion and anti-inflammatory activity 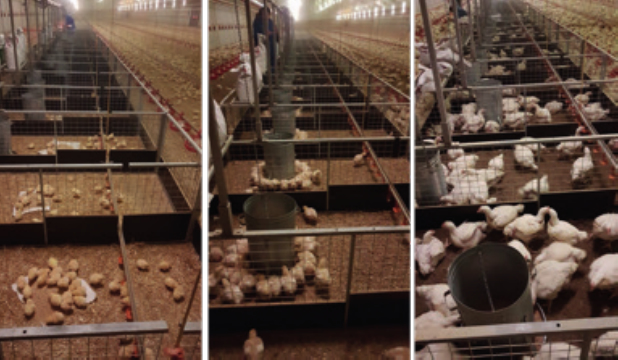 The experiment is a completely randomized design of treatments with Lumance® at three different concentrations (0, 1, and 2 kg/ton) in the feed. Growth parameters were determined during the experiment and the anti-inflammatory effect of the dietary treatments was measured by the jejunal level of the proinflammatory cytokine (Interferon-gamma (IFNγ)), and as well as that of Malonylaldehyde (MDA) on day 28. A total of 540 male broiler chickens (Ross 308), aged 1d old, of similar mean body weight (BW; 46·5 (SEM 0·01g), vaccinated for Newcastle disease, were obtained from a commercial hatchery (Vervaeke Belavi, Belgium). The chicks were housed in pens of 1·2 m2 and raised on wood shavings at an experimental set-up inside a commercial farm (Figure 1). The experiment was carried out in 18 pens with 30 broilers per pen, and 6 pens per treatment. For each pen, one broiler was randomly chosen, and samples of mid-jejunum were taken on day 28 for the determination and measuring the biomarkers of inflammation. Commercial starter, grower and finisher diets were offered to the broilers from 1 to 14 d of age and 15 to 28 d and from 28 to 35 d of age, respectively. All feeds were mash wheat-rye based diet without coccidiostat, NSP enzymes, and anti-cocci vaccination (Starter: 60% wheat; Grower & Finisher: 60% wheat + 5% rye). Feed and water were provided ad libitum throughout the experiment.
Growth parameters
BW, FI, and FCR were determined on days 14, 28, and 35. FI was corrected for mortality, which was recorded daily.33
Intestinal expression of the pro-inflammatory cytokines and oxidative damage
A 5 cm section of the mid-jejunum was taken from the 18 chicks on day 28. The chymus was removed by washing with ice-cold PBS, and the mucosa was scraped off with a glass slide. Scrapings were snap-frozen in liquid nitrogen (N2) and then kept at – 80°C until analysis. Then, total proteins were extracted from the tissue samples using tissue extraction reagent (Thermo Scientific, Waltham, MA) containing protease and lipase inhibitors (Sigma-Aldrich, St. Louis, MO). Intestinal luminal levels of IFN-γ were determined using a Chicken IFN-γ Cytoset ELISA kit according to the manufacturer's specifications (Invitrogen Corporation, Camarillo, CA). Briefly, an anti-chicken IFN-γ antibody was coated to the 96-well plates. The plates were blocked after washing. Then, the detection antibody (anti-chicken IFN-γ biotin) was added. After incubation, the colorimetric reaction was induced. The plates were read at a wavelength of 450 nm. Data were expressed as pg/ml. Lipid peroxidation as a trigger of inflammation was estimated by measuring malondialdehyde by reacting it with thiobarbituric acid under high temperature and acidic conditions (Cayman Chemicals, Ann Arbor, MI). The resultant products were colorimetrically measured at 530 nm using the protocol outlined by the manufacturer. Data were expressed as µM.

Fig. 1.  Experimental setup inside a commercial farm
In order to provide a challenge, in the present experiment, a high amount of wheat and rye with no coccidiostats were used in any of the experimental diets.
Statistical analysis
Statistical analysis was performed with Graphpad for windows 10.  All data were checked for outliers and normality of the residuals.  Bodyweight (BW), feed intake (FI), feed conversion ratio (FCR),  and intestinal biomarkers were analyzed using linear regression  models. Residual plots were checked to evaluate model fit.  Statistical significance was assessed at P ≤ 0.05.
Results and discussion: 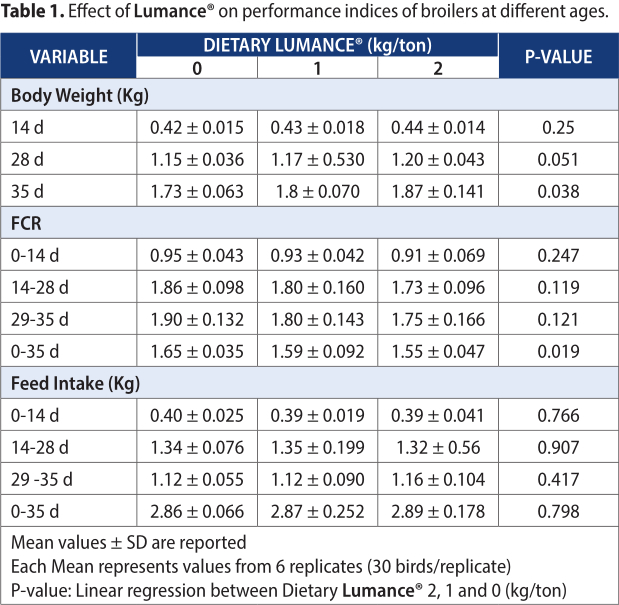 IIt is well established that stress, regardless of its origin or nature (biological, environmental, nutritional, physical, or chemical) leads to inflammation and the release of pro-inflammatory cytokines (Baxter et al 2019, Hermans et al 2012). Cytokines activate immune cells and have a profound detrimental effect on growth performance (Niewold, 2007). It was shown that broilers consuming wheat and rye-based diet for 20 days increased the systemic level of pro-inflammatory cytokine (IFNγ) which contributed to an increase in inflammation (Chen, et al 2015). Non-starch polysaccharides, together with resistant starch and lignin, that form the whole of dietary fiber of wheat and rye, have been reported to exhibit multiple biological functions that can induce intestinal chronic inflammation (Nie et al, 2017). Several mechanisms of action of NSPs on nutrient absorption and inflammation have been described that include an increased digesta viscosity, thickening of the mucous layer on the intestinal mucosa, epithelial cell apoptosis (Teirlynck et al, 2009), and the nutritional and economic consequences of mounting an inflammatory response in poultry are inversely related to bodyweight gain and overall performance (Tellez et al 2005 ). In our study, a high amount of wheat and rye with no coccidiostats and cocci vaccine were used in all experimental diets as an in-vivo model of chronic inflammation.
The effects of the three dietary treatments (Lumance® 0, 1, 2 kg per ton) BW, FI, and FCR are summarized in Table 1. Overall, Lumance® enhanced BW significantly in a linear manner at 35d (P = 0038). Supplementation of Lumance® with 1 and 2 kg/ton increased the bodyweight of broilers by 3.6 % and 6 % respectively, compared to the control (Figure 2a). Concerning the feed conversion ratio, over 0–5 weeks, Lumance®-fed chicks significantly improved the FCR in a linear manner (P = 0019) (Figure 2 b). Regarding the feed intake, no differences were observed between the treatments over the 5 weeks (P = 0.305) (Figure 2c). Mortality was not significantly (P > 0·05) associated with treatment but was mostly associated with the typical symptoms of coccidiosis. Several in-vitro and in-vivo studies have identified the anti-inflammatory effects of fatty acids and polyphenols. The intestinal concentration of the pro-inflammatory cytokine Interferon-gamma (IFNγ), was significantly affected by the dietary treatments.

Fig. 2.  Regression analysis of a) body weight (BW) and b) feed conversion ratio (FCR) and c) Feed Intake (FI) of broiler chickens (Ross 308) fed with a Feed Challenge Diet* containing different doses of Lumance® (mean values ± SD are reported; n = 6, 30 birds per treatment).
Birds supplemented with Lumance® exhibited a lower proinflammatory cytokines IFNγ at d 28 compared with none Lumance® supplemented birds (P = 0.023) (Figure 3). These results are consistent with what we expected from the antiinflammatory activity of Lumance® and it is well correlated with our previous in-vitro finding (Khadem et al., 2017). The present result for pro-inflammatory cytokine (IFNγ) is similar to the findings of Klampfer et al., 2003. who reported that shortchain fatty acid (butyrate) exerts anti-inflammatory activity by the inhibition of interferon γ production. However, reduction in cytokine synthesis during inflammation is thought to be a major mechanism by which Lumance® reduces inflammation, although the exact pathways and mechanisms involved remain to be elucidated. Malondialdehyde is a lipid peroxidation product, and. MDA content can, therefore, be an indicator of membrane injury. ROS-induced lipid peroxidation triggers inflammation and generates cytokines. For malondialdehyde (MDA), a significant linear decrease in jejunal expression was found in Lumance®-treated chicks (P = 0.03) (Figure 4). Concerning growth promotion in production animals, it can be concluded that feeding Lumance® could reduce the detrimental effect of chronic inflammation and oxidative stress, thus could counteract the synergistic and additive negative impact of several stress factors, typically seen in the field. 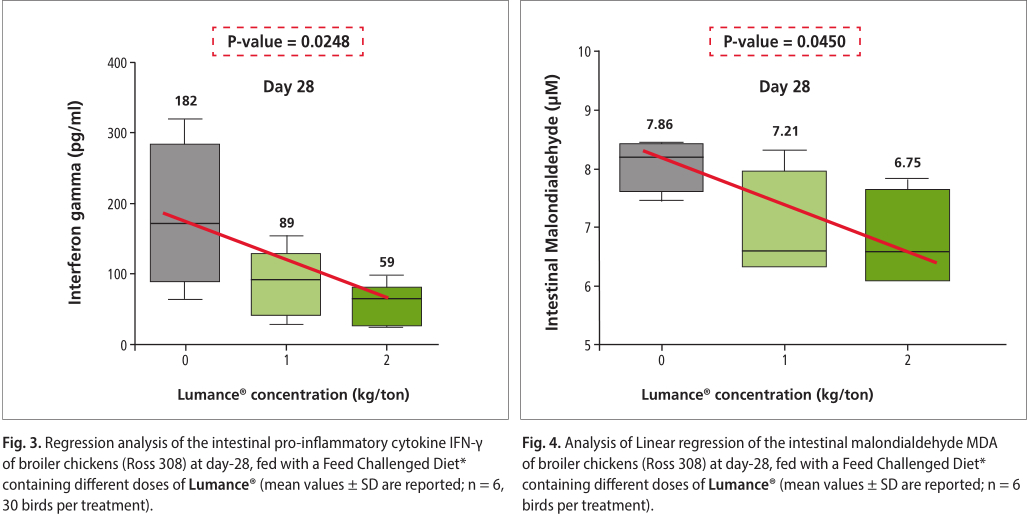 Article made possible through the contribution of A. Khadem et al.