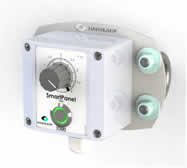 Hanskamp has recently won an Innov'Space award for its SmartPanel with MultiDos system at this year's SPACE livestock trade fair in Rennes, France.

Developed for safe and efficient liquid addition in dairy farming operations, SmartPanel with MultiDos allows an automatic and precise dosing of liquid additions in a feeding mixer. The dosing pump, MultiDos, is used to dose - in very precise quantities - liquid additions on a feed station.

SmartPanel with MultiDos not only secures dosing of liquid additions but also allows its user to control dosing from his cabin, without having to climb on the feeding mixer to add liquids by bucket. The equipment's automation helps to save time, increase efficiency in milk production, and as a result, save cost and reduce liquid addition wastage.

With a 'plug and play' feature, SmartPanel with MultiDos is user-friendly and easy to calibrate.