Nutritional strategies that support the immune system, promote intestinal integrity and functionality, and increase tolerance to stress and disease challenges are of interest to the poultry industry. In addition, early nutrition has been recognized as an opportunity to further advance nutritional practices and improve overall performance and the health status of commercial broiler flocks. For more than three decades, ample information has been published on the use of spray-dried plasma (SDP) in piglets detailing consistent benefits on the above-mentioned areas making it an established practice in the modern swine industry. Still, comparatively little information has been developed in poultry. Renewed interest on the possible use of SDP in broilers has recently shed light on its potential use in broilers, on how it modulates the immune system in poultry, on the type of benefits expected from its use commercially, and on strategies to use this functional ingredient profitably.

What is spray-dried plasma?

Spray-dried plasma (SDP) is a dry powder rich in functional proteins obtained from the blood collected during the processing of animals intended for human consumption. The method of extraction involves the separation of red cells from plasma, high temperatures and pressure resulting in a homogeneous and innocuous white-cream powder. It contains a complex mixture of proteins such as albumen, globulins, transferrin, growth factors, bioactive peptides, amino acids and other nutritional components. When circulating in the body, these compounds support biological functions such as those related to growth, tissue repair, defense mechanisms, and reproduction.

Figure 1:  The immune system is intimately connected to other systems. 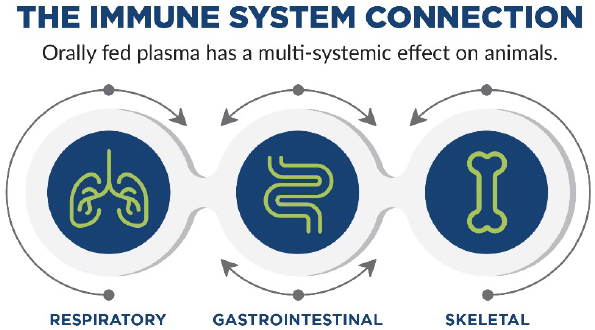 What is its mode of action when fed to young chickens?

Feeding SDP has been associated with an increased immune response efficiency as suggested by various trials conducted in rats, mice, and pigs. In these animals, induced inflammation either by stress or by pathogen challenges, is significantly reduced by SDP supplementation regardless of whether the primary sites affected are the gastrointestinal, respiratory or the reproductive tracts. The data available suggests that SDP supports immune efficiency which, from a nutritional point of view, is a high energy and nutrient demanding response; thus, using SDP directs more nutrients to growth and productivity.

The capacity of plasma to reduce gut permeability, improve nutrient uptake and structural integrity in healthy animals or in the presence of leaky gut, was recently investigated n chickens. These responses are likely mediated by an improvement in intestinal barrier integrity and functionality probably due to less inflammation at gut level managed by a reduction in the expression of pro-inflammatory cytokines, and by an elevation in the expression of anti-inflammatory cytokines, along with an increased expression of defensins. Data showing a reduction in lymphocyte activation and infiltration, lessening of edema, and changes in the gut microbiota, have been published in mammals. Collectively, these changes suggest an immune modulation effect of SDP and an increased restauration of mucosal homeostasis. Similar effects have been reported in other mucosal systems like the respiratory and reproductive, indicating that the effects of feeding SDP are not limited to the gastrointestinal tract.

The high protein digestibility of SDP is also of interest when feeding young chicks since they have inherent difficulty digesting dietary protein. Sources like soybean meal leave unabsorbed proteins available for pathogens to proliferate in the gut. Average ileal digestibility of 95 and 96% for SDP vs 83 and 87% for soybean meal in 10 and 21 days-old chickens respectively have recently been reported. Higher dry matter, organic matter and crude protein digestibility of the complete diet in 7 days-old chickens when supplementing SDP has also been observed. These effects could be long lasting as suggested by reported higher intestinal sucrase, maltase and alkaline phosphatase activities in 24d old broilers fed 2% plasma for the first 5 or 10 days of life.

What to expect when feeding SDP in the first diet in chickens?

Feeding SDP to broilers in the first few days of life improves economically important parameters at the end of the production cycle such as weight gain, feed efficiency and livability in seemingly healthy flocks in both, control studies and field experiments. Likewise, greater resistance to disease and stress has been reported in numerous conditions like coccidia vaccinated chickens, in chickens under a natural outbreak of Necrotic Enteritis, in birds challenged with Salmonella sofia, in broilers with very high mortality where E coli and Streptococcus were isolated, in chickens subjected to heat stress, in a flock with a history of inclusion body hepatitis, in chickens subjected to stress due to high stocking density and in turkeys challenged with Pasteurella multocida suggesting that the effect in immunity is unspecific and systemic.

A reduction in mortality is frequently reported not only in challenged situations as in the reports above mentioned, but also in seemingly healthy flocks with seemingly commercial mortality rates, whether subjected to field conditions or in floor-pen studies.

Information looking at the response of SDP in broilers indicates that the first few days of life are critical when supplementing SDP to chickens. As chickens eat a small amount of diet in that period, the total investment per chicken is relatively low. Recent work suggests that a cumulative total SDP intake of 3 to 4g per chicken fed in the first few days of life captures a significant amount of value making the practice economically feasible. This would imply feeding between 1 to 2% in the first diet depending on the length of the feeding phase. For example, a starter diet fed from 0 to 7, 0 to 10 or 0 to 12 days of age could have a level of SDP of 2, 1 or 1%, respectively which, given the typical feed intake observed in those phases, would result in a cumulative intake of SDP of about 3 to 4g per chicken. Feeding less than 1% is not recommended in broilers since the response seems to be shaky, while special pre-starter diets fed for less than 5 days could require up to 2.5-3% of SDP addition.

The price of SDP can vary among regions but typically the investment of feeding 3 to 4g of SDP per chicken is covered by a reduction (improvement) of 1 point of feed conversion (i.e., - 0.01) which is a value observed for many feed additives currently used by the poultry industry globally. 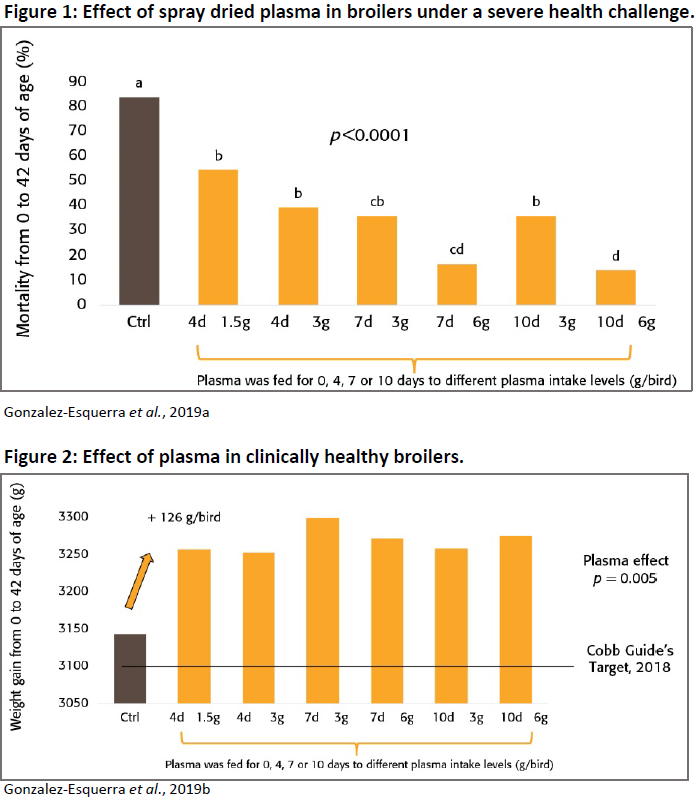 Altogether, these data indicate that feeding SDP in the first diet in broilers modulates the immune system, improves gut health and nutrient absorption, improves performance at slaughter age in healthy flocks and increases the tolerance to diseases and stress in a wide variety of situations. Additionally, these benefits are observed even when the challenge occurs at some point after SDP is no longer fed, which illustrates the importance of the first few days of life for future health and performance in broilers. A reduction in mortality is frequently observed in challenged and unchallenged flocks which may relate to its immune modulation effects. Given these benefits, feeding 3 to 4g of SDP per chicken is economically feasible in most regions of the world.