September 18, 2019
Tomorrow's seafood giant forever?
Brazil has long been touted as a future aquaculture exporting powerhouse but production growth is has been disappointing, especially for value-added species. Can this resource rich nation leverage abundant resources for a 2020s farmed seafood boom?
By Eric J. Brooks
An eFeedLink Hot Topic 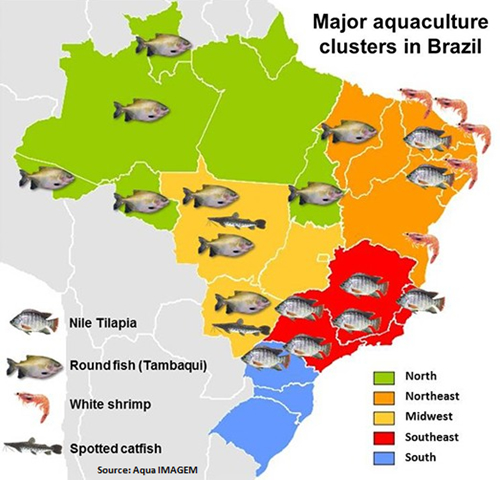 It may be Latin America's undisputed meat exporter but Brazil's aquaculture sector has lagged badly. On one hand, Brazil has been endowed with an exceptionally long 8,500km of warm water coastline, plus an additional 4.2 million hectares of inland freshwater raising area, much of it deep inside the Amazon Basin or within its Cerrado savannah lands.
Aquatic growing conditions range from cooler regions comparable China's northeastern coast to extensive tropical regions similar to Southeast Asia. With coastlines and climates comparable to China and Southeast Asia (where produce 80% of world aquaculture), Brazil at first glance appears to be the best place in the world to expand aquaculture output in the way East Asia did over the last three decades.
Superficially, Brazilian aquaculture's growth sounds impressive: From 13,000 tonnes worth U$56 million in 1987, farmed seafood output totaled 597,000 tonnes and US$1.5 billion in 2017. By that year, it accounted for 20% of all Latin American and Caribbean aquaculture output.
On one hand, based on FAO statistics, from 2000 through 2017 output across all species expanded at a 7.5% annual rate; and a still respectable 4.5% pace since 2012. Even so, this is far below the growth rates seen in such early development stages in China, Southeast Asia, or even neighboring Ecuador.
On a volume basis, tilapia accounted for approximately 48.5% of 2017's farmed fish output, followed by traditional native species making up 38%. Crustaceans are almost completely accounted for by shrimp and made up 10% of output. Mollusc's 3.5% share made up the rest, with South American rock mussels making up most of this amount and cupped oysters accounting for less than 0.5%. 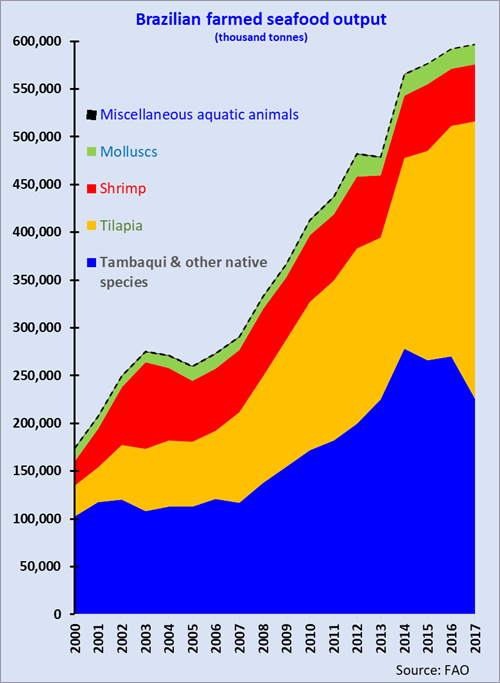 Among species native to Brazil, tambaqui, tambatinga, tambuca and (to a lesser extent) catfish, bony fish and pacu play the same role as carp and catla does in China, Myanmar and India: They are keynoted by high output, low returns but have been first fished and later farmed for a far longer time than newer, more value-added varieties. Tambaqui is the largest farmed native species line. It can mostly be found in Amazon basin rivers, as well as highland tributaries near western Brazil's land borders with neighboring nations.
Much like Chinese carp or Burmese catla, their large output is counterbalanced by low value-added and limited investment. For example, despite having less than a third of round fish production volume, shrimp exceed them in sales revenue. Hence, tambaqui and its native relatives are to Brazilian aquaculture what eggs are to livestock -a seafood line whose consumption flattens out as incomes and overall protein demand continue rising.
Even so, output of Tambaqui and other native fish nearly tripled from 102,500 tonnes in 2000 to 278,000 tonnes in 2014, before leveling out in recent years. This was both due to drought conditions in the mid 2010s as well as farmers shifting to the cultivation of more profitable species.
Leading the charge in Brazil's cultivation of value-added species is tilapia, which now makes up a majority of farmed seafood output. It is mainly raised in ponds in Western Paraná state, with cage culturing done in northeastern Brazil.
The latter are usually freshwater bodies situated near the Jaguaribe River (Lakes Castanhão and Orós) or the San Francisco River (Lakes Sobradinho, Itaparica, Moxotó and Xingó). Cage-based tilapia farming is also done in southeastern Brazilian lakes, rivers such as the Rio Grande, Paraná, Tietê and Paranapanema or their tributaries, which run through the states of Mato Grosso do Sul, Paraná, São Paulo, Paraná, and Minas Gerais.
With no shortage of warm water in which it can be raised, tilapia output has grown exponentially. According to the FAO, it increased 32,500 tonnes in 2000 to 290,000 tonnes in 2017 and an estimated 320,000 tonnes in 2018. From under 10% of Brazil's aquaculture output in the mid-1990s and 19% in 2000, tilapia's share of Brazilian aquaculture production exceeded 50% in 2018.
Despite these impressive numbers, Brazilian tilapia is rarely exported and even has problems keeping part of its domestic market. According to an FAO report released this year "off flavor due to inappropriate farming practices has been a negative factor deterring consumers' acceptance of farmed tilapia."
A similar story haunts the country's second most valuable aquaculture line: Shrimp are mostly cultivated offshore on Brazil's eastern equatorial coast, usually on the Amazon river delta or within several hundred kilometers of it. From 2,000 tonnes in 1995 to 25,388 tonnes in 2000, output tripled to 75,000 tonnes in 2012. Thereafter, the appreciation of Brazil's currency, disease and sustainability issues keeping production in the 60,000 to 70,000-tonne range. 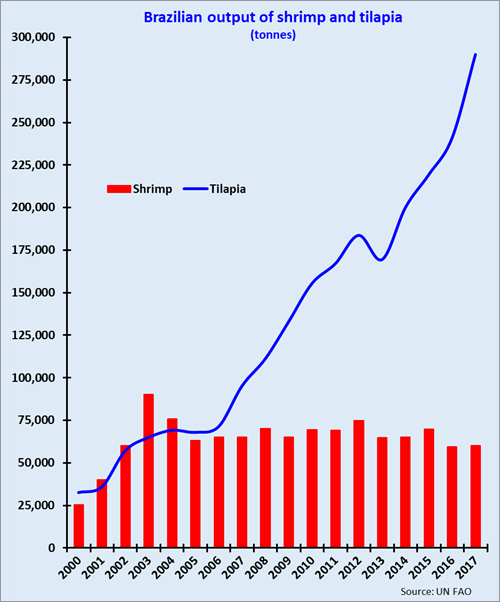 The problem is that it is not just one issue holding Brazilian aquaculture back but a wide array of them. For tilapia and native freshwater species, their inland cultivation areas are often located far from major roads or railways. This makes their transport to large coastal cities and ports not only expensive but problematic: Compared to soybeans (which face similar transport issues), tilapia and roundfish species require around the clock refrigeration and more processing prior to transport.
The lack of transport infrastructure and cold chain facilities in remote production regions is made worse by the fact that compared to their Asian rivals, Brazilian seafood farmers have difficulty obtaining the credit and financing required for making capital investments in more efficient, automated farm management and monitoring systems.
Moreover, even well-capitalized foreign multinationals face problems establishing new farms: Foreign investors note it is far more difficult to get environmental permits to undertake commercial farming of value-added species in Brazil than it is in Southeast Asian nations or even neighboring Chile and Ecuador. Moreover, at the same time Brazilian aquaculture output is growing at only half the rate it could be expanding, pollution is causing its export-driven wild catch production to fall -with an insufficient increase in farmed production to offset it.
Farm management is another problem, with Brazilian seafood growers often taking the same short-sighted cost-saving attitude seen in China and Southeast Asia. Inferior but low cost feed gives the nation's tilapia a below average taste and flavor. A similar unwillingness to invest in quality rather than cost minimization ensures that the same diseases that held back shrimp production in China, Thailand and Malaysia also did so in Brazil.
As a result, Brazil went from exporting 112,687 tonnes of seafood in 2003 to 51,000 tonnes in 2017. Over this period however, seafood imports rose from 172,000 tonnes to 412,000 tonnes. The trade performance is even worse than it appears: China and Southeast Asian countries blessed with smaller warm water coastlines and abundant inland freshwater have per capita seafood consumption in the 25kg to 40kg range and are large net exporters.
Despite having far more warm water resources and a long coastline, Brazilians only eat 8kg of seafood per capita but are still unable to supply themselves from domestic production. Brazilians grow slightly under 4kg of seafood per capita, compared to China's 36kg or the world average of 12kg. 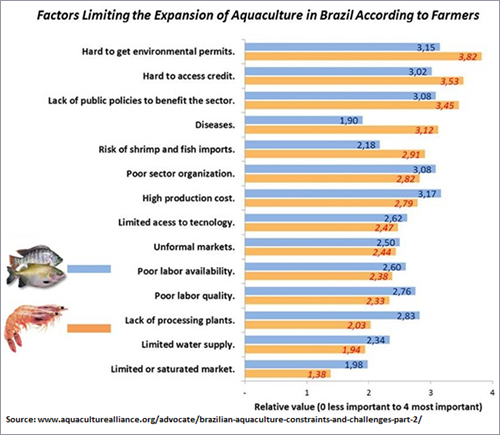 The good news is that even though all the above problems were made worse by two serious recessions and flat meat consumption over the last five years, aquaculture output expanded at a 4.3% annual rate from 2012 through 2017. That implies that once Brazil's economy recovers, aquaculture output can grow by 6% to 8% annually -and in the 10% to 15% range -provided the government addresses the issues holding it back.
We know this because in the early 2000s, Indonesia was also held back by economic and political crisis. Once these abated and economic growth resumed, its aquaculture output and consumption expanded by over 7% annually.
The only difference is that Brazilians have much higher personal incomes than Indonesians but eat 5.3 times less seafood per person. In Brazil's case, the first few years of rapid growth would come even more easily, as they would entail import substitution rather than exporting.
Thereafter, Brazil could leverage its abundant water and feed resources greater into export-driven 10%+ annual growth, similar to what this nation did with its beef and poultry trades during the late 1990s to mid-2000s.
Commenting on the inability of soccer to catch on in popularity in the United States, one commentator said "soccer is the future of American sport -and always will be." Up to now, the same has been true of Brazilian aquaculture, which repeatedly failed to leverage this nation's promising array of natural resources. With Brazil's new government making many policy changes, many wonder if it will set the table for a decade of rapid, profitable growth.